Big promises were made long before tonight’s meal when, in 2009 chefs Mak and Leung opened a 30-seat hole-in-the-wall restaurant in their home city of Hong Kong called Tim Ho Wan. One year later that humble dim sum eatery was awarded a Michelin Star for its now-legendary pork buns.
Those same buns are why people line up along the street to get a seat at any of Tim Ho Wan’s 20-plus restaurants. Those buns are what we’ve come for. Will they deliver on their one-star promise?
As we approach the recently opened Bourke Street restaurant, it’s a relief to find no queue on this particular Tuesday night. That said, the floor-to-ceiling windows reveal the light-filled, open dining space with only a handful of tables unoccupied it its 120-seat restaurant. 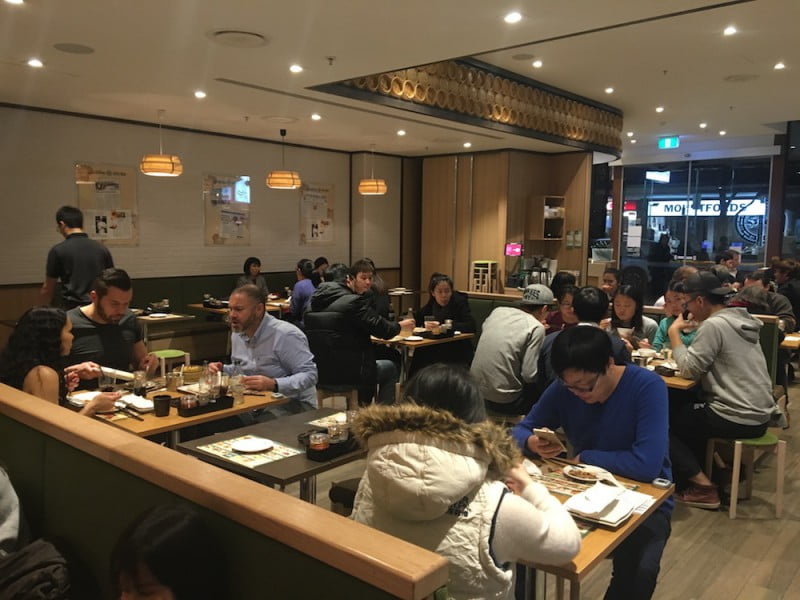 Once inside, Asian pop fills the air and harmonises with the diner’s chorus of chatter, creating a lively and comfortable atmosphere that fills the starkly-decorated space.
The simple décor consists of little more than wall panels made from bamboo steamers and a few minimalist lampshades dotting the ceiling. They leave it up to the food to do the talking at this restaurant.
The alcoholic offering at Tim Ho Wan starts and finishes with beer. Bottles of ice cold Tsingtao and Tiger beer are on offer, and swiftly appear on the table along with plastic pot glasses to drink from.
Our waiter, Alonso, shakes his head with a resolute ‘no’ when asked if the menu has been modified from the original Hong Kong restaurant for Australian tastes. He does say though, that while the recipes are true to the original, the locally sourced ingredients might change the flavor slightly. 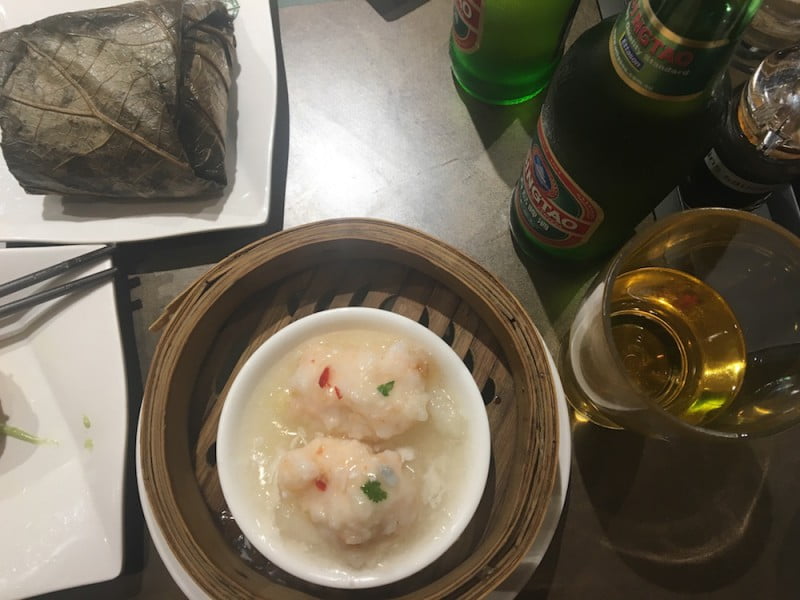 The canteen-style paper placemat menu lists 25 dishes including the ‘Big Four Heavenly Kings’, a reference to the four Buddhist gods who watch over their respective corners of the world.
Of the big four, we tick the boxes for three on the paper order form which makes up a six-dish meal; vermicelli roll with pig’s liver, pan-fried turnip cake and, of course, the baked pork buns. The fourth king is a steamed egg cake which looked tasty but we’ll save that for a return visit.
The three baked pork buns ($7.80) arrive, identical in size and colour; their perfection hinting at the taste experience that’s to come.
Biting into the outer crust is a wow moment! It’s consistency sits somewhere between cake and pastry, both fluffy and flaky and as light as air. A light dusting of very fine sugar coats the outside which is a prelude to the daring, sweet pork jam treasure that’s wrapped up inside. The promise kept, we quickly regret ordering just the one serve. You did good, Tim Ho Wan. You did good.
The wasabi salad prawn dumplings ($7.90) make up for it though, with three perfect parcels of sweet, succulent minced prawn wrapped in the crispiest shell. Topped with a wasabi mayonnaise and finished with a sprinkling of orange roe jewels, texture and flavours are in abundance. 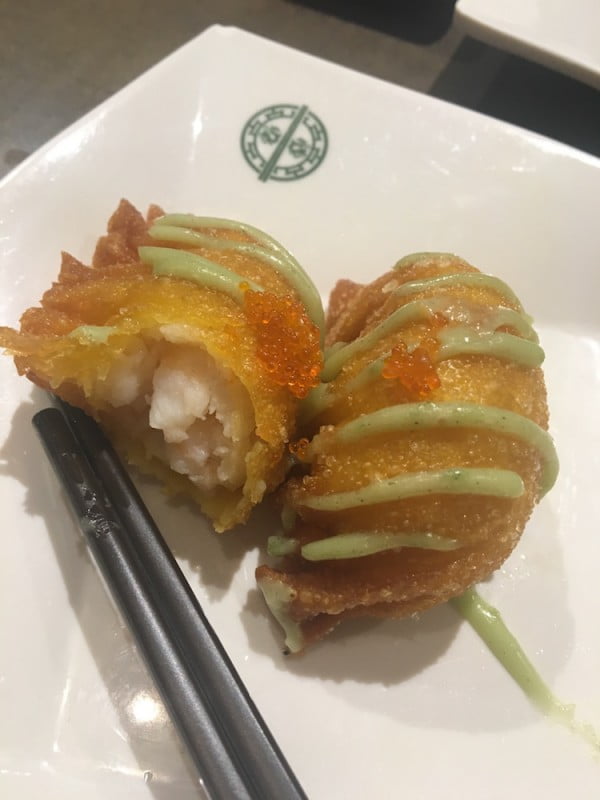 The pan-fried turnip cake ($6) is a soft square that, once in the mouth, is reminiscent of overcooked pasta with none of the firmness of the turnip remaining. The subtle flavour borders on bland and doesn’t quite hit the spot.
The next dish is quite the opposite though. The waiter arrives, bringing a stack of three vermicelli rolls with pig’s liver ($7.50) and drizzles soy sauce over them before he leaves.
The pasta is soft to bite and its light flavour balances the rich, earthy pieces of liver which has a slight firmness and a suede-like texture. These are delicious and it’s apparent why they’ve been granted royal status on the menu.
The order of fish maw with prawn paste ($8.80) is an interesting dish. Fragrant, juicy prawn paste balls, similar to that in dumplings, balanced atop the savoury and slightly-salty maw (fish air bladder) which has a stretchy grainy paste-like feel on the tongue. It gets full marks for flavour but the texture of the maw is an acquired taste.
We round the meal off with what is a contender for a place on the Heavenly Kings menu. Glutinous rice in lotus leaf ($8.80) was chosen after seeing it on our neighbouring diner’s table.
The food-envy is justified as we unwrap the neat lotus leaf parcel to reveal another parcel inside; a square of sticky rice that, when opened, is harbouring a generous portion of deliciously tender chicken, fragrant, gamey sausage and mushroom in a rich gravy inside. The flavours mingle beautifully and the the savoury goodness is soaked up by the rice. 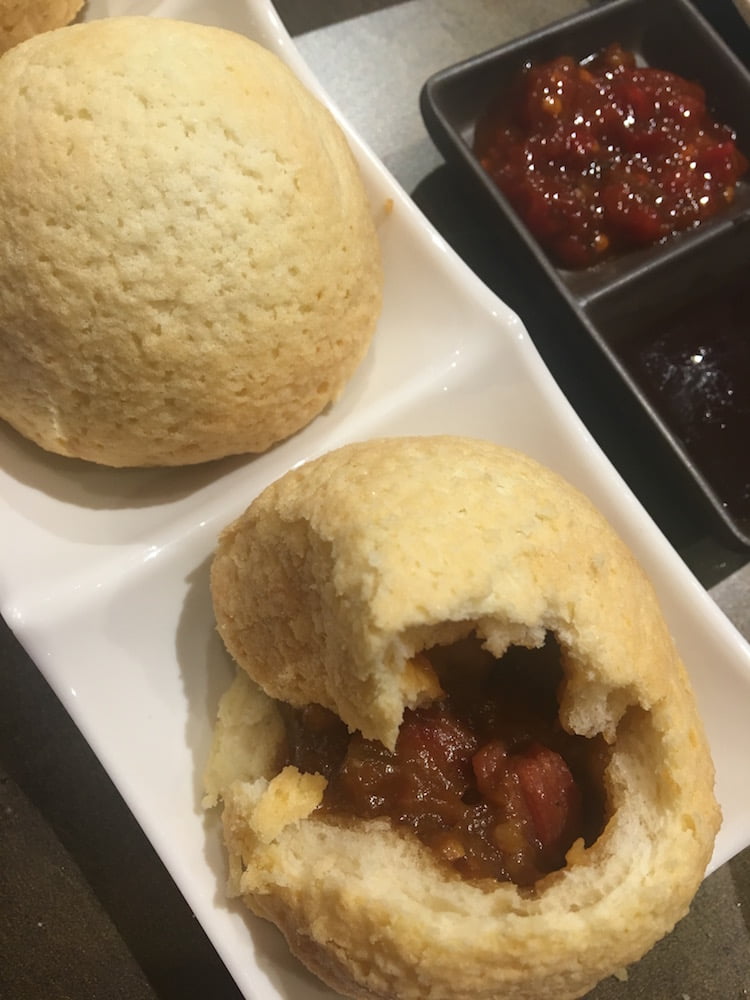 The one downside to this dish? There’s only one piece of sausage and mushroom in the mix, which is a problem when two chopstick-wielding foodies are sharing.
After gorging ourselves on the six savoury dishes, there is no room for dessert. But if we had to choose one, the tonic medlar and osmanthus cake ($5.80) which looks a slice of orange jelly, was our pick.
Would I go back? Absolutely! Would I queue up along Bourke Street with other hungry diners to get a table? Probably not. But that says more about my lack of patience than it does about the food.
Drinks are light on the menu at Tim Ho Wan, but if you’re looking for a good cocktail to top off your evening, take a wander round to 1806 Bar who are masters are their craft.

Tim Ho Wan
206 Bourke Street, Melbourne
Open Mon – Sun 10am – 10pm
http://www.timhowan.com.au
If you love dumplings you have to check out HuTong in Prahran. Check out our review here.