Oriental Teahouse is a mainstay in the Australian dining scene with the original Chapel Street restaurant opening 10 years ago. But veteran restaurateur David Zhou, who now has three Oriental Teahouses and David’s to his name, is as concerned with fostering a congenial atmosphere in his teahouses as he is about upholding the high standard of food served in each of his restaurants.
Oriental Teahouse is very much a family business; under the tutelage of David and his wife, the Zhous’ eldest daughter now manages the Chapel Street restaurant, while their younger daughter is a waiter at the same branch, waiting in all likelihood to ascend the restaurant ranks as her sister did. Zhou has carefully handpicked his staff – each of them is equipped with in-depth knowledge of every dish on the menu and they bounce off each other’s warmth and enthusiasm.
David is constantly reinventing the wheel, which is how we find ourselves at Oriental Teahouse on a wintery Wednesday night, where we’ve come to sample the relaunched menu which features old stalwarts along with exciting new additions.
Another new addition to the line up is Zhou Zhou Bar which sits atop Oriental Tea House and is the perfect place for those who want a drink without the side of food. But tonight we dine, and we start with everyone’s favourite – dumplings!
The ginger and prawn dumplings are the most popular dumplings at Oriental Teahouse and it’s not hard to see why; finely chopped prawns interlaced with the feint notes of ginger are well seasoned and moreish. 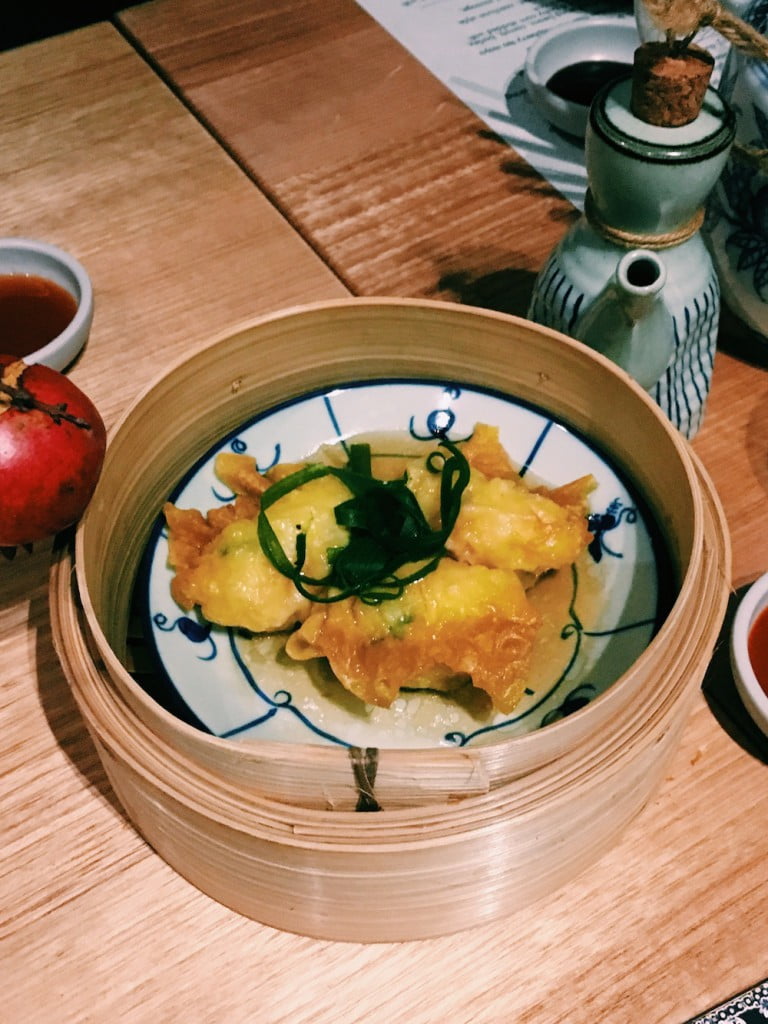 We’re served a variation of these with prawn, spinach and basil dumplings in a ginger and lemon sauce with added vegetables and herbs resulting in more complex flavours. David tells us that the prawn, spinach and basil dumplings are constantly evolving and that the parcels can’t be too round due to the generous proportions of meat contained within them. 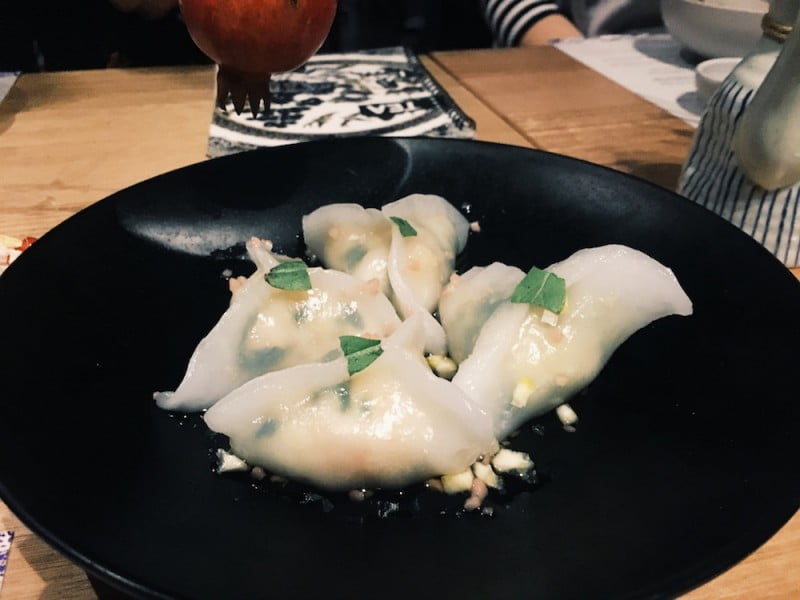 The roast duck dumplings come encased in a rice flour, beetroot infused dumpling wrapper, drizzled with syrupy Peking sauce. The duck to dumpling wrapper ratio is generous, with the richness of the duck complementing the sweet notes of beetroot in the gelatinous skin. 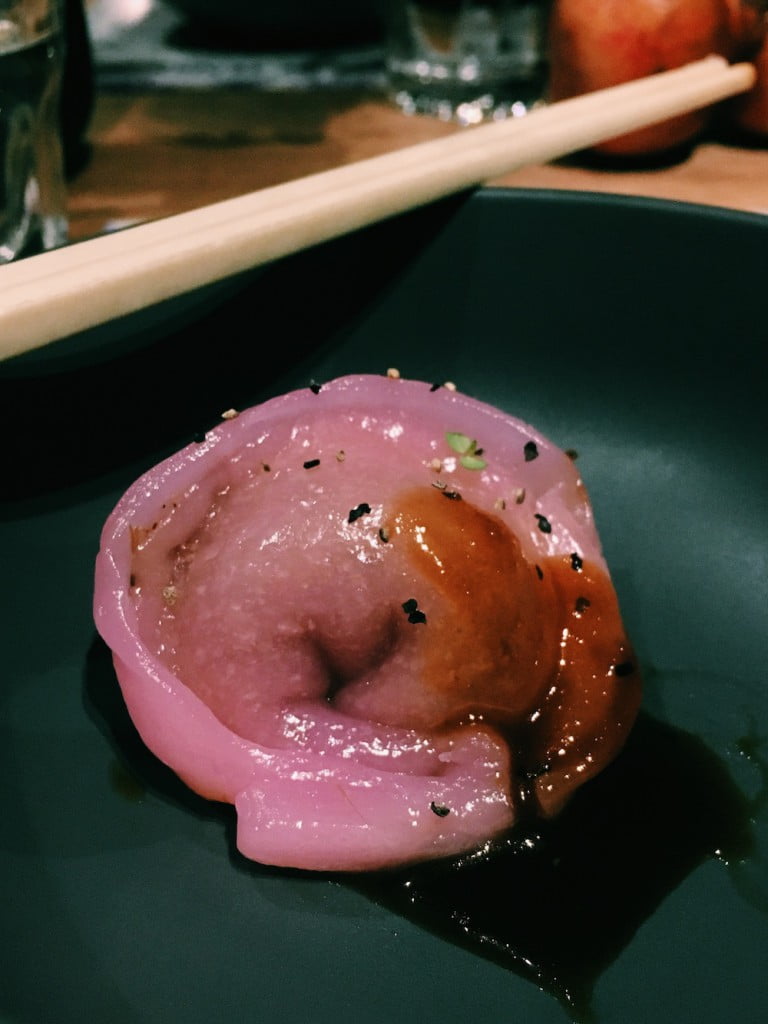 David isn’t one to steadfastly stick with tradition and  the next dish is an unusual offering, the flame-thrower pulled pork dumplings.  The filling is akin to something you’d find in a burger instead of a dumpling and it’s interweaved with sparing bits of pork belly for something truly different. 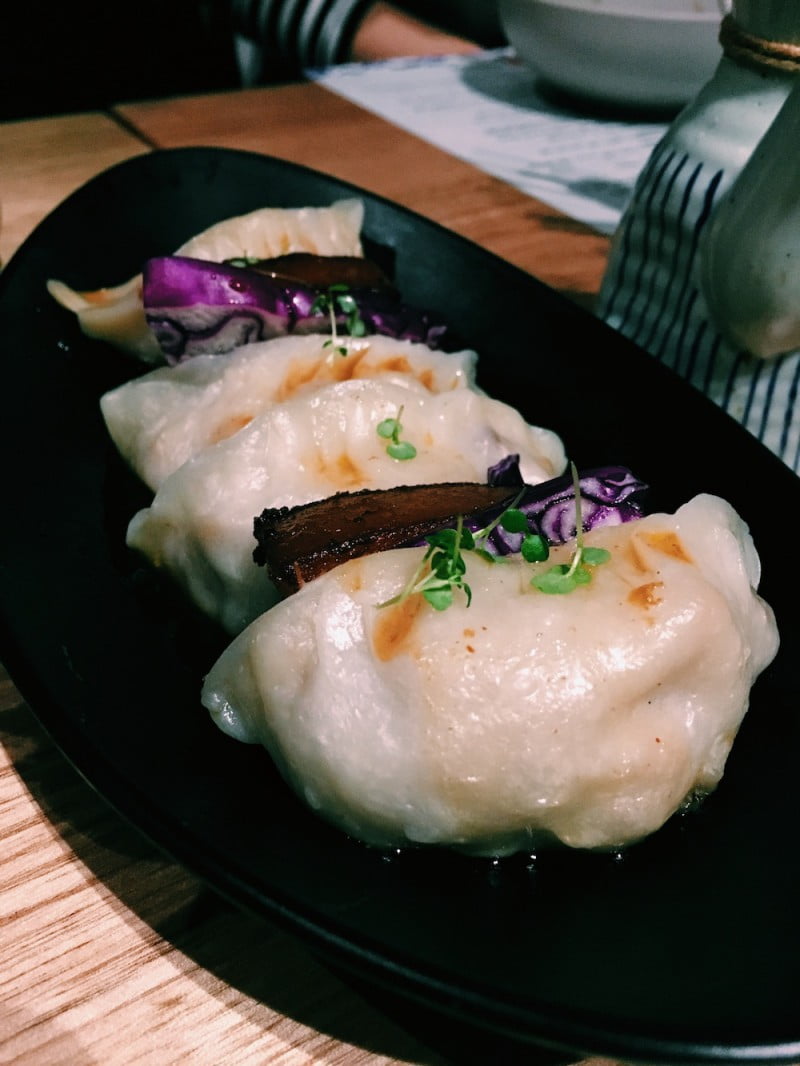 Another round of dumplings is delivered to the table that’s so experimental it was designed by a customer who won a competition – enter the chilli wagyu beef dumplings marinated in kaffir lime and served in a homemade chilli oil. Generous proportions of chilli oil pool collectively within the folds of the yellow wonton wrappers, culminating in a pleasant explosion of flavours on the tongue. 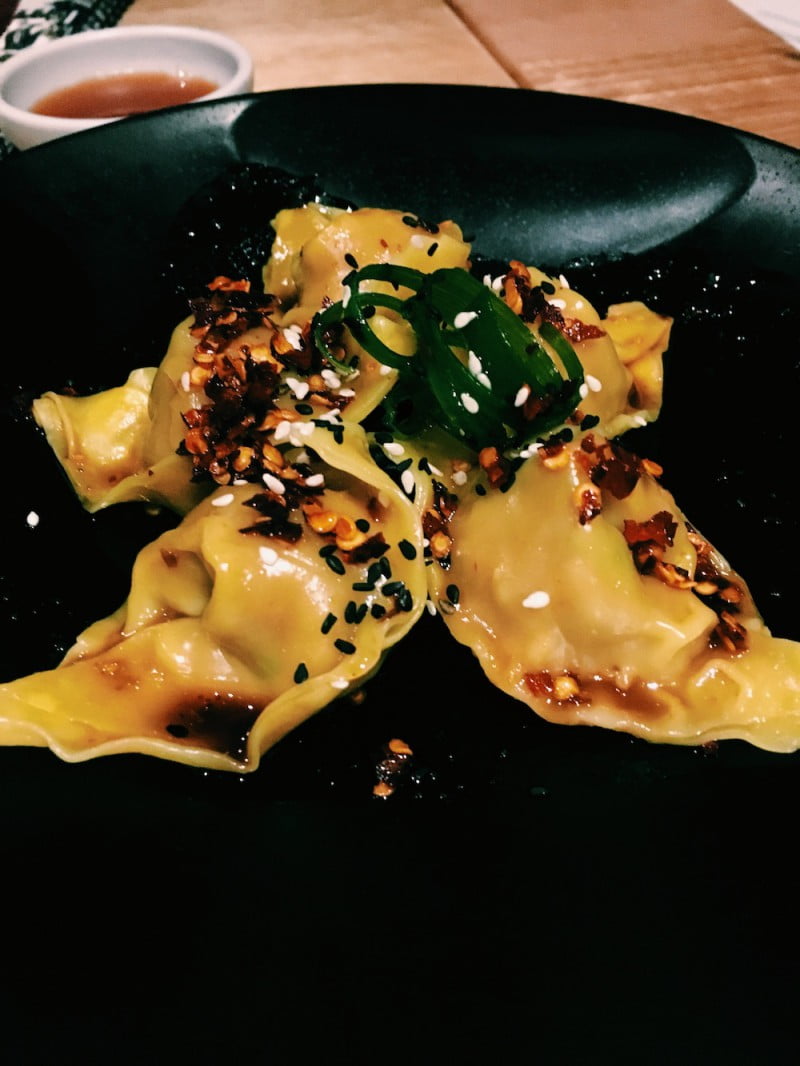 We’re now five serves of dumplings in and have seven main dishes still to work our way through. David’s culinary events are marathons that call for endurance, not sprints, and I find myself regretting all the extra dumplings I’ve just eaten. But as the dishes are brought to the table one at a time, I know there’s always room for just a little more…
The flash-fried beef is coated in a sticky sweet chilli sauce alongside string beans and sesame seeds. It’s addictive and we find ourselves polishing off a second round of these because the patrons on the other end of the table were mostly vegetarian – and because it’s delicious! 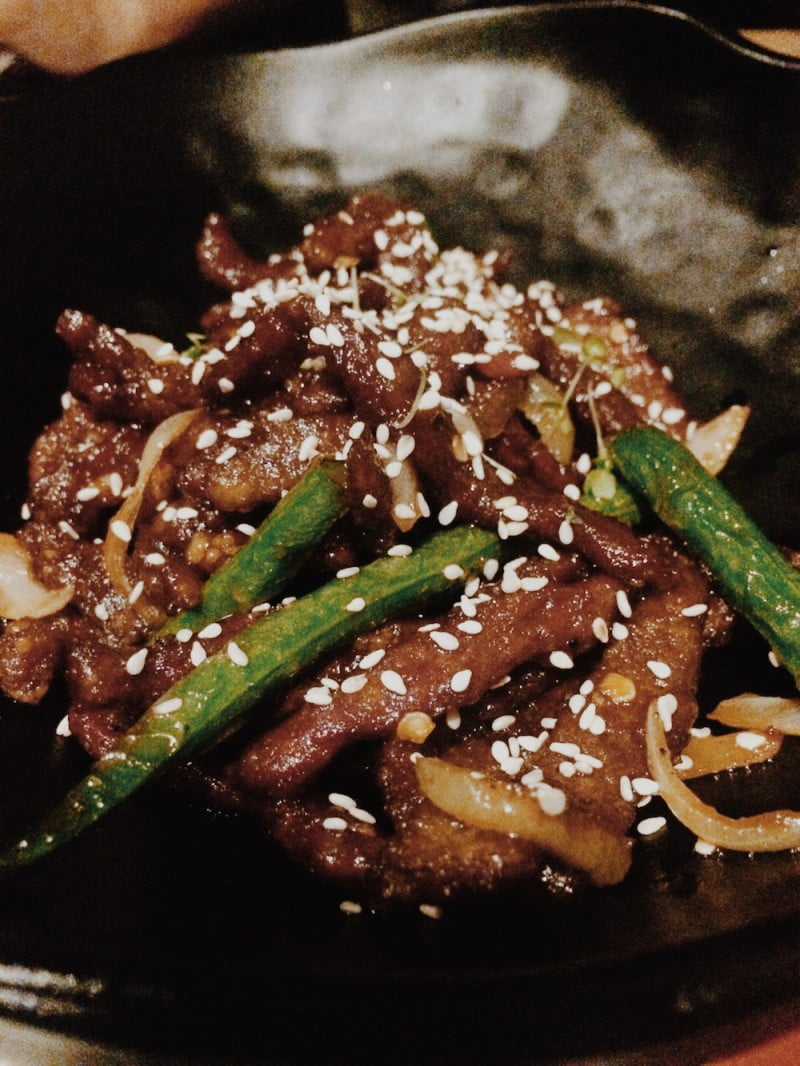 Everyone’s favourite salt and pepper calamari arrives and it’s comes doused in a generous sprinkling of wonton crisps, red chilli and spring onions. As you’d expect from the ingredients, the combination of the flavours and textures make this a memorable dish. 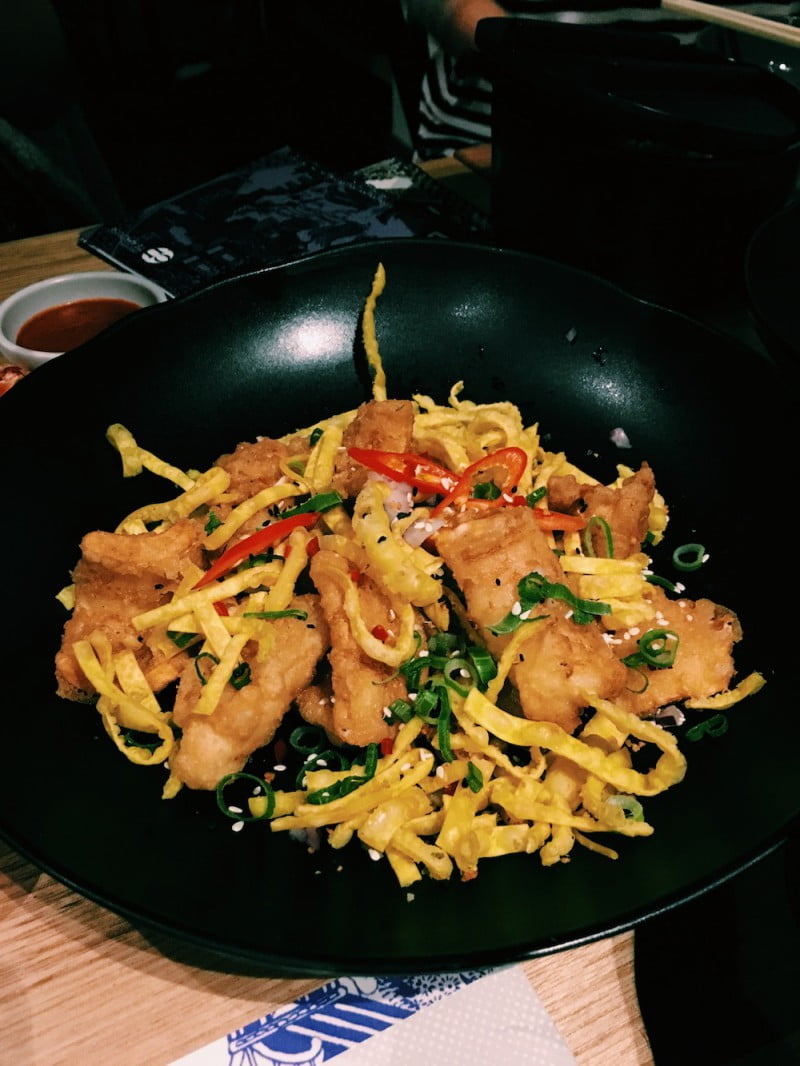 The bite-sized pieces of exceedingly tender steamed chilli and garlic fish slither easily off our chopsticks, requiring us to take extra care in transporting them from the main serving dish to our respective bowls. The lotus leaf imbues the fish with an wonderful earthy fragrance.
Crisp lotus medallions perfectly complement the oolong tea smoked chicken. And true to David’s penchant for new and wonderful combinations, these come with a sweet raspberry tea mayo.
House-made tofu has the numbing quality that was made famous by the Szechuan peppercorns hiding in its midst, while the stir-fried Asian vegetables with goji berries and roasted black rice have a surprising crunch. 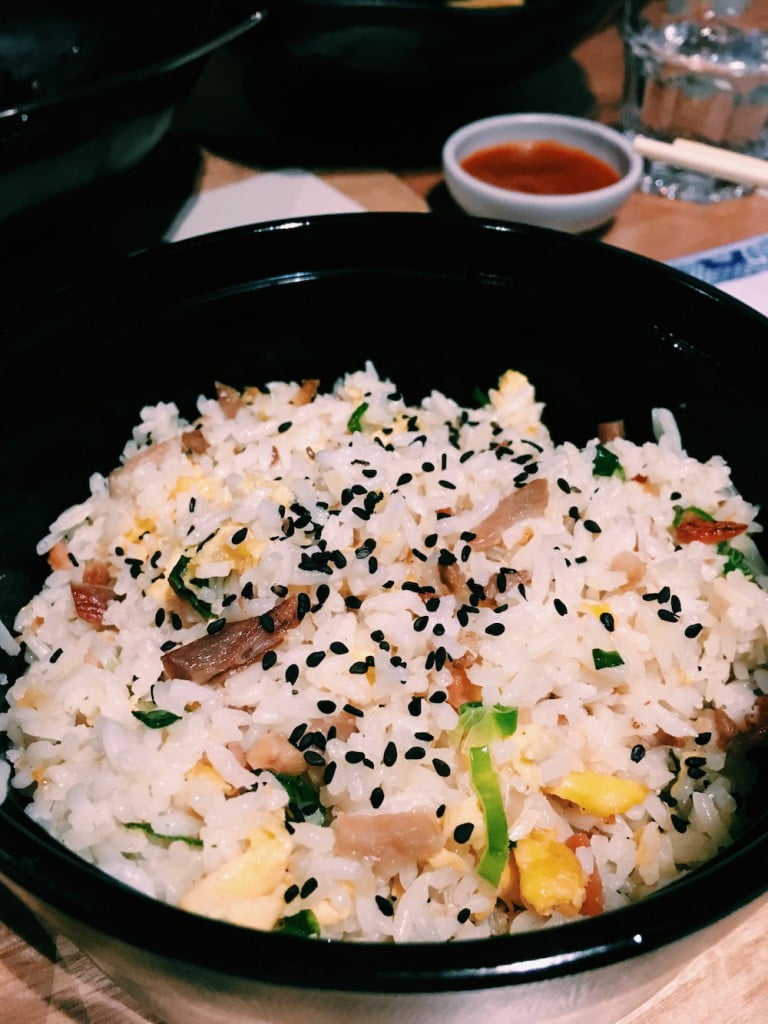 Another one of Oriental Teahouse’s perennially popular dishes is served, this time the special fried rice with lap cheong – the equivalent to a Chinese sausage – barbecue pork and chopped up slices of scrambled egg. It’s an excellent accompaniment to the saucier main dishes, with the flavours melding together well with the mild yet flavoursome rice.
With this feast quite literally under our belts,  it’s hard to stay upright at this point. However, there is still the matter of desserts. And there is always room for dessert!
We’re excited to have the chance to try David’s signature white chocolate dumplings. Liquefied white chocolate nestled in gelatinous steamed dumpling skin, topped with coconut and peanut praline is a taste sensation that every sweet-toothed food lover should experience. 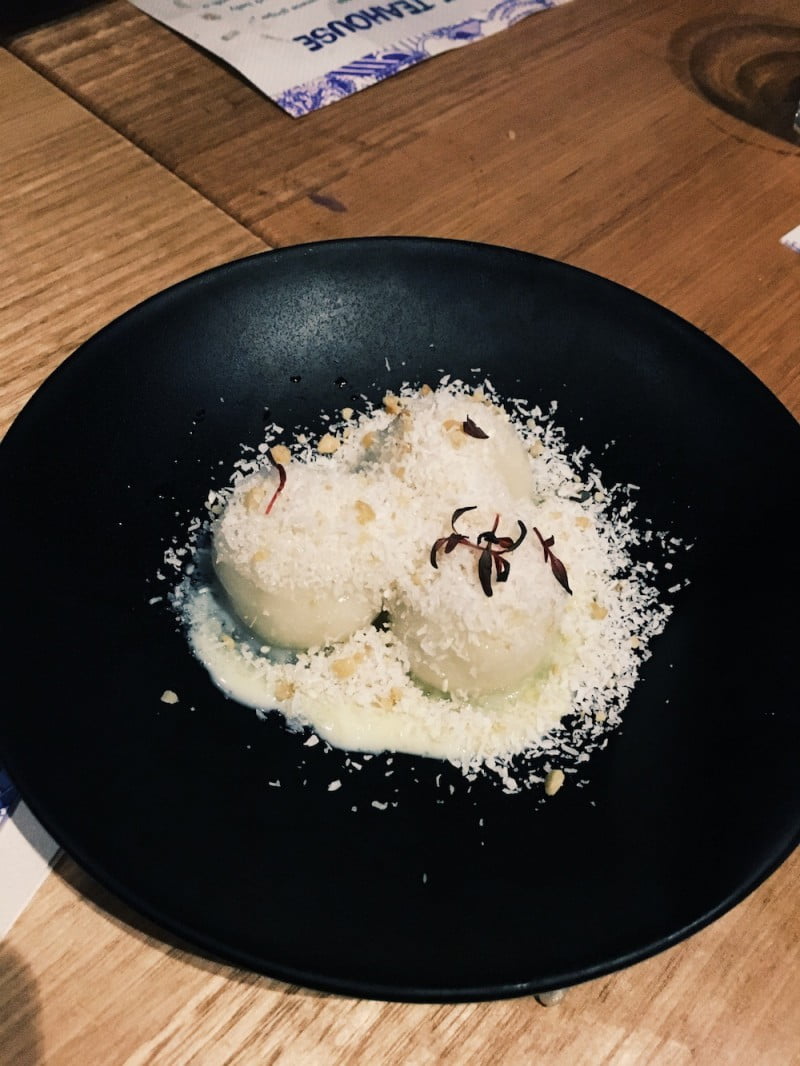 Not content with one dessert, we’re served a second sweet dish which is in keeping with the experimental theme – raindrop rosewater-infused jelly which you inject with fresh fruit tea syrup and dip in a roasted sesame bean powder. While it looks like something fresh out of a laboratory, the dessert is a fun and slightly macabre gimmick, with the unusual flavours a departure from any dessert I’ve ever had before. 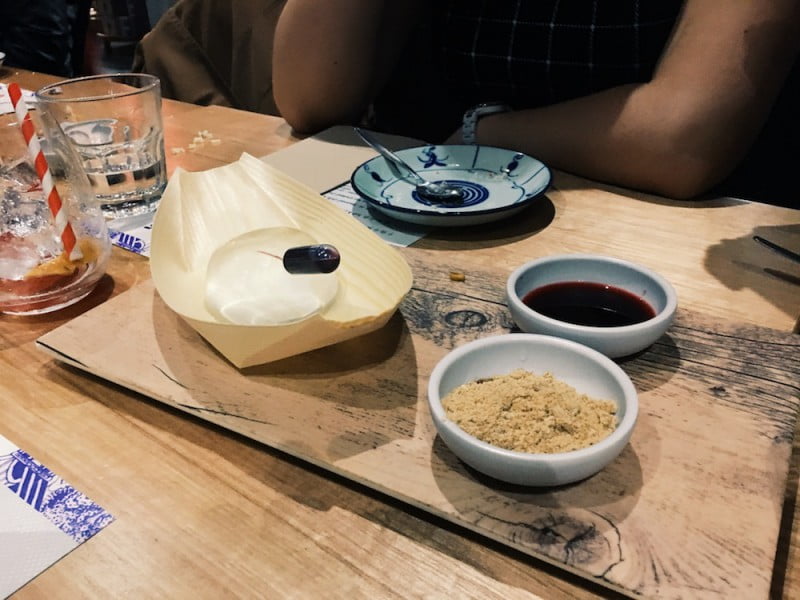 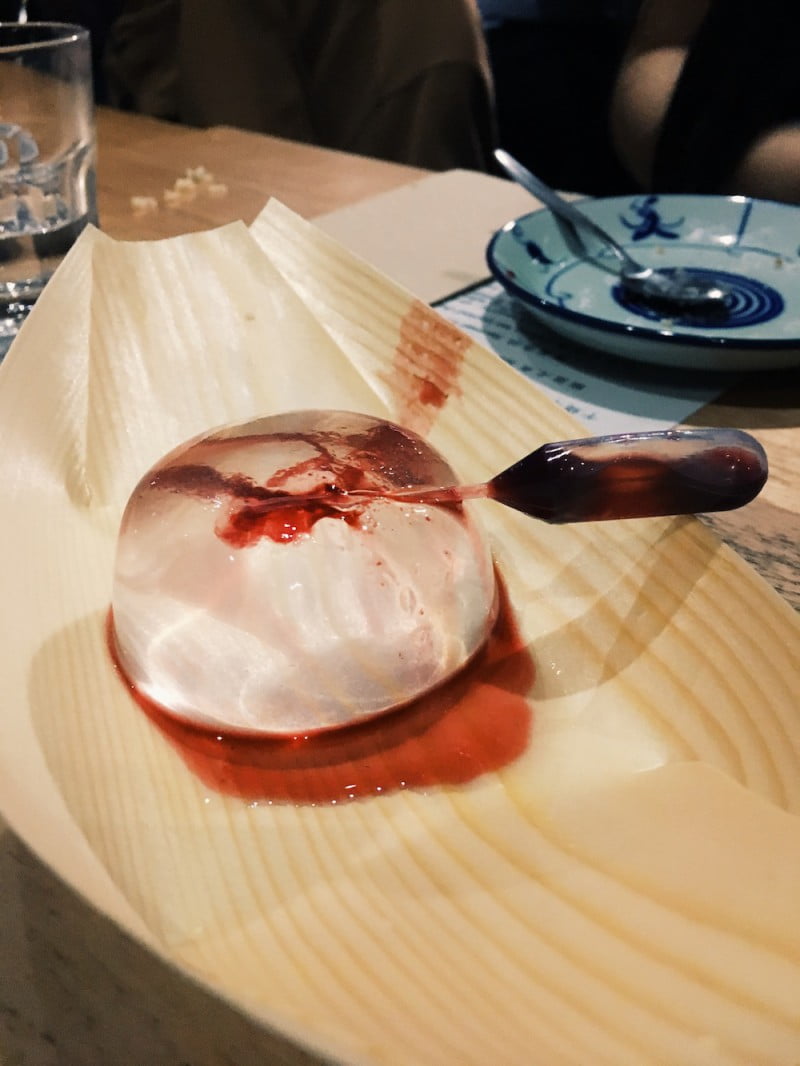 The drinks menu is as extensive as the food one. My recommendation is the lime leaf Caprioska which is vodka infused with brown sugar and lime that’s a light yet refreshing beverage, cutting through the heaviness of the dishes.
David is also a teamaster and his breadth of knowledge shapes the extensive tea menu that patrons are presented after finishing a meal at Oriental Teahouse. With each tea performing a different function, make sure to pick the brains of David and his well-informed waiters  who will be able to guide you in the best tea selection after your specific meal.
Oriental Teahouse remains as relevant today as it did when it first opened a decade ago and still proves to be a much-frequented restaurant on the Chapel Street thoroughfare.  With its dedication to crafting innovative new dishes from old classics it’s little wonder that its’s as big a hit with Australian diners today as it was 10 years ago.
Oriental Teahouse
455 Chapel Street, South Yarra
Monday-Thursday 10.30am-10pm
Friday-Saturday 10.30am-11pm
Sunday 10:30am-10pm
http://orientalteahouse.com.au