Everyone knows that a night out in Melbourne isn’t truly complete until you have a bowl of steaming Xiao Long Bao in front of you – and nobody in Melbourne crafts those delicious little soupy parcels of delight like HuTong Dumpling Bar.
Nestled in Market Lane, just off the China Town strip, HuTong Dumpling Bar has been serving up their legendary dumplings for almost a decade, and their popularity shows no sign of slowing with Melburnians clamouring to fill out the three story restaurant night after night. 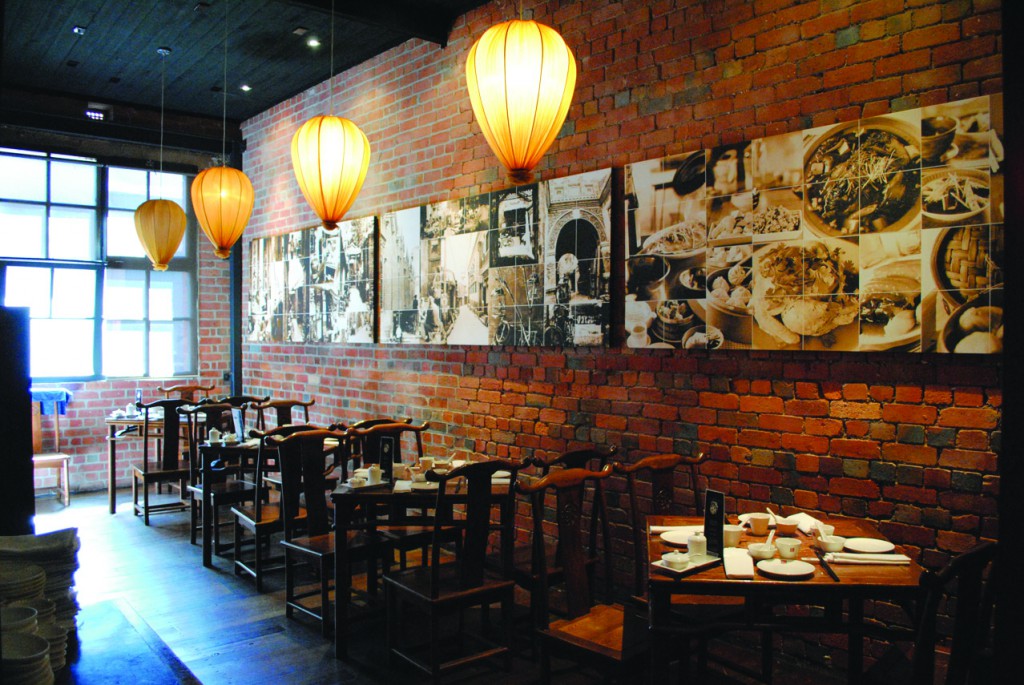 Melbourne’s love affair with Chinese food is almost as old as the city itself, with the first commercial Chinese restaurant popping up in Chinatown as early as 1863. By the 1920s, Chinatown’s bustling restaurants and cafes were favourites of Melbourne’s migrant and bohemian communities. The Dumpling Bar keeps this atmosphere alive by perfectly marrying traditional Chinese fare with fresh local ingredients, creating a menu that brings together the best of Shanghainese, Szechuan, and Cantonese cuisine. Even the name itself reflects both its Chinese origins and its current locale in one of Chinatown’s many serpentine laneways – ‘hutong’ is, after all, the Chinese word for a narrow alley or laneway.
It was with much delight, and a preemptively empty stomach, that I took part in a progressive dinner sampling the menu at three of the group’s restaurants.
We began our night of gourmandising at East Bar and Restaurant. Located on the ground floor at the Sheraton Hotel on Little Collins Street, East is HuTong’s sleek and modern cousin. With a stylish interior by renowned local designers Hecker Guthrie, the decor is fresh and contemporary, with subtle nods to Eastern culture creating a sense of calm. It naturally makes East the perfect place to wind down with after work drinks and nibbles. Speaking of the food, this is where East really stands out! I have two magical words for you: Chinese tapas. Combining Chinese fusion cuisine with the ease and share-ability of tapas, East’s head chef Gang Qian has created an exciting menu that has something for everyone. Formerly of the uber exclusive Radisson Blu Plaza Xing Guo Hotel in Shanghai, Qian has created dishes for presidents, royalty and celebrities.
We sampled the signature salt and pepper squid – which was absolutely heavenly – and my favourite, roti rolls with house made chilli chicken. As someone who starts sweating at the sight of chilli on a menu, I was a little apprehensive, but the sweetness of the roti and robustness of the pulled style chicken made this a dish that went down easy. Maybe too easy, as I had to take a step back and remember to pace myself for my next two dining stops! Finishing off with a refreshing Sour Apple Passion cocktail, my palate was sufficiently cleansed and ready for what lay ahead.
If that still hasn’t swayed you to try East’s awesome cuisine, can I interest you in a Peanut Butter Mudslide? Yes, that’s a thing, and once you’ve tried it, it will have you coming back to East again and again. 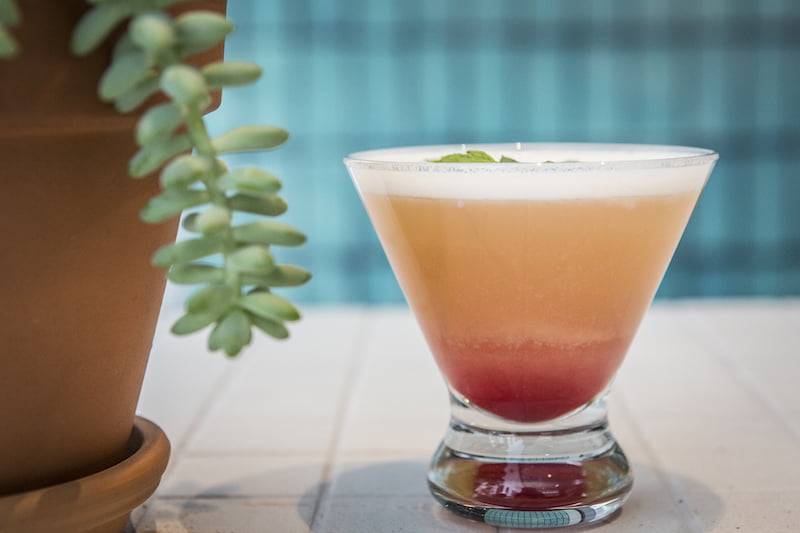 Our next stop was HuTong Dumpling Bar itself. Housed in one of Chinatown’s heritage buildings, and stretching over three sprawling floors, the restaurant really evokes the feel of vibrant and lively Chinese culture. With a lazy Susan full of the bar’s signature dumplings, I was in bao heaven. We started off with the vegetarian friendly spinach dumplings – which were a huge hit – before moving on to steamed duck dumplings, wontons with hot chilli sauce and, of course, the legendary Xiao Long Bao. As anyone who has had xiao long bao knows, devouring these little baubles of sometimes lava hot soup without sustaining third degree burns can be a tricky task, but HuTong’s chefs have perfected the art of creating delicious xiao long bao that are never scalding, so you can safely gorge on these shamefully in front of your nearest and dearest. Washing down our dumplings with Chinese tea and Tsingtao beer, we were ready for our next stop, and main event, Man Tong Kitchen. 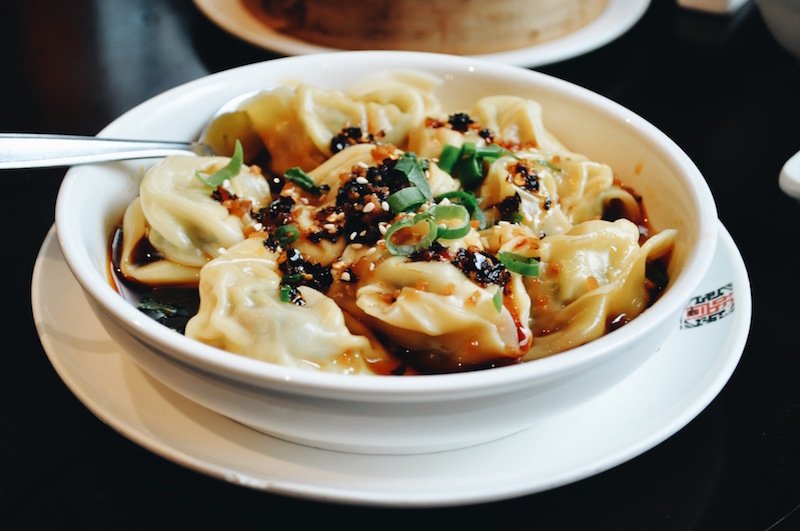 Despite being smack bang in the heart of the buzzing Crown Casino district, Man Tong Kitchen is a high-end, peaceful haven that feels a world away from the dizzying 24/7 bells and lights of the casino floor just downstairs. What I love most about Man Tong is how the menu features traditional Chinese dishes that are warming and familiar, as well as interesting and unique dishes from across the spectrum of Chinese cuisines. For me, the highlights were the deep fried prawns with salted egg yolk – a Cantonese dish – and the braised radish in a rich soy sauce, a dish that has Shanghainese origins and is a perfectly warming dish for when the Melbourne winter starts to bite. After my first two stops, I was getting towards full, but somehow I accessed my magical second tummy (we all have one, right? Especially for dessert) and I’m glad I did, because the prawns were enormous and dangerously moorish. The Szechuan style fish fillets in chilli oil was another standout, with plump basa fish fillets floating in a rich, spicy chilli oil broth that perfectly balanced sweet and umami flavours that had me going back for more.
Now, if wine is your schtick, Man Tong Kitchen is the place for you. I’m a bit of a babe in the woods when it comes to pairing wine with Chinese dishes, but Man Tong’s knowledgable staff have you covered, with a staggering fifteen page wine list available for your perusing – or, if you’re like me, for them to recommend from. And, if you’re feeling really fancy, the crowing glory of the epic wine list is a bottle of premier Chateau Lafite-Rothschild, retailing at a modest $10,000 per bottle. 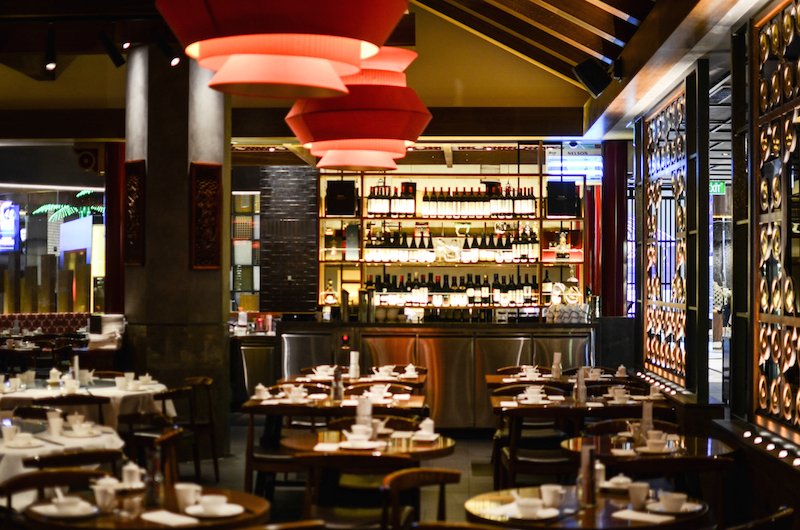 Although my epic three part dinner left me feeling very full and satisfied, I have to admit I’m already having Xiao Long Bao cravings. With cold autumn about to give way to an even colder Melbourne winter, I don’t imagine it will be too long before I’m nestled up in HuTong’s snug dining room with another lazy Susan spinning dumplings my way again.
South of the city for the evening? Don’t worry, you can get your dumpling fix at HuTong’s Prahran sister restaurant, HuTong Peking Duck and Dumpling Bar on Commercial Road.
East Bar & Restaurant
25 Lt. Collins St, Melbourne
Ph. (03) 9650 8838
www.eastrestaurant.com.au
HuTong Dumpling Bar
14-16 Market Ln, Melbourne
Ph. (03) 9650 8128
www.hutong.com.au
Man Tong Kitchen
8 Whiteman St, Southbank
Ph. (03) 9686 9888
www.mantongkitchen.com.au