‘Collaborations rock’ says acclaimed Australian artist David Bromley in reference to his new art-meets-wine project ‘Bromley by Wolf Blass’. He’s teamed up with the iconic South Australian wine producers, to launch an impressive art and wine experience located in his incredible Chapel Street home and studio. Here Bromley and his fashion designer wife Yuge Yu live in what is a striking Victorian era building. It was originally designed as hotel and shopping arcade, known as the Prahran Arcade. 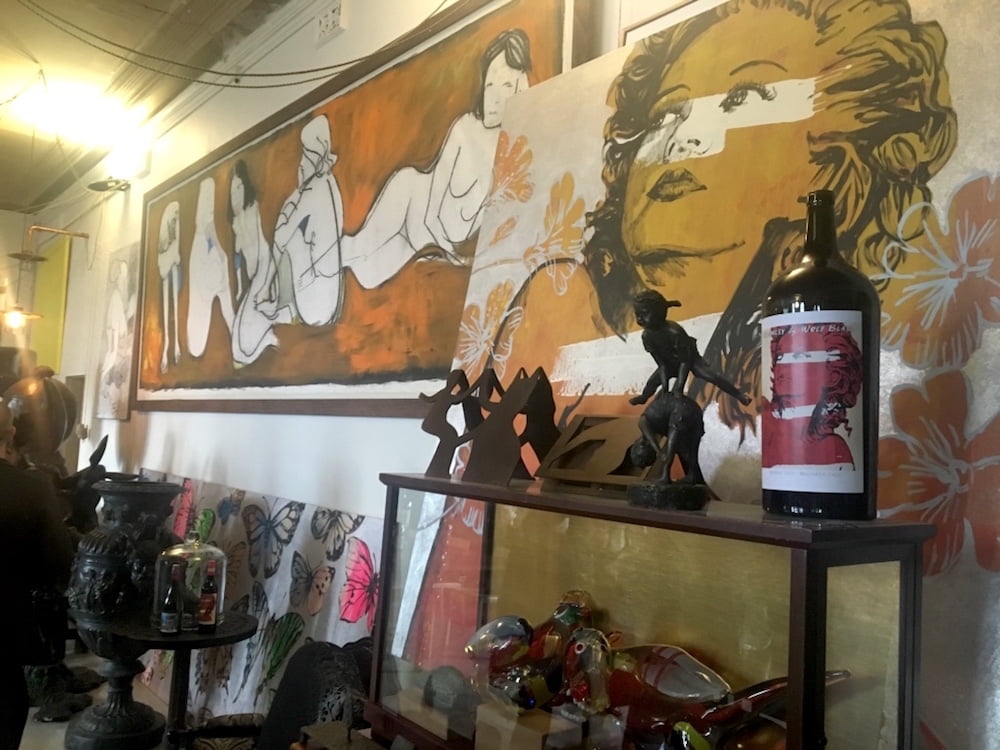 As you walk up the stairs you’ll notice the walls at either side are covered in beautiful, bold, colourful artworks; a theme which continues throughout the entire building. As we enter the ballroom we’re offered a drink, a generous glass of bubbles from the Bromley by Wolf Blass series. After all, this is half the reason we’re here. 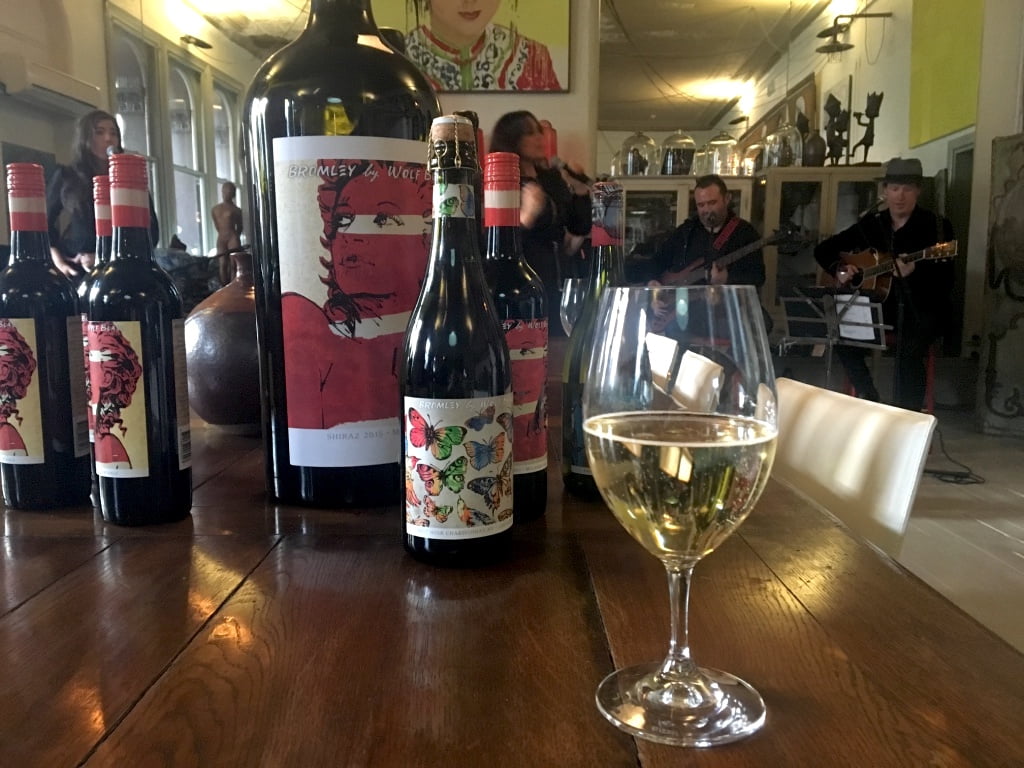 The non-vintage sparkling Chardonnay Pinot Noir shows off the best of South Australia’s talents with lively fruit flavours of lemon and stone fruits with a hint of warming spice. It’s a fitting drink to enjoy as the warm spring sun contemplates setting over Chapel Street.
While we work our way around the grand space, drinking amongst the artwork and décor, we’re serenaded by the silkiest sounds from singer Kate Cebrano and her band. Kate’s version of Fleetwood Mac’s Rhiannon is a personal highlight for me (being a die hard ‘Mac fan and Stevie Nicks fangirl. It’s a delight to hear making this easy drinking sparkling go down a treat.
Morsels of food are circled around the crowd as the waiters meander in and out of the balcony, between the artworks and around the long dining tables. From mini sausage rolls with tangy marmalade to cauliflower pastry triangles and smoked salmon sliders served in sesame black buns. 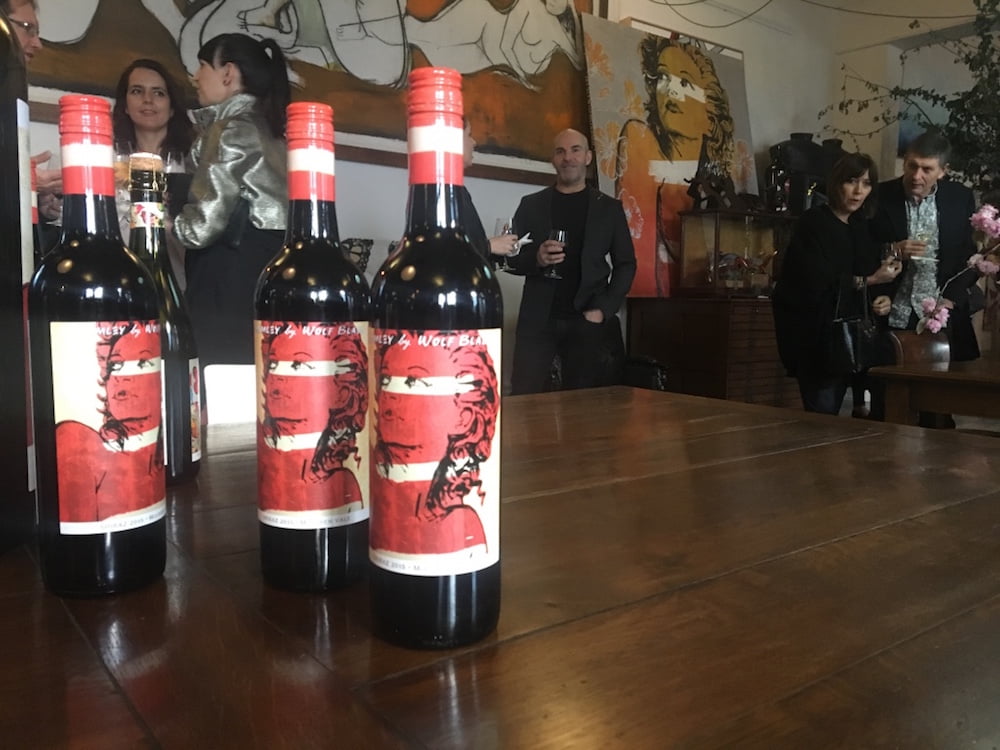 With the sun setting on the balcony outside, the focus shifts in the ballroom as Bromley is invited to talk about the collaboration with the head Wolf Blass wine maker. The collaboration includes his appointment as creative director at the Wolf Blass Melbourne Cup Carnival Marquee and his artwork will be featured on the Bromley by Wolf Blass wine series.
This seems like the perfect time to try the Shiraz, which has delicious dark fruit and liquorice aromas swirling around the glass. On the tongue we can taste dark berry flavours, hints of spice and and velvety tannins. There’s a lightness to the wine that we don’t usually get from a Shiraz and it’s a highly enjoyable drop! 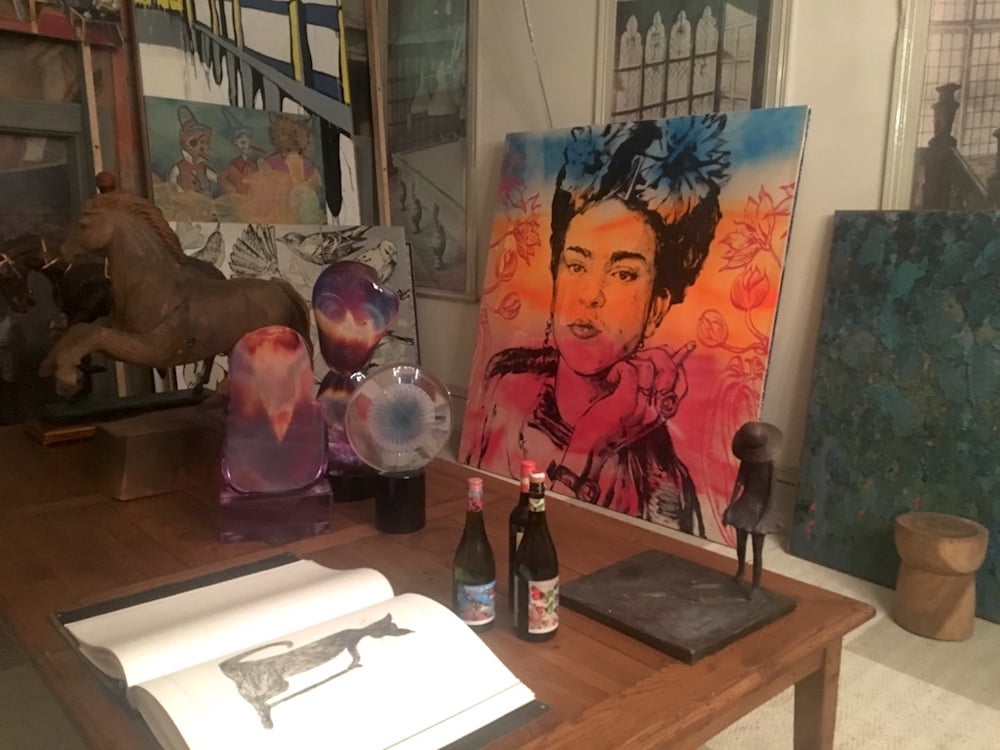 Bromley talks about the common themes in his work and his three loves: nudes, butterflies and birds, all of which can be seen around his studio and extended into the Wolf Blass Marquee. Those lucky enough to get an invite to  the marquee should look out for the portrait that David painted of ‘Wolfie’ Wolfgang Blass on his 80th birthday. That was when the seedlings of this collaboration were planted, resulting in a stunning creative project.
The Bromley by Wolf Blass series is available to buy at various outlets. But if you get the chance, pick up a bottle from Dan Murphys on Chapel Street which has returned to it’s original space in the Prahran Arcade under David Bromley’s home, the same building where the collaboration came to life.