Lamb doesn’t discriminate, and neither do we!

The Meat and Livestock Corporation (MLC) have just released their latest spring lamb campaign, ‘Never Lamb Alone’. It comes as a witty jab at the Australian media, highlighting how the white, middle class voice is favoured both on and off the screen. This 90 second ad comes as a welcomed celebration of Australia’s inherently multicultural, ethnically diverse landscape.

MLC’s marketing director Andrew Howie explains how they analysed 2011 Census data to gain an insight into the social fabric of Australia’s key ethnic groups. Focusing on diverse areas, the ad highlights multiplicity in language, sexuality, culture and physical ability. A link is continually made back to lamb as the ‘protein that doesn’t discriminate’.

Set on a grassy coastline, the ad opens with Luke Jacobz, a well known white male presenter. Jacobz is quick to remark that there are “too many perky white males contributing to a lack of diversity on our screens”.

Jacobz is soon replaced by Indian-Australian actor Arka Das. Gold medal Olympian Cathy Freeman and sports icon Greg Inglis are first to enter the limelight. Eager cricketers play in the background as the lens then travels across the sunny setting. We see a gay couple nursing their newborn baby. A deaf woman uses sign language with Das, asking “where’s the tomato sauce?”. In the most aussie way known how, Das replies in sign, telling her to “check the esky mate”. 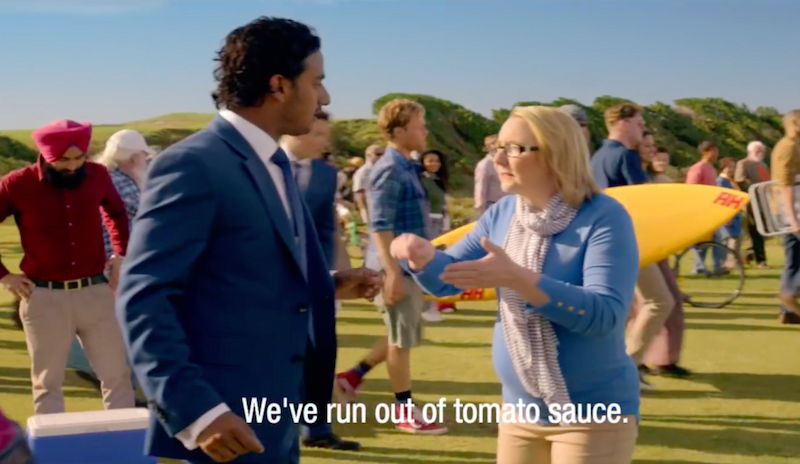 Transgender comedian Jordan Raskopoulos also features, insisting that she is Greek, “and proud!”.  A Jehovah Witness asks the presenter if “he’d like to talk about Jesus?”. Das responds by saying “hey” to a Spanish man sharing the same name. In the background, you’ll hear Australia’s best known bush ballad, Waltzing Matilda, playing loudly.

Das remarks “People of colour, I mean, who isn’t?”. This is a rhetoric MLC insists that contemporary Australia needs to come to terms with.

Keep your eyes peeled for the reference to white colonisation in the closing scene. Surrounding a big BBQ, the crowd collectively carry their empty plates with eager appetites. When Das asks “who was here first?”, Freeman and Inglis promptly reply, “Ah, that would be us.”

Howie states that although the ad is lighthearted, it also carries a serious message. We are drawn to the irony that in 2016, in a country as diverse as ours, we are made to chat about discrimination and it’s ramifications. Spring has certainly sprung, so why not grab some makes and tuck into the ‘meat that doesn’t discriminate’.