From olympic runner to lover of wine and gin, Cameron Mackenzie with Stu McGregor has created Four Pillars gin. With an incredible story about how Four Pillars was created we recently caught up with Cam to discuss his inspirations behind Four Pillars, what’s in store for gin this year, his ‘baby’ Wilma and of course the Olympics. 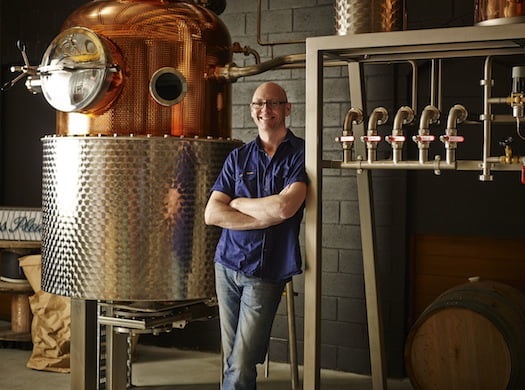 1. What inspired the dream of Four Pillars gin?

It was a combination of things really – both Stu Gregor and I’ve always been gin drinkers and we’re looking for a new project after several years in the wine industry.  But interestingly our gin quest actually started with a desire to make tonic water.  We’re having a few G&T’s at a bar and were horrified to see tonic from a post mix gun being mixed with a really great gin.  This was the catalyst for making tonic that rapidly moved to gin.  It made sense and the more we looked into it the more obsessed we became. Through our obsession, we discovered the amazing craft distilling scenes that had been emerging over the last few years in the UK and US.  We also learnt that more than 90% of gin consumed in Australia was imported, we wanted to help change that.

2. You work with both gin and wine; apart from the obvious flavour how is the production process different?

They processes are quite different and both have their challenges.  With wine you’re at the mercy of Mother Nature and you have a very narrow window to get each vintage right.  With wine, you deal with juice and yeast throughout fermentation and then maturation in oak.  The turnaround time is often 12 months or more.

Gin is a very different story.  Our beautiful still (Wilma) is like a large kettle.  We fill the pot with grain spirit and botanicals, which are effectively boiled.  The vapours collect the botanical characters as they move through the still.  The distillate is so clean because it’s a high-proof spirit (we distil to 94% alc).  Another big difference is that we’re dealing with hot ethanol, which is very dangerous – it’s not something you deal with in the wine because temperatures are generally quite controlled and cool.

3. You ran the 4x400meters in the Olympics, what was harder; the Olympics or creating Four Pillars?

Truthfully I never really expected to do either!

I was fortunate to make the team for the Atlanta Olympics.  I was a 100m/200m runner and only ran my first 400m when I was 25 then a year later I was at the Olympics. The training was bloody torture and I watched everything I ate (and drank!).

As fate would have it Stu and I were working in wine together in the lead up to the Sydney Olympics.  I missed the team by one place and he’s felt guilty ever since!  He led me astray!

We’ve put in some very long hours to get the distillery up and running but a significant part of that has been tasting gin!  Not the hardest thing I’ve ever had to do.

4. The Still is named after your late mother; is there a story behind this?

Our still is named Wilma after my mum who passed away some years ago.  Obviously I thought it was a fitting tribute because the still is so beautiful and so was mum.  Add to that my mum raised five sons and could get a little hot under the collar at times…just like Wilma.

5. What has been the most challenging aspect creating Four Pillars?

I’d say it was coming up with the final blend of botanicals.  We did test distillations of about 80 botanicals from all over the place.  Some were amazing and others very underwhelming.

Our idea was to make a Modern Australian Gin.  Over time we narrowed the selection down to the spices of south east Asia through to the middle east, some beautiful European juniper and a couple of cracking Australian botanicals (lemon Myrtle and Tasmanian Pepperberry leaf).  Our final twist was to use fresh biodynamic oranges in the botanical basket – we steam these in gin for about six hours.  It gives a lovely Mediterranean character to the final gin. That, to us, is a Modern Australian Gin.

6. Gin has started to become really popular in Australia, what do you think has brought on this trend?

I put it down to a combination of things.  We’re seeing the emergence of some brilliant small bars and with that comes a vibrant cocktail scene.  Bartenders and mixologists are adding theatre to drinks and consumers are loving it.  Gin is such a crucial ingredient in so many cocktails.

Gin is also such and interesting drink!  There are so many different styles and you can do so much with it.

We have a couple of gins that we’re playing with.  The one we’re most excited by at present is our barrel-aged gin.  This is a style of gin often called an Old Tom.  I’m not sure when it will be ready but it’s looking really good.  The gin has picked up some colour and the spices are integrating with the beautiful French oak barrels.  Watch this space!

8. Where do you love to EAT in Melbourne?

I’m a real dumpling fiend. Hutong could be considered a bigger vice than gin.

9. Your favorite place to grab a DRINK in Melbourne?

The Gin Palace has never failed me but I also love Black Pearl and Eau de Vie.

10. When you’re not working, where do you go to PLAY in Melbourne?

I have three young daughters who occasionally let me get to the G for a Saints game. I love the MCG – there is no better stadium in the world.