40 taps. 300 seats. All of the Buffalo wings. Meet the beer-centric social emporium launching in Barangaroo this weekend.

Barangaroo’s waterfront dining scene is showing no signs of slowing down. From Nola Smokehouse and Bar to Barangaroo House’s iconic three-level dining destination, punters have no shortage of options in this part of the city. But another player is about to swing open its doors just in time for the long weekend.

Introducing Beerhaüs Barangaroo, the amped-up beer-focused destination complete with 600-square meters and 300-seats of fun. It’s a venue that is set to command attention, complete with a spectacular wrap-around outdoor seating area designed to accommodate 100 guests, perfect for post-work drinks or an afternoon of alfresco beers and snacks. 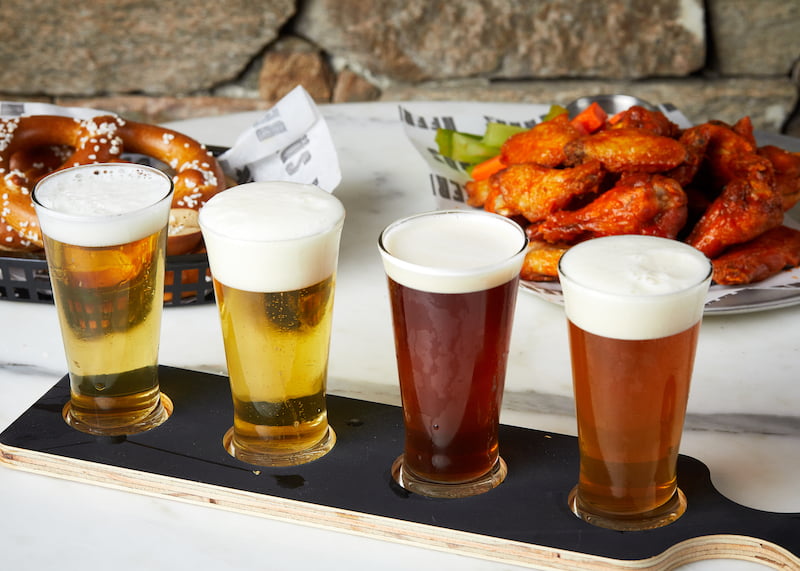 Local brewing legends Pirate Life are headlining the line-up, partnering with the venue to bring this tap room to the Barangaroo site. They’ll be 12 Pirate Life beers on offer (including limited edition brews crafted exclusively for Beerhaüs). Expect special released like Pirate Life’s Acai and Passionfruit Sour, Burton Co-Lab Frontside Ale and the new Barangaroo Desert Lime Ale. Plus the venue will be showcasing other local brewers including 4 Pine Brewing Company, along with the classic Aussie favourites Victoria Bitter and Melbourne Bitter.

The venue doesn’t disappoint when it comes to entertainment either. There’s everything from games like ping pon, pinball and giant Jenga to live sports screenings. Gentleman, swing by Saturdays between 1-3pm to take advantage of their weekly free barber sessions too.

Once you’ve worked up an appetite, Beerhaüs have you covered with a mix of Amerian-style and classic Bavarian eats. Dig into slow-cooked, peach wood-smoked BBQ meats such as beef brisket, pulled pork and half chicken. In turn Americana fashion, you can nab a bucket of Buffalo wings (in servings of 10 to 100 pieces) with your choice of six dips, including blue cheese, haus sauce and chipotle mayo.

Burger lovers, rejoice. These guys have a stellar line up including their ChookHaüs (packed with secret-spiced chicken, Texas BBQ sauce and all the toppings) and a MooHaüs Angus beef burger. Fancy something with a stronger Bavarian touch? Get your hands of pretzels, crackling pork belly and their signature American-Bavarian loaded schnitzel ‘The Texan’ (topped with fries, chili con carne, cheese and onion jus).

Looking for a deal? Beerhaüs’s $5 happy hour (4-6pm daily) comes complete with free Royal Snacks. Plus, take advantage of their selection of all-day deals including 10-cent chicken wings on Mondays, two-for-one schnitzes on Tuesdays and $35 All You Can Eat Meat platters on Wednesdays. Because who doesn’t love a bargain?

Beerhaüs Barangaroo is opening its doors this Friday, October 4th at 12pm. Find the venue on Scotch Row, Harrington Street in Barangaroo South, open 11-late daily. To find out more and book a table, click here.