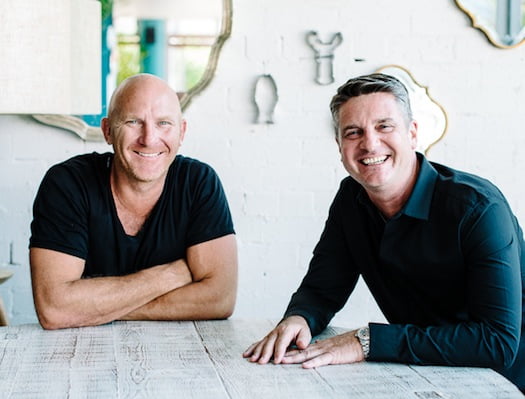 Celebrity chef Matt Moran teamed up with Peter Sullivan way back in 1998, and together they have been taking the foodie world by storm ever since. With a newly opened restaurant in North Bondi, we had a chat with the pair about their partnership and what to expect from their new eatery, North Bondi Fish.
1.  Matt, what inspired you to become a chef?
I grew up on our family farm and so had an appreciation for good food at a young age but it wasn’t until I left school when I was 15 and secured a chef’s apprenticeship at La Belle Helene in Sydney’s Roseville that I realised I had a real passion for cooking. Best decision I ever made.
2.  Peter, what made you want get into the restaurant industry?
It’s been a passion of mine for as long as I can remember. I always loved eating out and knew that one day I would own a restaurant.
3. Peter, you and Matt have been partners since 1991, how did the partnership form?
We were both working at La Belle Helene, Matt in the kitchen and I was running the floor. We both wanted to do something for ourselves and had a great amount of respect for one another so it wasn’t long before we hatched a plan to buy The Paddington Inn Bistro in 1991. Since then, we’ve opened, among others, ARIA in Sydney and Brisbane, ARIA Catering and CHISWICK in 2012 and now North Bondi Fish.
4. Matt and Peter – what’s your best childhood foodie memory?
Matt – growing up on a farm taught me the value of good produce from an early age but when it came to cooking, the food we ate was quite simple. My first real foodie memories were from the kitchen during my apprenticeship.
Peter – when I was 13 I went to a restaurant with my family and for me it was love at first site. It wasn’t just the food that captured my attention; it was the whole experience from start to finish.
5. Matt, tell us what has been your greatest achievement to date?
I am really proud of what we have achieved since opening ARIA Sydney, to now have four restaurants in iconic locations in Sydney and Brisbane has to be it for me.
6.  What can viewers expect from your new TV series, Paddock to Plate, Matt?
It’s a beautiful show that brings together an amazing knowledge of products and ingredients, all with a cooking class at the same time. It’s honest and unscripted so what you see is who I am and what I love.
7.  Peter, can you let our EAT, DRINK, PLAY readers in on the new venue you and Matt just opened yesterday in North Bondi?
North Bondi Fish is relaxed, it’s fun and it’s no fuss. It is the kind of place you head to for something good to eat anytime of the day, even while still in your thongs and boardies.
The menu features fresh, simple, seafood dishes using the best quality produce. There’s a selection of small bites, summer salads and simple fish dishes, charcoal-grilled on the kitchen’s Inka Grill. Some of our favourites include yellowfin tuna ceviche; sweet potato scallops; prawn roll; grilled snapper with asparagus, pea shoots and avocado; and our own take on fish fingers.
8.  Where do you both love to EAT in Sydney?
Pete – I love Fratelli Paradiso, they serve great, simple, fresh food and it’s always consistent with a great atmosphere and good service.
Matt – It’s hard to say because I am always trying new restaurants but some firm favourites are Apollo for a quick bite, The Three Blue Ducks for breakfast and I think North Bondi Fish will be like a second home over the coming months!
9.  Where do you guys grab a DRINK in Sydney?
Pete – My favourite place to drink has to be Monopole, the wine list is one of the best I have seen, the space is comfortable and the food is always great.
Matt – Opera Bar is a great spot for drinks and it’s close to the office.
10.  Ultimate spot you guys like to PLAY in Sydney?
Pete – It has to be the beach.
Matt –  At home, with the family.