Newmarket Hotel isn’t new to the bevvy of Melbourne’s culinary establishments – having burst onto the dining scene in 2011 – but it remains a much frequented eating and drinking destination for the well-heeled Southsiders who reside nearby.
Combining elaborate Moorish archways and light-filled expanses with a temperature-controlled space that ensures you’re insulated from the harshest of Melbourne’s weather, Newmarket Hotel matches its sophisticated interior with an extensive menu that draws on Californian and Latin American influences. Expect to find quesadillas and tacos sitting alongside wood-fired roast meats and fresh salads.
Surrendering the decision on what I should eat to the chef, I opted for the four-course ‘SoCal’ menu, where you can choose between a four-course spread for $49 or five-courses for $64 if you visit Newmarket Hotel Monday to Thursday. The prices are slightly steeper on weekends, at $59 for the four-course and $74 for five from Friday to Sunday. With a happy hour running from 4 to 7pm, I also treated myself to two $10 margaritas.
What I would do differently next time is refrain from gorging myself on the appetiser of crispy corn chips with guacamole, which were moreish and incredibly tasty, but took up some precious stomach space before the generous spread arrived. 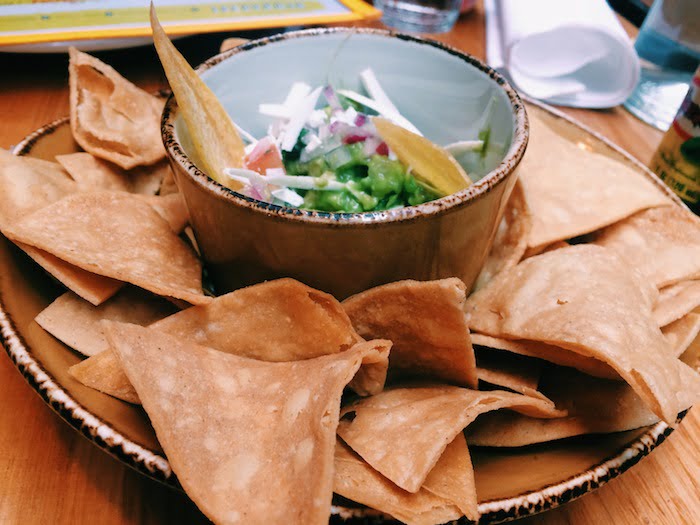 First up was a selection of three oysters – the market oyster with toasted pepper and shallot vinegar; the black Russian gazpacho oyster with crisp coriander, cumin oil and salsa fresca; and the buttermilk battered oyster with warm sofrito and jalapeno – and a scallop ceviche. The black Russian gazpacho oyster was a particular highlight, with the freshness of the produce complemented perfectly by the acidity of the salsa fresca and lime. 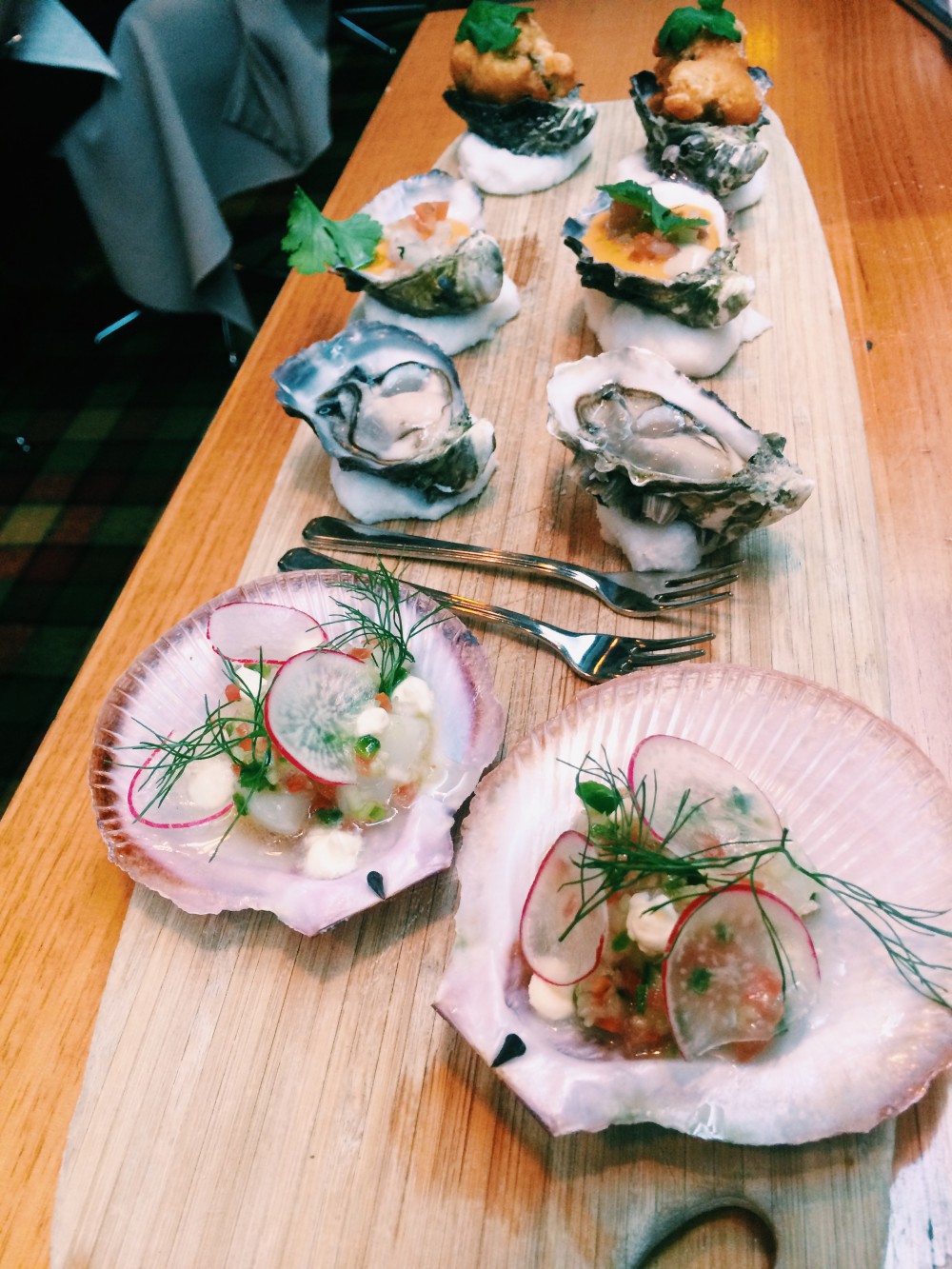 The second course saw us get a generous serving of three tacos – one smoked mushroom, a cured pork and brisket taco, and one with crispy John Dory – and a sneaky piece of spiced chicken wings. The chicken wing that I sampled was tender and flavoursome with a wonderful umami aftertaste.
The tacos were heaped to the brim with an assortment of ingredients, some complementing each other better than others. I looked up ‘huitlacoche’, which was an ingredient in the smoked mushroom taco. I discovered that it is a black corn fungus – which sounds a lot less appetising than how amazing it tasted when coupled with the refreshing celeriac slaw and the hickory notes of the mushroom. It was by far the best taco I’ve had in a long time, and would prove to the most ardent carnivores that vegetables can be every bit as inventive as meat dishes. 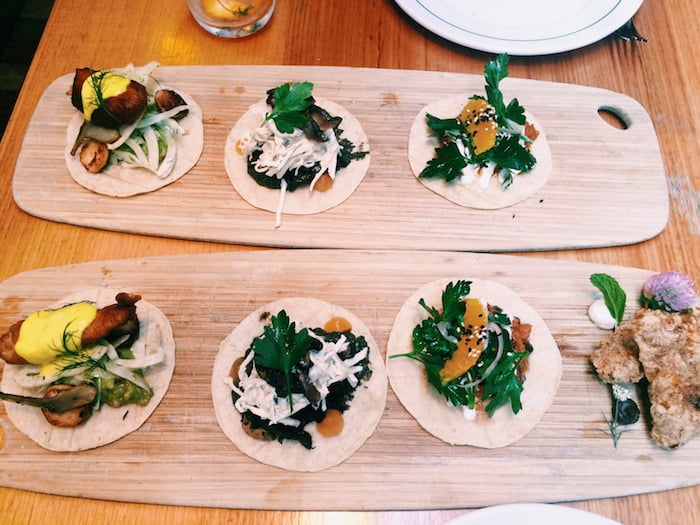 By this stage, my belt was straining against my dress, which prompted me to worriedly query the size of the next course. Our attentive waiter reassured me that the chef would make the serving slightly smaller than usual, which I greatly appreciated.
Next up was spiced lamb shoulder with a sweet Pedro Ximenez sauce and caramelised cauliflower as well as spring greens with quinoa, smoked almonds and almond coulis. After the richness of the preceding dishes, the spring green salad was a much welcomed addition to the meal, and it was one of the tastiest dishes of the night and the perfect counterpoint to the tender lamb and the saccharine accompanying sauce. 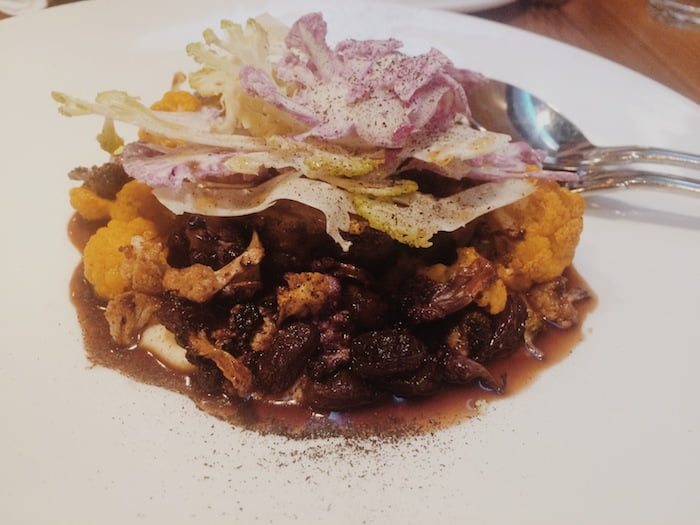 It’s sacrilegious to not be a dessert person, but I’d rather savoury over sweet any time of the day, which makes this statement all the more remarkable: the bitter chocolate, salted caramel and frozen nougat cazuela was the best dish of the night, and all the waiters’ top dessert pick. Best shared between two people, especially after partaking in the SoCal spread, the velvety richness of the chocolate was offset by a generous scoop of ice cream drizzled with a salted caramel glaze. 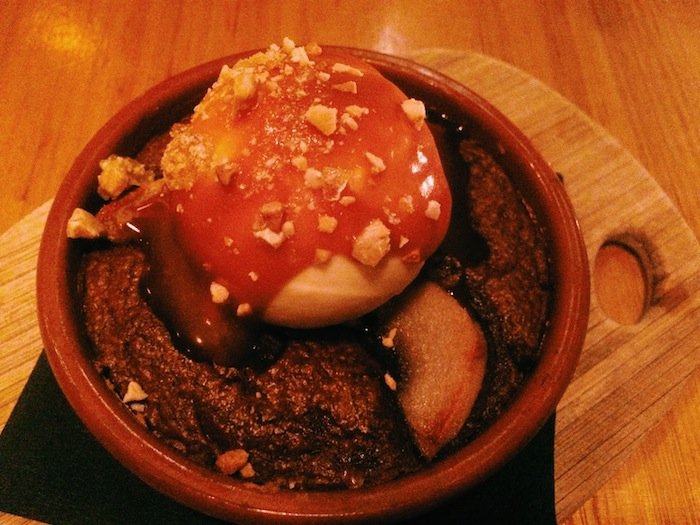 What I loved about the SoCal menu was that there was plenty of time allowed for the slow enjoyment of the courses, with a healthy 15 to 20 minutes allowed between each course.
And despite eventually exiting the restaurant clutching our engorged tummies at close to 10 on a rainy Tuesday night, Newmarket Hotel was heaving – people continued to stream through,  joining the crowds that peppered the space.
What was perhaps most impressive about Newmarket is that it never felt like I was in a raucous nightclub – superior acoustics ensured that the loud din of the merry drinkers out the front never interfered with the more quiet experience of dining in the formal rear dining hall. There was something for everyone.
Newmarket Hotel
34 Inkerman Street, St Kilda
Monday-Wednesday 12pm-12am
Thursday-Saturday 12pm-1am
Sunday 12pm-11pm
http://newmarketstkilda.com.au/