What To Order at Mjolner- The New Viking Bar in Redfern

If Thor lived in Sydney chances are you’d find him eating and drinking at Mjolner.

There’s been much hype about the Mjolner, the new viking bar in Redfern. Months before the doors even opened it seemed to have received more media coverage than most restaurant’s get in an entirety of their existence. Why the hype? It’s the first restaurant venture from Sven Almenning, owner of award winning bar group The Speakeasy Group (Eau De Vie Sydney and Melbourne, The Roosevelt and Boilermaker House). Last year Almenning was listed as the fourth most influential hospitality person in Australia by Bartender Magazine so it’s safe to say he knows a thing or two about bars and cocktails. But does he know how to run a restaurant?
We recently caught up with Almenning to hear (and taste) the new menu at Mjolner and hear his vision for the new venture. He explained that he was looking for a new venue and discovered this underground space on Cleveland Street on the border of Surry Hills and Redfern. It took him a while to think of the right theme but he knew he needed to open a restaurant. “No new bar licenses are being granted in Sydney right now” explained Sven. Unless you’re taking over an existing bar license it’s almost impossible to get a new one. 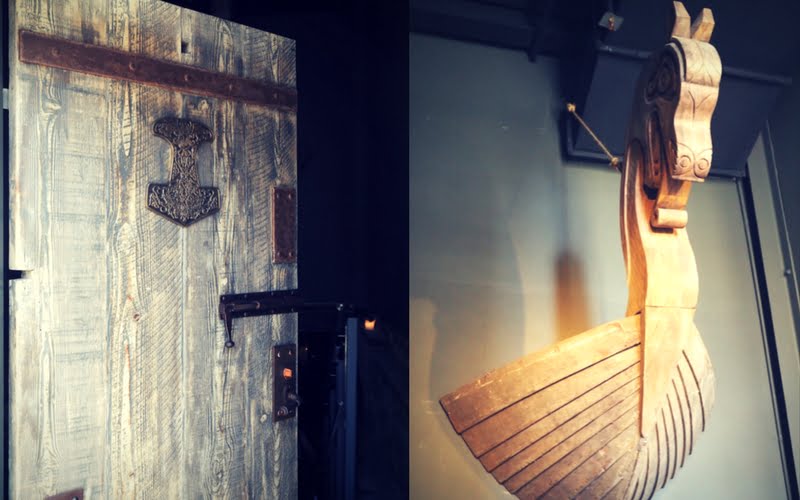 Drawing on his Scandinavian heritage and some bedtime comic book reading to his twin sons at night Sven started playing with the idea of the legend of Thor and asking the question; “If Thor was down here on earth today where would he want to eat and drink?” It’s a fun question that’s lead to months of planning and renovations to transform the heritage listed site into a modern day viking bar and restaurant. 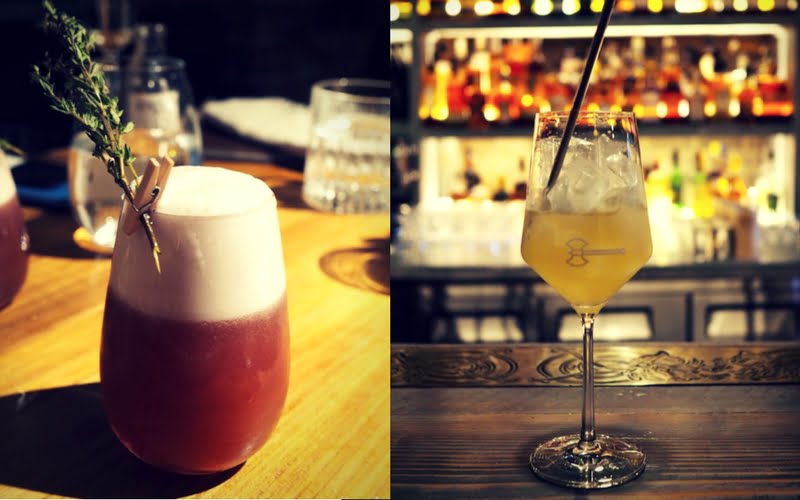 But first you’ll need to find it! Just look for the unassuming heavy wooden door on Cleveland Street with a pressed metal hammer sign on the front. I’ve walked straight past it on the two occasions I’ve been here so keep a beady eye. Push the door open and look up, you’ll see part of a viking boat sticking out of the wall. Let your eyes adjust and make your way to the front of the venue where a warmly lit bar holds over 400 different types of whisky. You’ll notice the staff are all dressed in theme with modern day, minimalistic viking outfits and braids. It’s small attention to detail like this that brings the theme to life. 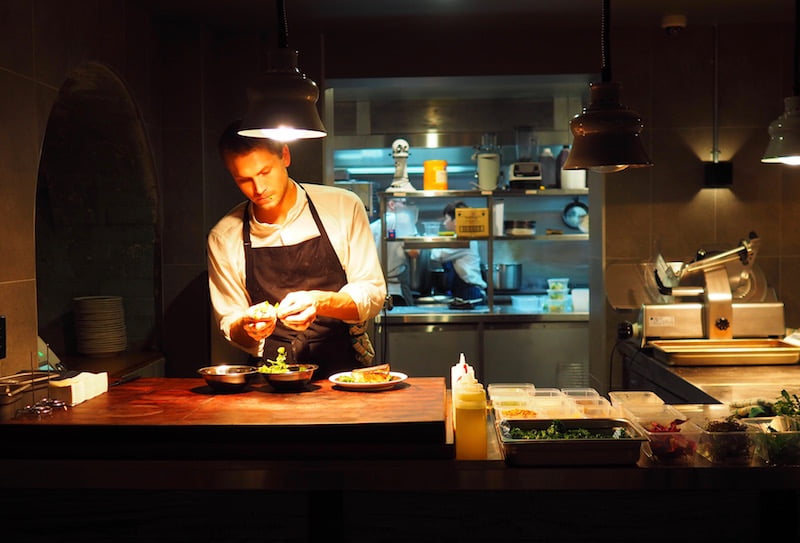 Pop in for a drink at the bar or make a booking in the main restaurant. There are several sections to the venue with private dining spaces available for larger bookings, one with it’s own private bar. If you’re starting with a cocktail and whisky isn’t your poison try the Shrubbery made with Beefeater gin, house elderberry liqueur, lemon, egg white and carbonated rose. Or their signature Northern Lights cocktail made with Plymoth gin, iced riesling, elderflower and sorrel. For something theatrical try the King’s Fizz which comes in a little labelled bottle for you to pour yourself. 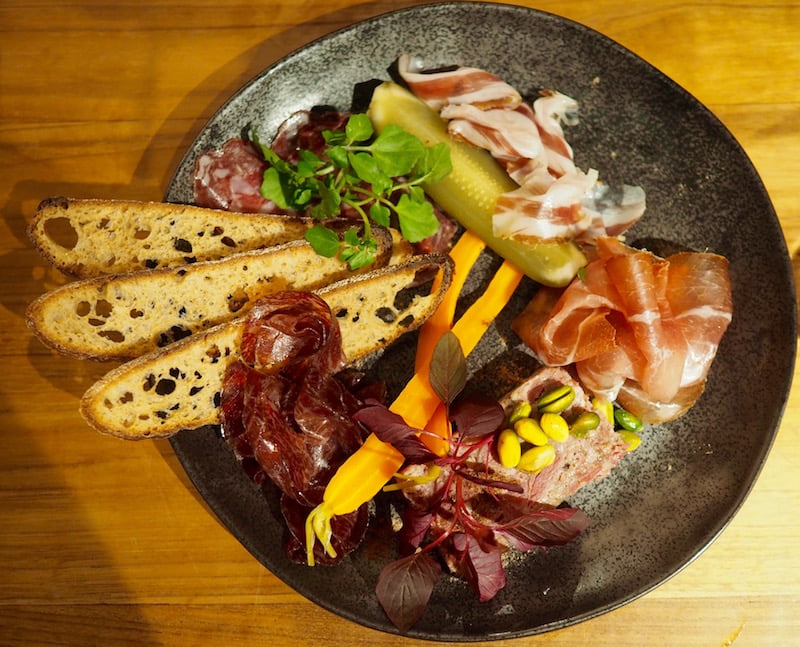 Your eyes will dart around the room noticing small details including the swords and viking helmets held in cages built into the walls. There are custom carved tables, hanging meats in a glass cabinet and a horn on each table (which you can drink from). Even the cutlery is “Scandi as fuck” according to Sven. But eventually your eyes will be drawn to the open kitchen and carvery where Head Chef Tom Gripton (The Roosevelt, Monopole and Apollo) can be found preparing the daily beast special. 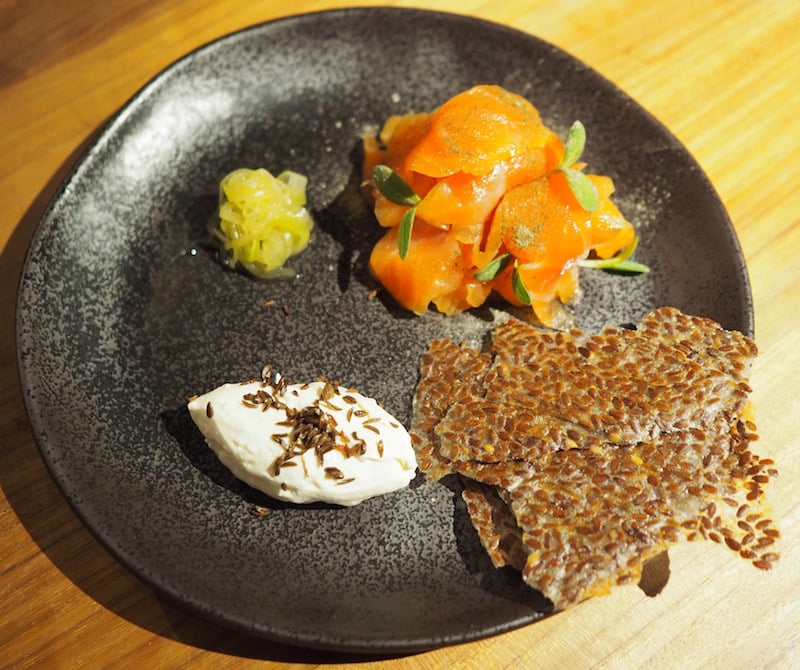 The menu has a number of smaller share style dishes including salmon gravalax, assorted charcuterie and pigs head terrine which is good for grazing. Whilst the restaurant itself is very themed the food at Mjolner is quite understated. Sven explains he didn’t want to take the theme too far so you feel like you’re in a theatre restaurant. That being said you’ll find a delicious roasted bone marrow sprinkled with meat powder and pickled herbs on the menu. While Sven admits it’s not really a Norwegian dish “would Vikings eat bone marrow today? Fucking Yes”. 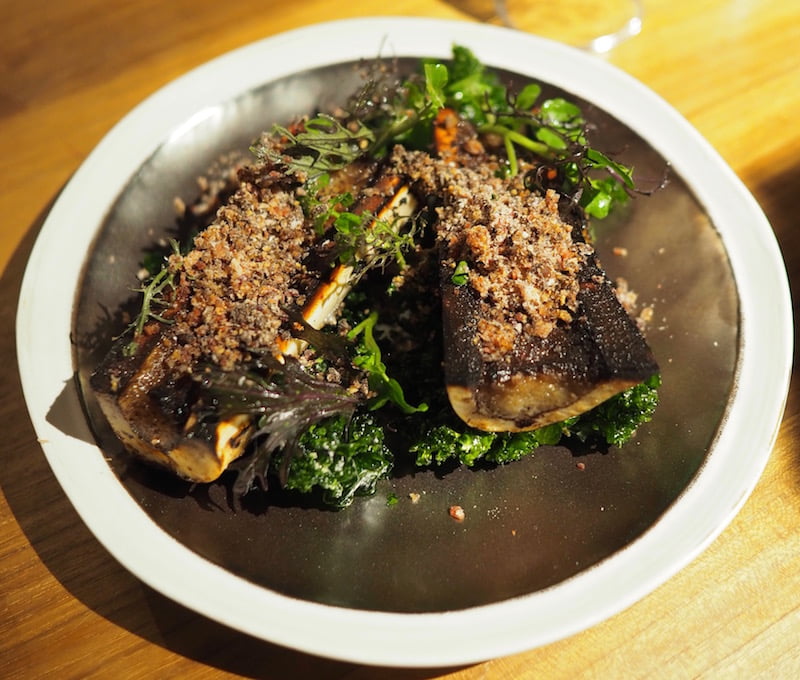 The main menu is divided into bird, beast, fish and veg. Each day of the week features a different combination of those four elements. We’re told eventually they’ll start doing the same combination on each day of the week. For instance, Tuesday may be duck day and if you love duck you’ll want to book in to Mjolner on Tuesdays to satisfy that craving. 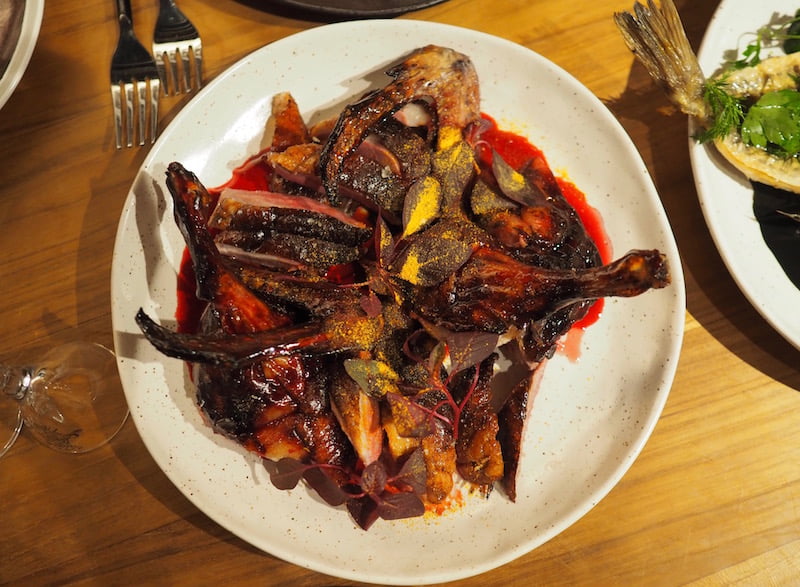 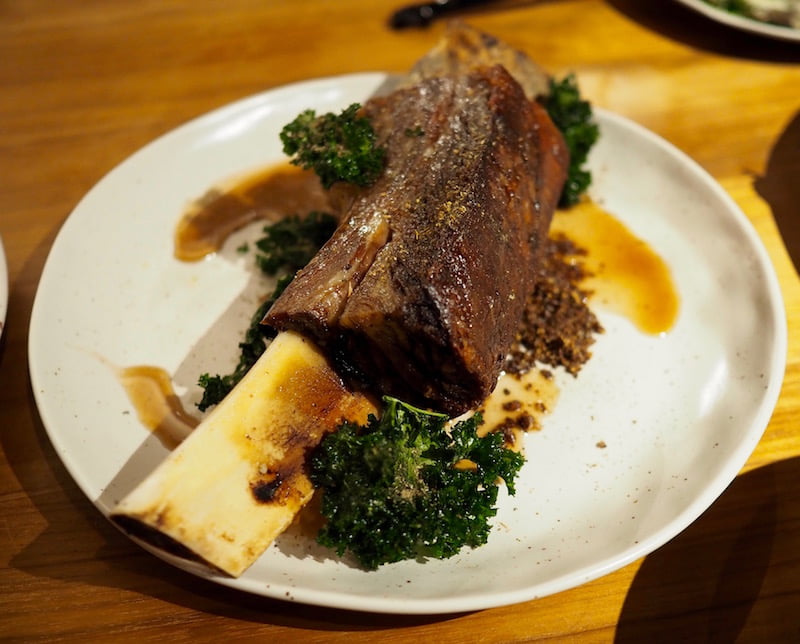 As it turns out Friday may in fact be duck day because that’s what Tom is dismembering before our eyes at the cavery on this occasion. A large plate of duck is presented with a red sauce that resembles blood but is just a subtle flavoured sauce. Parts of the duck are fatty and chewy, others a little brittle and overcooked but the bulk of the meat is tender and tasty. The fish of the day is a whole flat head and breaks up the meatiness of the order. From the land a braised short rib is presented with kale and mushroom. It takes everything in my will power not to pick up the bone and get all animalistic but I remember I’m surrounded by other diners and this meat popsicle needs to be shared. 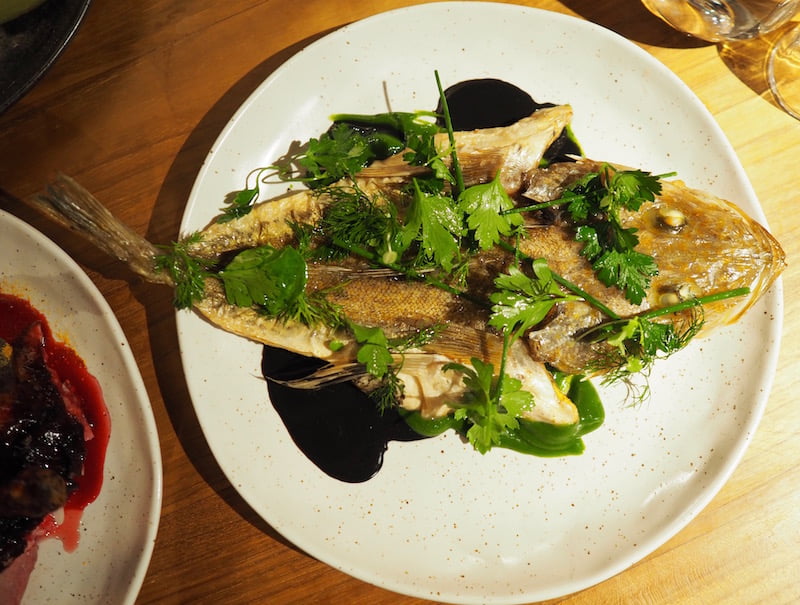 A side of potatoes with horseradish and soft herbs accompanies the meal because again “that’s Scandi as fuck” according to Sven. Quite possibly the coolest thing about dining at Mjolner is when you get to choose your “weapon of choice” with every meat order. A beautiful leather satchel is unrolled and a row of bespoke, authentic knives are presented for you to select one. They’re a little awkward to manoeuvre but all part of the theatre and fun. 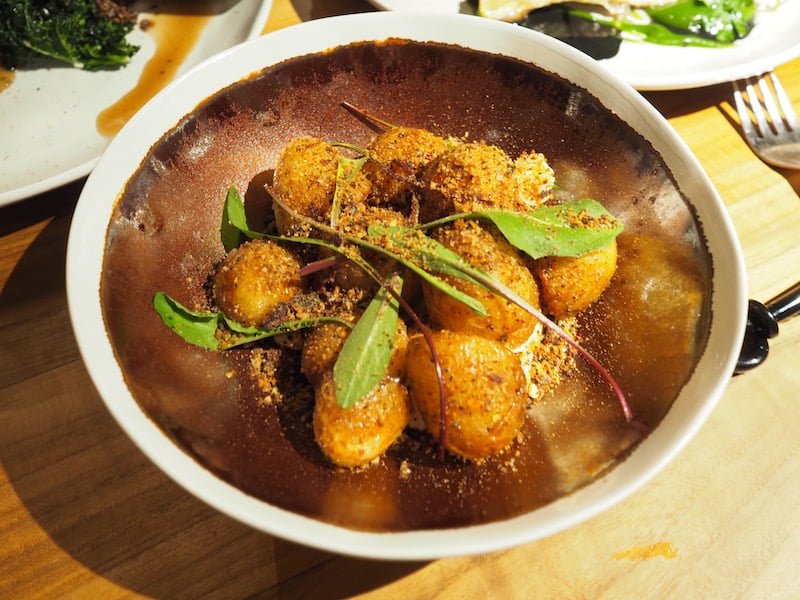 So what’s the verdict? Sven and team have timed the opening of Mjolner very well. Coming into winter this is a great spot to bunker down of an evening. Whilst the food offering is solid a few elements still need to be tweaked. The fit out and bar is what the group do well so this side of things is running smoothly. If you’re not into vikings or themed bars in general this might not be the place for you. If you’re looking for something fun, different and have a crush on Ragnar Lodbrok definitely book in to Mjolner.
Mjolner
267 Cleveland St Redfern 2016
0422 263 226
info@mjolner.com.au
Website