There are already many reasons to visit The Norfolk Hotel in Surry Hills. It may be the $3 tacos on Tuesday nights, their regular themed parties for any and every reason or – my personal favourite – their range of Bloody Marys, particularly tasty when only $10 on Sundays.
Now there is a whole new reason to wander inside the corner pub with the namesake neon sign, but rather than heading straight for the ever-popular beer garden, head up the stairs and past the giant red paper-maché crustacean, who looks like it’s had a few Budweisers. You’ve arrived at House of Crabs, the Drink ‘n’ Dine team’s latest funky foray into food and drink that is part seafood shack, part carnival and part dentist’s chair (stay with me here… you’ll soon understand why). 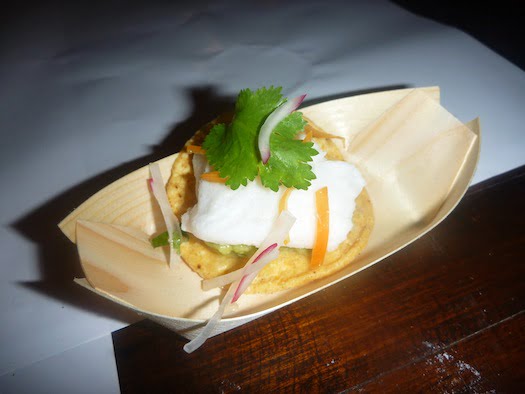 House of Crabs opened to the public on the first of November. At its recent opening party, guests were treated to a feast/show among the kitschy USA-nautical-with-an Australian-bent fit out! Canapés of Creole Corn with Dorito and Jerky Salt; Buffalo Cucumbers with Blue Cheese and Peanuts; and Ceviche and Guacamole with Corn Chips and Lime circulated the room. These were accompanied by cans of Budweiser and a variety of easy-drinking cocktails including the Peach Cobbler, consisting of rye, peach, lemon and soda. 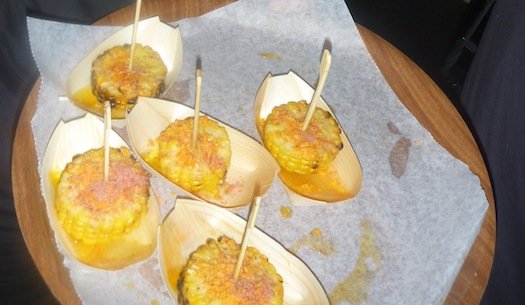 The feast continued, but really transformed into a show in which all guests were participants when the star performer arrived – the crab. And this is where the dentist chair analogy comes in. Each guest was decked out with large bib and thin white rubber gloves then seated at a long table covered in butchers’ paper. Various crustacean cracking devices were supplied, along with napkins, knives and forks. But we didn’t really need any of those things, encouraged to “just get in there” – emptying the sauced-up boiled crabs out of their see-through bags straight on the table, pulling them apart and breaking out the juicy flesh inside.
Because of the USA-style boiling process that is used to cook the crabs and other crustaceans on offer, they are not as hard to crack as those at most restaurants that we are used to in Australia. So my utensils sat unused. My napkin also sat unused using  the crusty sliced baguette instead to mop-up the leftover sauce on the table (and on my rubbery fingers). Sounds so ill-mannered now… but it was so normal (and fun) at the time! 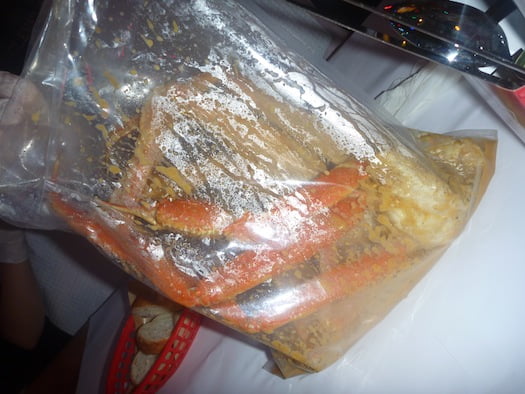 House of Crabs offers a variety of boiled crustaceans in 500g serves. Prices range from $16 for SA Mussels to $45 for King Crab and include your choice of sauce – Cajun, Mexican, Oriental or Black Pepper. There is also a great range of snacks, sides and other main plates available, which are delectable on their own or when combined with your chosen shelly delight to take a break from working so hard for your food! And once it is all over and the butchers’ paper has been rolled-up to collect the empty shells and soaked in sauce, you should stay for a well-deserved post crab thirst-quencher. Whether that’s upstairs among the ship-shaped bar with netting and nautical paraphernalia or back downstairs in the pumping pub is up to you!