Last Sunday I went on a day trip, it started with a tour through the wineries of Sicily, I then stopped by a Colosseum to have a laugh and a debate with some true chef legends about innovation in Italian cuisine and winded up with getting a cooking lesson on the foods of south Italy.  Along the way indulging and grazing on the finest of Mediterranean fare, all above the bustle of a typical Sunday at Sydney’s Fish Markets.
Gusto – a day hosted by CIRA (Council of Italian Restaurants in Australia) is in its 6th year, it’s an all day event that brings together Australia’s leading Italian chefs, producers, provedores and importers in a selection of cooking demonstrations, kids cooking classes, and, of course, yummy tastings.
From the moment I arrived I was hit with an overwhelming aroma of garlic and white wine mixed with an atmosphere of that unmistakable humour and passion, a feeling that made me instantly unwind. My Sunday slowed right down to an Italian pace starting with 12 tasting glasses of fine Sicilian wine. 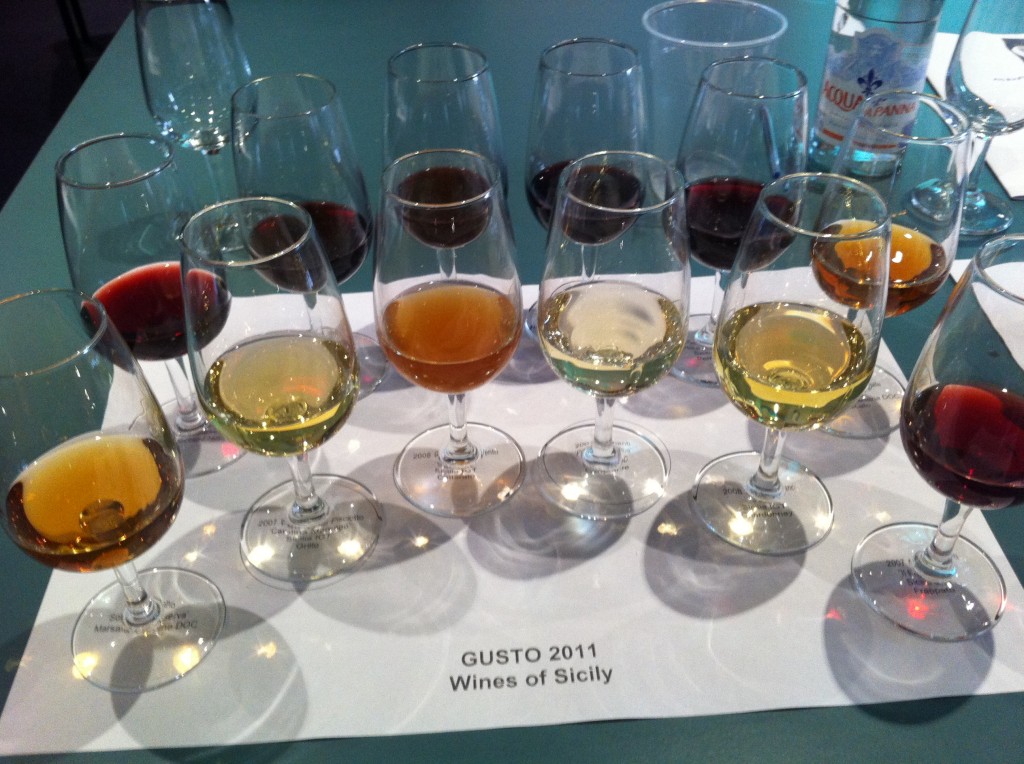 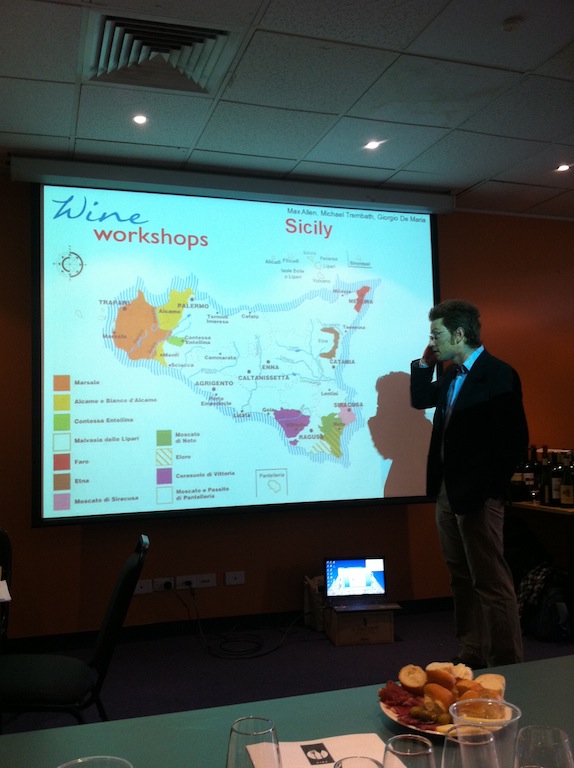 Taking the group on the wine tour was a panel consisting of Max Allen, Michael Trembath and Giorgio De Maria, of 121BC, himself a native Sicilian.  The trio were highly entertaining with many disagreements and lively debate, particularly around ‘natural wine’, wine a cloudy, slightly brown/orange liquid that and has been fermented and produced entirely naturally.  Let’s just say it met mixed reviews from our critics.
Everyone was in agreement however, about some other fantastic wines we tasted as we continued on our tour, learning about the revived soil from the recent eruption of Mt Etna, a rather questionable DOCG classification system and some pleasantly animated stories about the characters and families running the wineries back in Sicily.   Of the 12 wines my personal favourite a red 2006 Palari ‘Palri Faro’ from the region of Messina, which smelled exactly as Michael described it – like oily diesel, but tasted incredible.  The close second the 2007 Occhipinti ‘Il Frappato’ which was nicely summed up as ‘Sicily in a glass’.
Nicely warmed up, I went in hunt of some tasting plates, on entering the hall, I knew selecting my choices was going to be a tough task, here is just a selection of what was on offer. 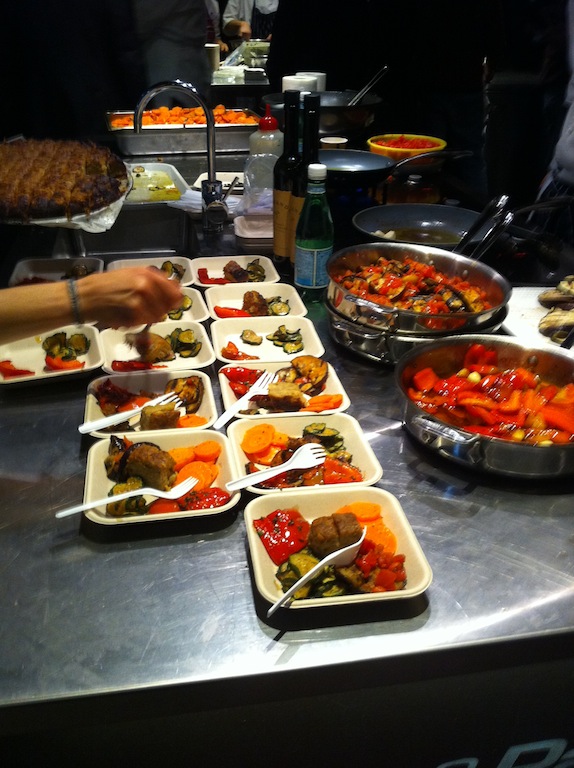 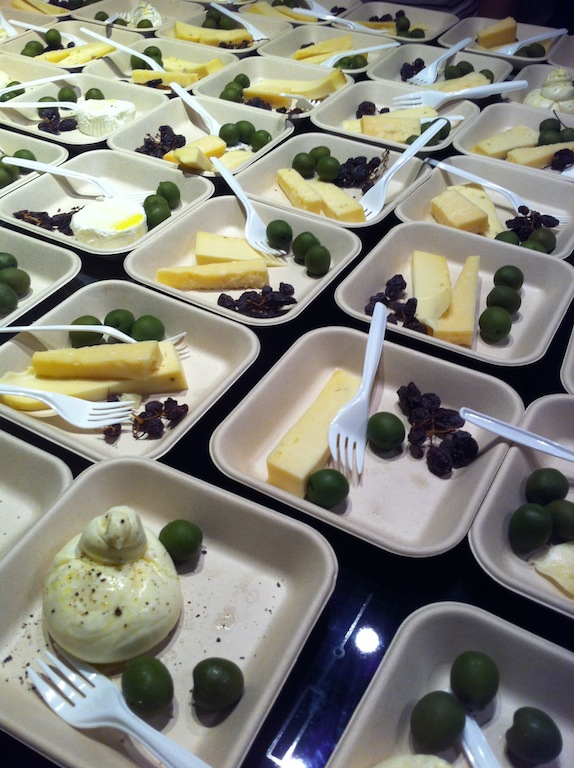 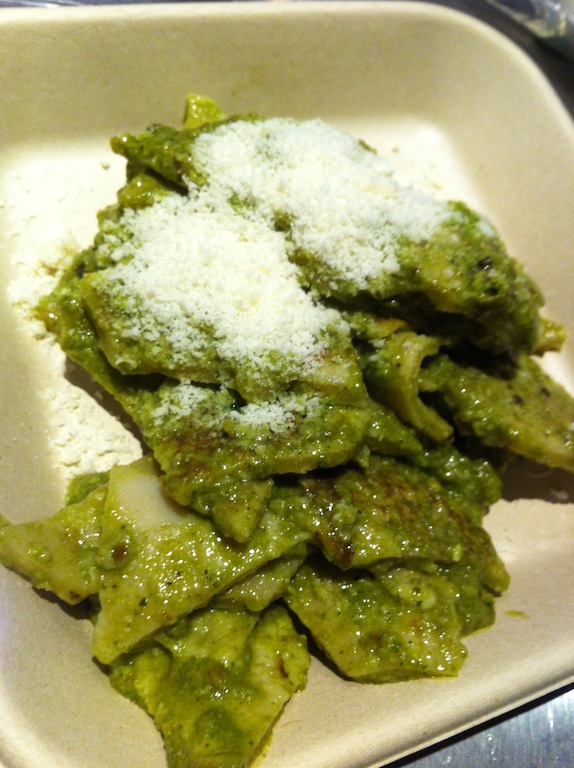 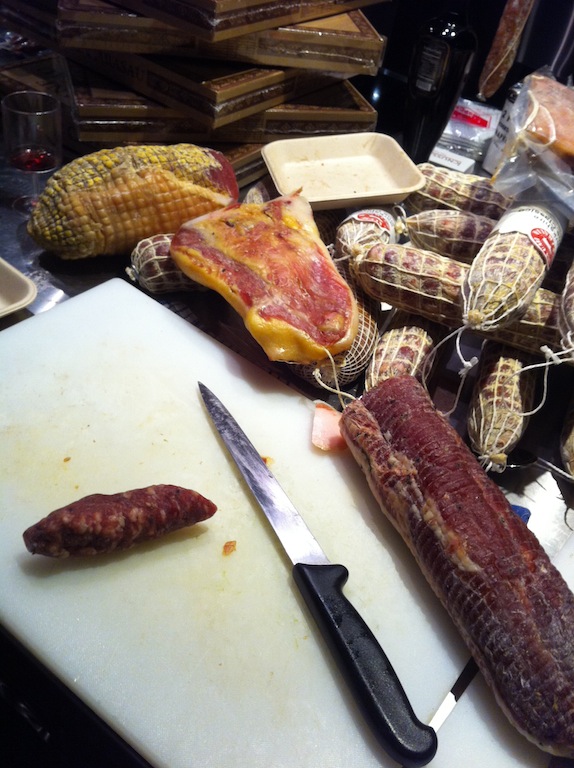 With a full stomach and with a refreshed glass of red I sat down to be educated and entertained by the teams on CIRA’s first ever Culinary Coliseum, debating whether ‘Italian cooking in Australia needs a good kick in the pans?’
It was nicely set up by facilitator Simon Marnie from ABC Sydney who made it clear this was an Italian debate, so of course, there would be no rules in the discussion.
Defending were
Pat Nourse, features editor and chief restaurant critic from Gourmet Traveller magazine.
Giovanni Pilu from Pilu at Freshwater
Rory Steele, who among many other prestigious roles was the Australian Ambassador to Italy 1997 – 2001.
On the affirmative
Lucio Galleto, a Sydney legend who opened Lucio’s in Paddington in 1983.
Simon Thomsen, restaurant critic for the Daily Telegraph.
Paolo Totaro – a Naples native.
The debate was as lively as it was fascinating.  With insights into how Italian immigrants in the 1970s pushed for vegie staples today like, eggplant, zucchini, rocket and even capsicum to be introduced to Australia.  Back then, they had to buy their Olive Oil from the chemists.
In the end the defending camp were named victorious, the crowd agreeing that Italian cooking in Australia had already had its big kick up the pans to establish a thriving Italian restaurant industry over the last 40 years, an industry that continues to benefit from the young emergent chefs who are now bringing their own Australian/Italian twists to old classics, which ensures the cuisine now only lives, but evolves on, as it always has done.
My final session was a real treat – a masterclass cooking session with Eugenio Maiale, A Tavola and Armando Percuoco, of Buon Ricordo, who I had seen actively and charismatically participating in the earlier debate, it was clear then he was a real character, so I was looking forward to the cheeky Italian humour  peppering the cooking class of the ‘Foods of the South’.   A class that was certainly not short of entertainment. 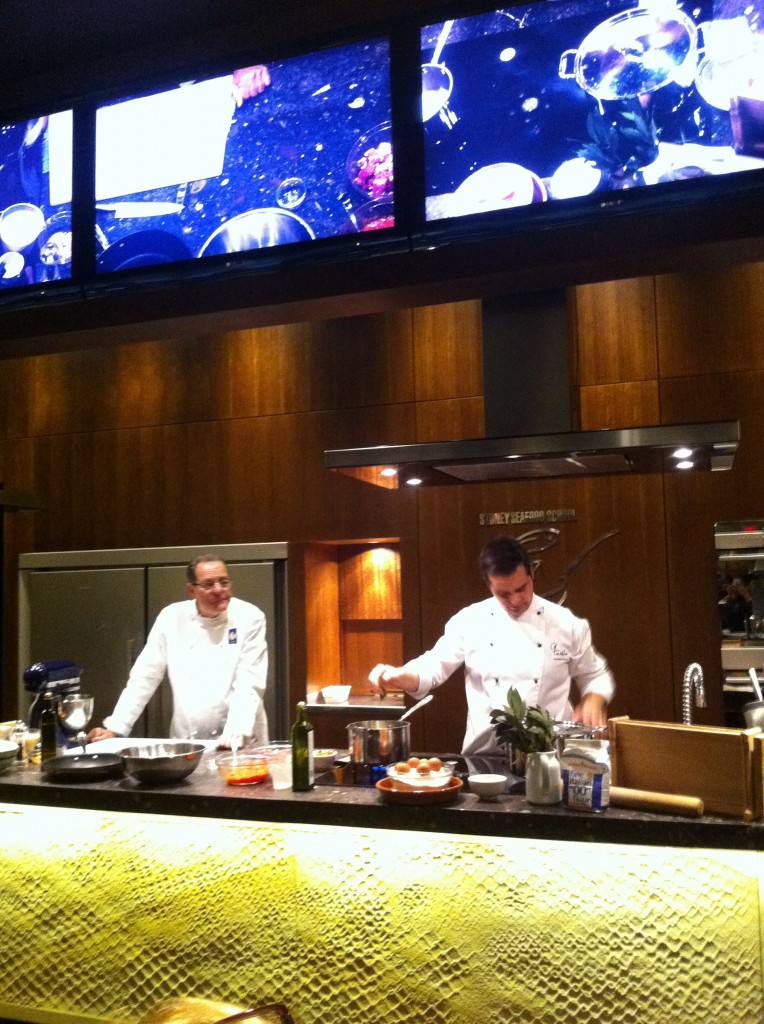 Eugenio introducing the audience to the traditional pasta maker – a guitar, from his family’s region, which with only a rolling pin, flour and eggs he was able to create fresh spaghetti, making it look much easier than I am almost certain it is. 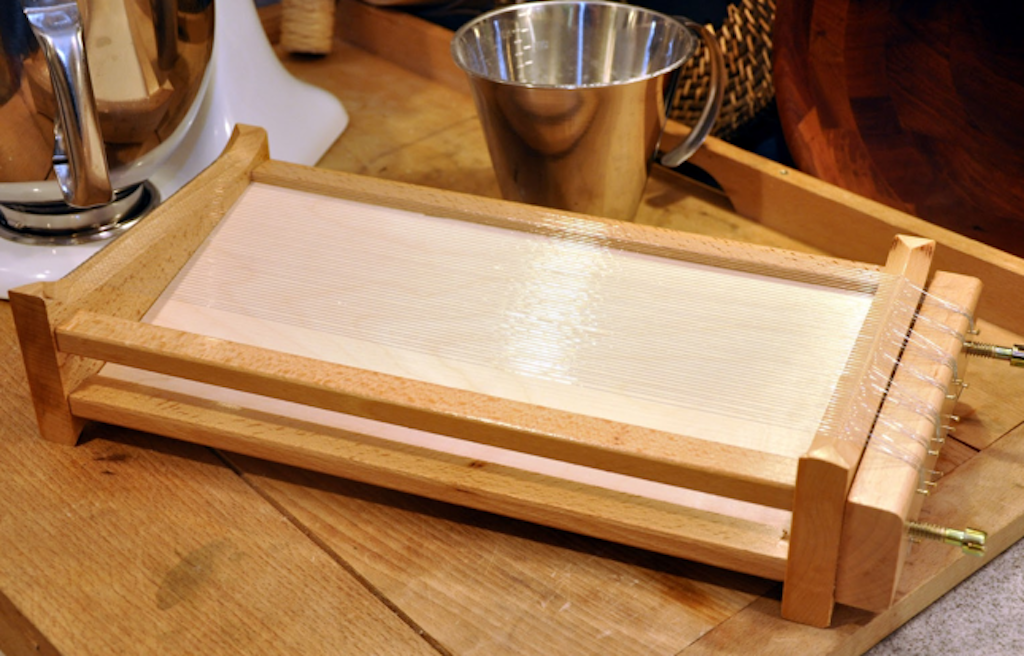 Simplicity was the theme of the class, Armando saying from the off that the dishes they prepared had been purposely chosen to help inspire people to cook quickly at home and deter them from take-away on their way home from work.
From the day, this was thing that really stuck with me.   The two chefs demonstrated how good, fresh, healthy food could be made fast, creating four dishes in just under an hour. 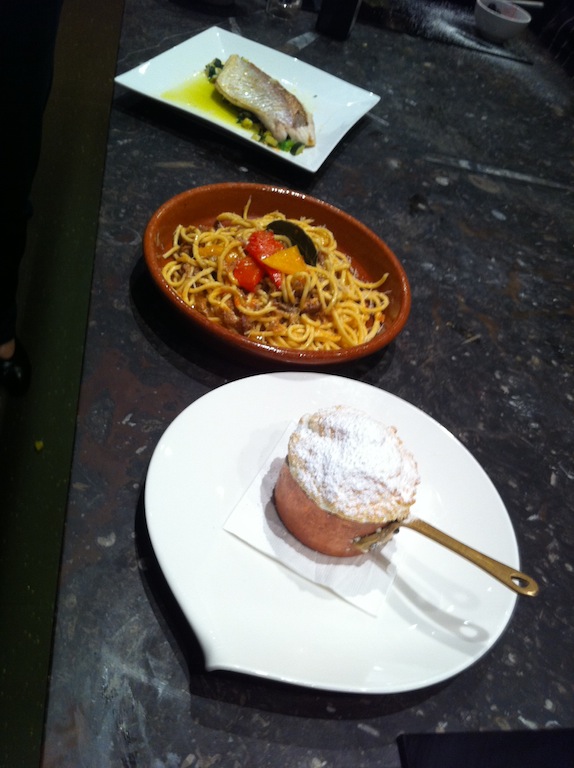 A lover of good food in restaurants, my own home cooking unfortunately rarely deters from microwave heating or ready to eat snacks  – but I made a promise to myself on that Sunday that I would leave inspired and committed to cooking and eating better at home.  So with my signed copy of Armando’s cookbook under my arm I went home with all the best intentions.  In the last week I can report I have had several successes including a recreation (and interpretation) of the live demonstration of Snapper and pan fried Zuchinni, my version minus the flowers, but instead featuring grape tomatoes and spinach and I am proud to say, I was very pleased with the results. 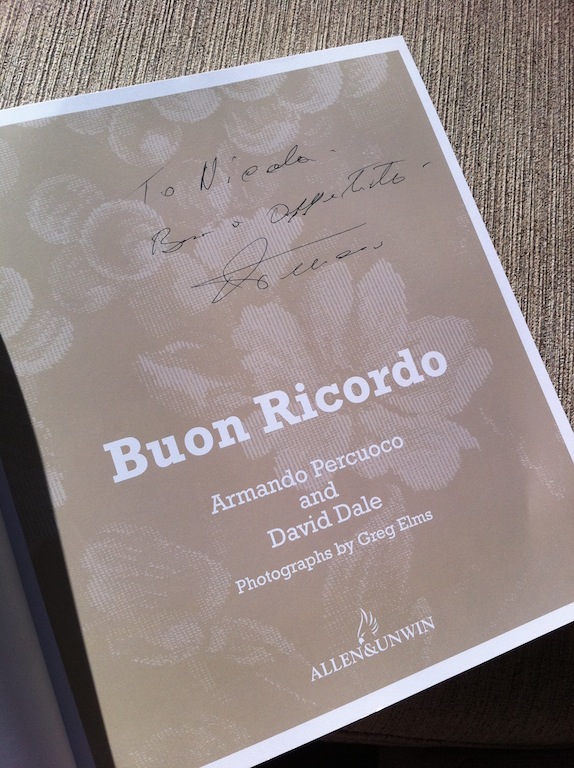 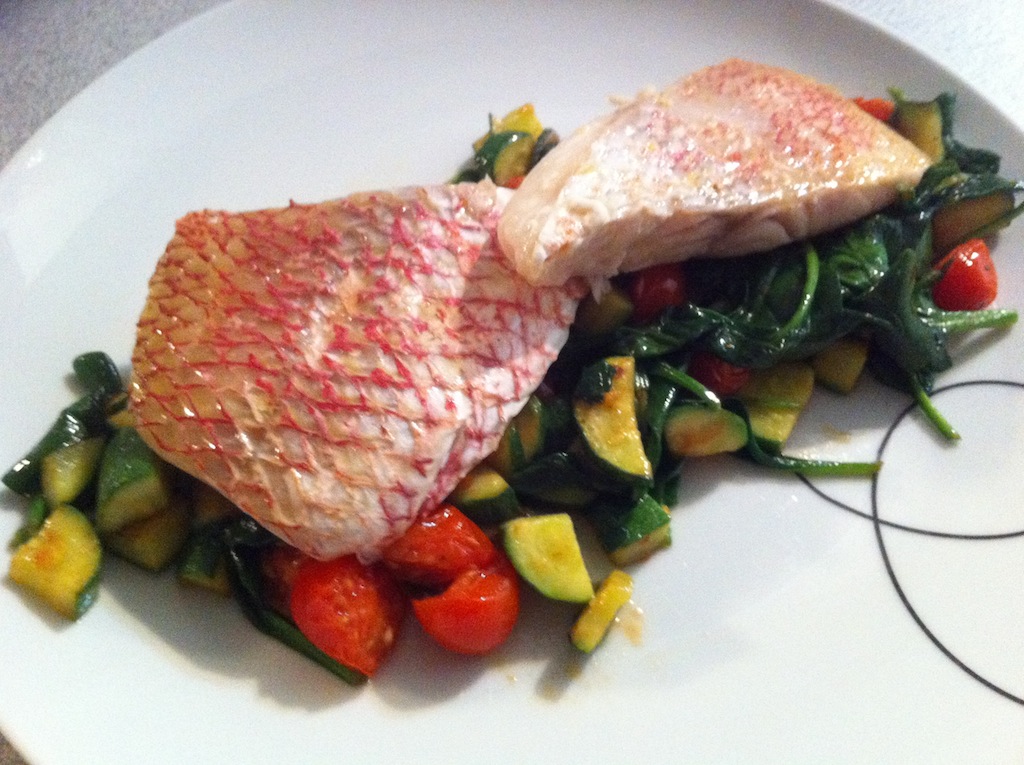 The things I love most about Italians are their good humoured passion, their love good food, wine and good life.  The day really made me appreciate how the strength of that passion has undoubtedly had a lasting impact on Australian food forever and will certainly continue to do so, blending traditions with a new generation of innovative thinking with fresh approaches to compliment and build on what their predecessors have worked hard to build.  It was an absolute pleasure getting to know characters like Armando, Lucio and Giorgio a bit better, I also hope can hold onto a little bit of their passion to influence my appreciation of my own good food long into the future.