DIY soup with over 80 ingredients.

On the outside, Panda’s Hot Pot may seem like just another abandoned warehouse exterior, but inside lies a golden Sichuan hot pot palace. What once was the home of the ever so popular Dracula’s, investor Yi Li had purchased the building for $10.3 million with a two year rebuild following soon after.

The revamped (no pun intended) space now can seat up to 268 and features a 1.5 tonne floating dragon in replacement of ghouls. At the centre of the restaurant lies a grand red and gold staircase, similar to those inside the olden day palaces in China. Throughout the restaurant there are martial arts weapons on the walls, and murals of ancient heroes paying tribute to the rich history of Chinese culture. The 1.6m long dragon sits at the very top watching both levels very closely, symbolising prosperity and strength.

The Melbourne restaurant is the first in Australia for the Panda’s chain, and all chefs and key ingredients used will be flown in from the Sichuan Province. Hot Pot Panda was established in China in 2015, but since has grown up to 400 stores in multiple countries. The flagship hot pot eatery will include Panda’s signature flavour, a spicy 12 hour broth cooked with Sichuan peppers and chilli sourced from Chengdu. For those who aren’t too keen on spice, there are also tamer options available on the menu (tomato, mushroom and pork bone). 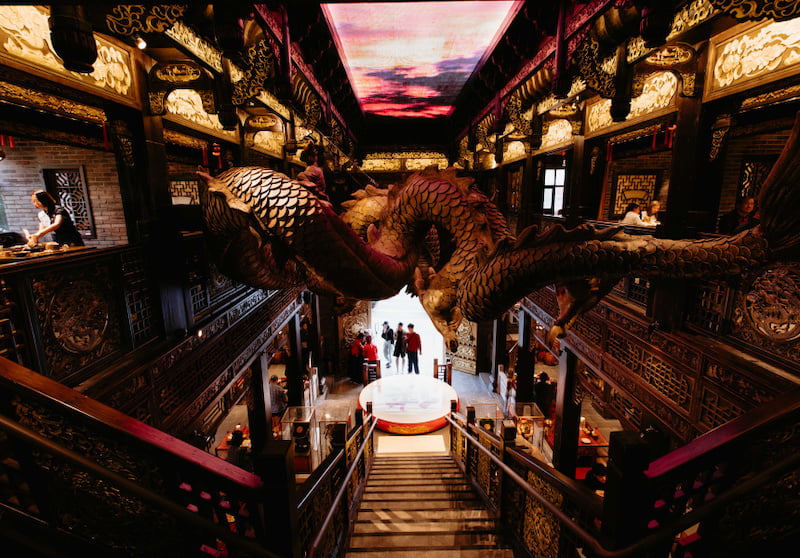 Now onto the best bit, the ingredient list of your DIY hot pot! After you’ve ordered your soup base and spice level, you can choose from over 80 different ingredients – from proteins like ox tongue, chicken, pork sausage, and spicy beef, vegetables such as enoki, Chinese cabbage and fresh lotus root. You can also order noodles and other carbs to complement your personalised broth. Make sure to also visit the dipping sauce station, where you can combine a variety of spices and sauces until you settle on your favourite.

Theatre will not die at Panda’s, much to the happiness of Melbournians who are nostalgic about Dracula’s. Instead, Panda Hot Pot will offer nightly Chinese performances, such as guzheng shows (a Chinese instrument) and Bian Lian (face-changing performance).