Whip out your aprons, it’s time to perfect Christmas ham this festive season!

Don’t panic, but Christmas is almost two weeks away! In between last-minute gift shopping, sourcing a turkey, buying the booze and cleaning the house, staying in the festive spirit can be tricky. Thankfully, we’ve taken the stress out of cooking the perfect Christmas ham… Here are three of our favourite Christmas ham recipes for you to try this festive season!

Multi-award-winning chef, restaurateur and culinary lecturer Darren Taylor has over 40 years of experience in the food industry. In 2012 Taylor launched his own catering company, Darren Taylor Catering. It’s from this time that he’s gone from strength to strength, feeding groups as big as 1500 for work dinner parties and as intimate as 10 people for a bespoke dining experience. In the spirit of Christmas, Taylor has kindly shared his baked ham recipe. Enjoy!

Method
Remove the skin leaving the fat that covers the meat. The skin should be cut in a zigzag pattern around the knuckle
Score the fat into 1 inch squares.
Press a single clove into the centre of each square.
Sprinkle nutmeg over entire leg.
Spread Dijon mustard evenly on top of nutmeg.
Sprinkle with cinnamon and pack an even 5mm thick layer of soft brown sugar over the cinnamon.
Place the ham in a dish with 1 inch of red wine and rosemary leaves in the bottom.
Bake at 180°C until the sugar is melted and evenly browned (approximately 1½ hours).
Allow to cool for a few hours before slicing. It is best when eaten still a bit warm.

Herbies is a name many of us are familiar with in the cooking world. Their range of spices crosses an entire spectrum of cultural cuisines, from India, Lebanon, Brazil, China and beyond. In Herbie’s Christmas ham recipe, you’ll notice their signature aromatic spices with other interesting ingredients (stout beer? yes please.)

Method
Preheat oven to 160C.
Remove skin from ham; score the exposed ham fat into diamonds 2.5 cm apart and press a clove into the centre of each.
Place ham in deep roasting pan. For glaze, mix marmalade with mustard and ground star anise and spoon liberally over the ham to coat thickly.
Pour apple juice and stout into the base of the pan.
Bake ham for 45 minutes, basting every 5-10 minutes with the juices.
Remove from oven when golden and stand for about 15 minutes before slicing.
If desired, the pan juices can be reduced down to a glaze and poured over the ham before cooling and slicing.
Once cool, keep refrigerated between uses, covered with foil or a tea towel.
Ham can be sliced and frozen in portions and kept for up to 3 months. 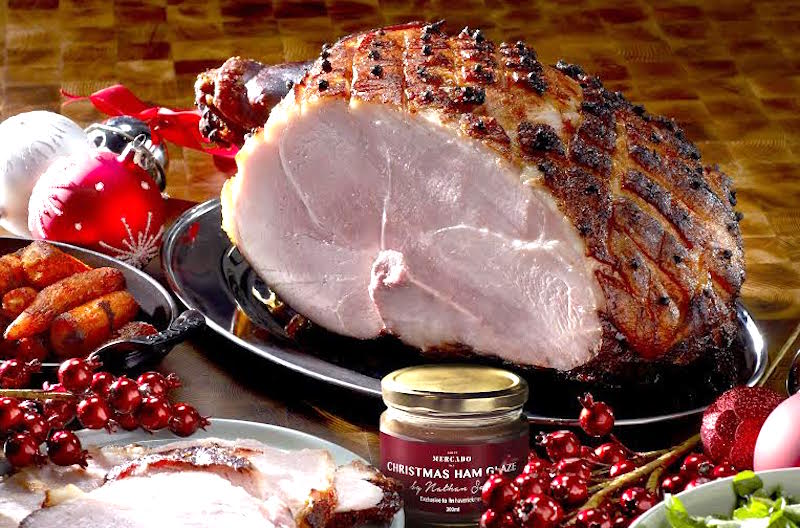 Method
Preheat oven at 180C for half an hour.
Peel the skin away from the Rare Breed Black Berkshire Ham by making a small diamond incision around the shank of the ham for presentation then very gently using your fingers pull the skin away from the fat of the ham.
Lightly score the fat of the ham into 2cm squares.
Place a clove in each square on the ham.
Place the ham on a tray lined with a cake rack so there is good circulation around the ham.
Lightly spread the Christmas Ham Glaze by Nathan Sasi over the ham using a pastry brush.
Bake for 20 minutes, remove ham from oven and reapply the glaze.
Repeat another two times until the glaze has caramelised over the ham.
Remove from oven and rest for 10 min.

Still stressed about the Christmas shipping? Here is the 2021 Christmas Gift Guide to help!