This toilet paper captures some of Donald Trump’s finest moments, most suitable for flushing.

If you’ve ever fantasised about brashly binning Donald Trump’s controversial tweets then your dreams have come true. A toilet paper brand called ‘Toilet Tweets’ is selling rolls of double ply toilet tissue, bearing the images of Trump’s most infamous remarks on Amazon.com.
The tweets are from his classical pre-inauguration period, deemed most suitable for flushing.
“Are you allowed to impeach a president for gross incompetence?” reads a tweet from 2014. 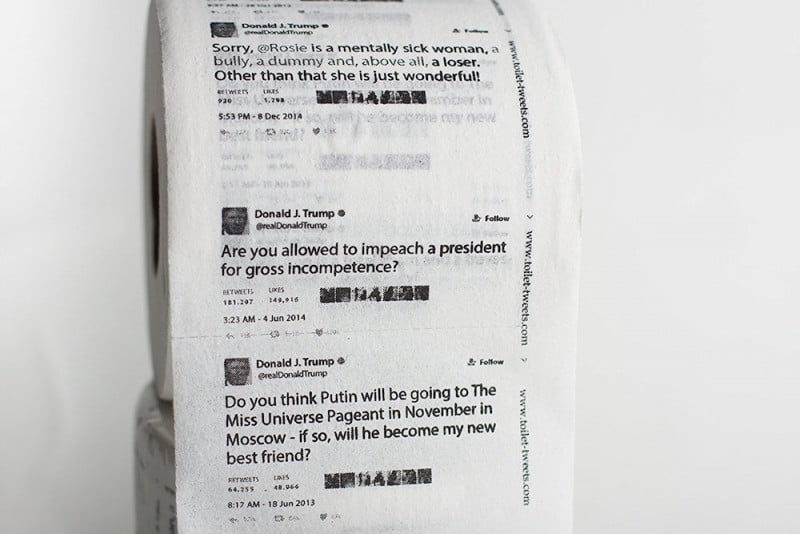 “Do you think Putin will be going to The Miss Universe Pageant in November in Moscow – if so, will he become my new best friend?” reads another 2013 tweet printed on the roll.
Based on many of his current remarks as President on the social media platform, no doubt several new tweets will soon feature on this tissue paper. Despite being priced at AUS $20 (US$11.99) for a single roll, the product sold out instantly when it first went on sale back in September 2017. Go figure.
Equally if not more amusing than the overpriced toilet tissue paper are the reviews of the product found on the Amazon webpage. One user said: “I’m really afraid these will make my backside dirtier instead of cleaner”.
Another customer remarked:“I used the product as directed, and it removed my waste well — as advertised. However, I don’t think the manufacturer realised that Trump’s tweets are so full of crap it ended up turning out to be an even exchange”.
For instant lol moments, you can read them all here.
Toilet Tweets isn’t the first company to sell such an ingenious product. Similar rolls of toilet paper are still available for sale on Amazon, including a roll with Donald Trump’s face for $12.95 as well as pencil holders for $14.68 that well…you can take a look for yourself on the website.
If you like weird and quirky things why don’t you check out are article on sploshing?