Amongst all the traffic and hustle of Redfern, is a hidden treasure tucked away called the Angry Pirate. The bar looks like a cross between a Pirates of the Caribbean set and the inside of a treasure chest, but with a really good sound system. With plenty of couches and low lighting make this the perfect destination for every pirate looking for a good drink. 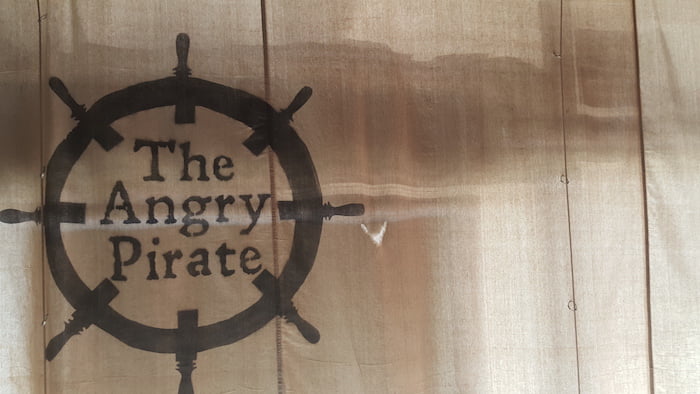 Part of the fun about drinking at The Angry Pirate is the cocktail list full of some of the most creative cocktail names we’ve ever seen. A Grog Father, anyone? Or perhaps a Captain’s Kiss for the ladies? But it’s not just the names that stand out, it’s the cocktails themselves. For the Angry & Sour, the Angry Pirate makes their own bitters for that extra tropical kick, dubbed “Angry Bitters” (presumably because “Pleasant Bitters” just doesn’t have the same ring to it).


The galley (read: kitchen) is open till midnight, to service the hunger of pirates who’ve had a long night of pillaging and feeding their parrots. If you’ve had a little too much swashbuckling’ fun, then one of the Angry Pirate’s pizzas is the way to go. Buy a giant Leviathan (too big for any one person to eat alone) and you’re donating to the Dry July effort, which is ideal for those who are a little too fond of their booze to actually do Dry July.


Need another reason to love the Angry Pirate? They are secretly tender-hearted, and are in cahoots with Sea Shepherd, supporting their efforts to end whaling all over the world.
Ahoy! Get down to the Angry Pirate, anchored at:
125 Redfern St
Sydney NSW 2016
Visit their website, Facebook & Instagram
Follow