What Do You Get When Swillhouse & Myffy Rigby Launch A Magazine?

A collection of thought provoking conversations with conductors, artists, sex clowns and chefs from all walks of life.

Nowadays, very rarely do you hear about the launch of a magazine. You know, that tangible, glossy covered book that reels you in with a trashy bold headline at the checkout counter. Let us preface that Swill, the latest magazine from Swillhouse (Shady Pines, Baxter Inn, Frankie’s Pizza, Alberto’s Lounge, Restaurant Hubert), is anything but customary. You will not find the hottest celebrity goss or trending fashions. What you will find is a collection of immersive stories about the wickedly creative, those who go against the grain.

Who better to tell these stories than adored Australian journalist, Myffy Rigby (formerly editor of Good Food Guide). She sits down with conductors, artists, sex clowns and chefs from all walks of life. The kind of people who approach life with purpose, to inform and provide thought provoking conversations. Myffy aims to put them in the limelight because they deserve to be heard. These pages are not printed for clicks, but to tell meaningful stories for inquisitive people. The stories Myffy has been lusting to write for years, including America’s last rock’n’roll bikini bar and magical seaweed found in the depths of Tasmania. 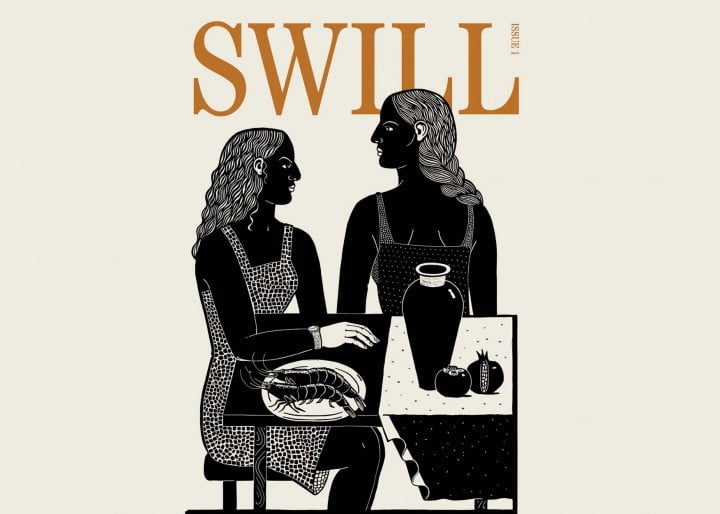 Alongside Myffy is an all-star team of creatives including Jordan Mcdonald, the beer monster behind Frankies Pizza, Allie Webb whose beautiful printwork graces the issue 1 cover making Swill the ultimate coffee table read, publisher Anton Forte who decided the magazine needed to be a hefty 1kg and Sydney-based photographer Ellen Virgona who brings the stories to life with cutting edge visuals, to name a few.

In celebration of the launch, we asked Myffy Rigby a few questions to gain insight into the magazine and her favourite spots in Sydney right now.

What defines a story told by Swill Mag?

“Swill Mag stories are original pieces focussed on the art of hospitality and everything that encompasses. They are broad-reaching and told with intelligence and joy. Pieces that we find fascinating. And with any luck, our readers will too.”

What story has particularly stuck with you from issue 1?

“That’s like trying to choose between my babies! But the Jumbo’s Clown Room story was particularly close to my heart – I’d been trying to write that one for years, and noone wanted it. Too many butts, I guess.”

Can you share any insights into issue 2? When can we expect it?

“An action packed lineup greets us with issue two of Swill magazine. We talk to Vincent Peranio – longtime John Waters collaborator and the designer behind Emmy award winning television show, The Wire. We travel to Mexico to view one of the world’s most engrossing cities through the eyes of its signature sandwiches. Author Michael Pollan writes about his experience with mescaline and Michelin starred chef David Thompson schools us on Thai cookery. We visit a bar in Beirut devoted to Angelina Jolie and bid farewell to Frankie’s Pizza – with touching words from music greats including Ryan Adams. And that’s just the entree. We also have Mr Stanley Tucci himself for the main course. This is not a drill. Issue 2 is out in late January.”

Where do you go for a no-frills feed in Sydney?

“Few things compare to ordering a stack of Bella Brutta pizzas taller than your head, grabbing a few choice bottles from PnV and destroying it all in the park on a sunny Sydney afternoon.”

“A gibson, forever and always – it’s a snack and a drink in one.”

What is your biggest career pinch-me moment?

“Launching Swill magazine, for sure. What a ride.”

Get your hands on Swill issue 1 here and be the first to hear about the release of issue 2 by signing up for the Swillhouse newsletter.