Since opening in December 2018, Soul Dining has endured the slow grind of construction work that has plagued shop owners on Devonshire street. Despite this challenge, they continue to thrive with their new age Korean menu. Restaurant owners, Illa Kim and Daero Lee, have taken their childhood memories of traditional Korean food and modernised it based on their culinary experiences in Australia and Europe. The cuisine at Soul Dining can best be described as celebrating Australia’s multicultural melting pot.

The restaurant’s design blurs the distinction between casual and formal. Charcoal concrete walls have jutting exposed brick yet are lined with royal-blue velvet seating. The room is dimly lit to create a cosy atmosphere and soften the metallic room.

Warming the restaurant’s atmosphere is Soul Dining’s Manager, Hyunchul Kim, who will guide you through the drinks menu. It features Australian wines ($10 to $12 per glass), cans of Korean lager ($6) and Asian fusion cocktails ($18). If you enjoy a full-bodied red wine with fruity notes, the Tim Smith ‘Bugalugs’ Shiraz from the Barossa Valley ($12) pairs perfectly with their bold spicy flavours. 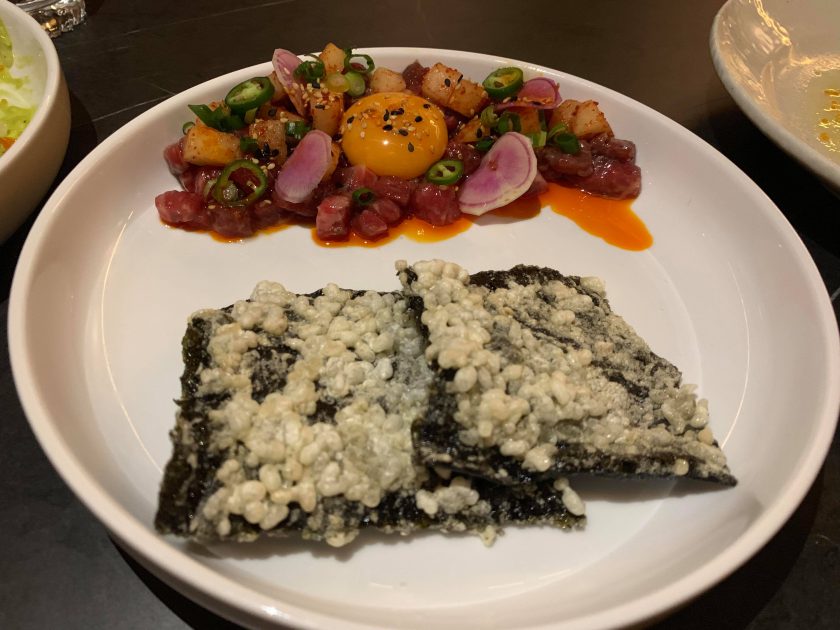 Embodying their blended menu is the Beef Tartare ($22), which is served with egg yolk, green chilli, singo pear and seaweed crackling. With surgical precision, you’ll have to slice open the egg and time your Instagram boomerang game to perfection. Ultimate satisfaction will be gained as you watch on repeat the egg ooze out and coat the raw beef in a thick yellow sheen. While visually superb, your mouth will also sing with the textural combination of soft yolky meat against the crunchy crack of seaweed. 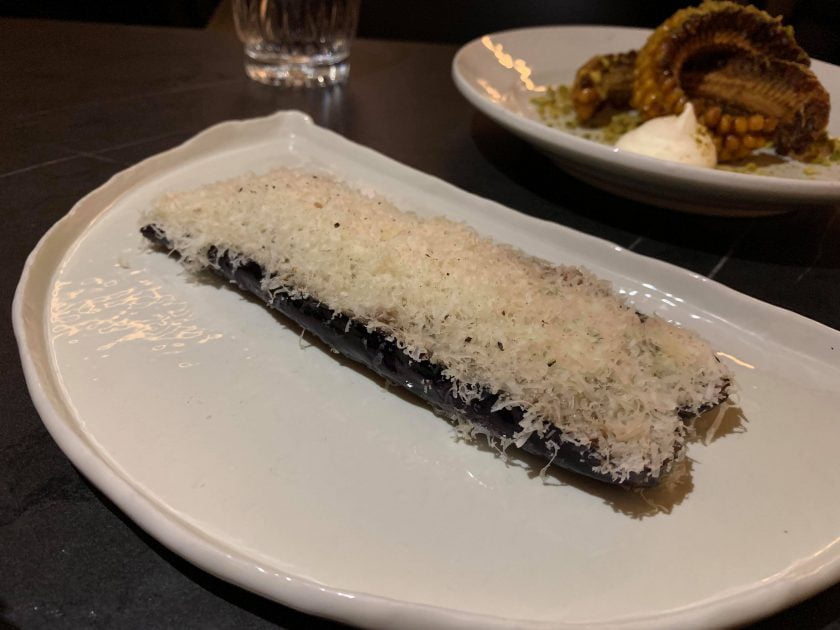 Korean eggplant ($14) comes with tomato jam, anchovy paste and parmesan. From the first bite, the salty-sweet umami flavour combination of a thick tomato reduction and sharp parmesan cheese hits the back of your mouth and leaves you craving more. 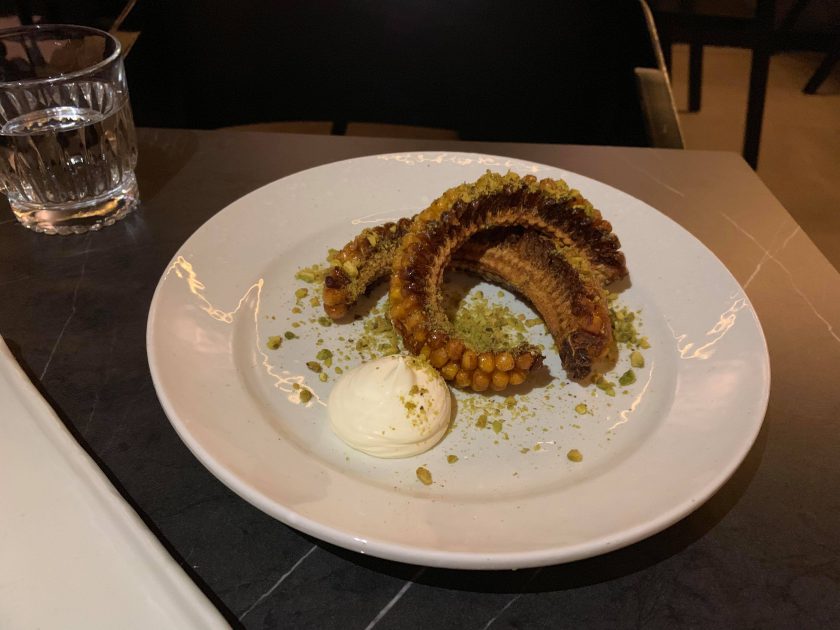 A similar umami flavour comes from what looks like a rack of ribs. It smells deep, dark and meaty but you’ll suspiciously raise an eyebrow when you realise it’s Corn ($12). This is no ordinary corn on the cob, it’s boiled, flash fried and grilled before being sprinkled with smashed pistachios and crème fraiche. You’ll be licking your fingers as you gnaw on the cob trying to rip away every last kernel as one might strip the sinew from a bone. 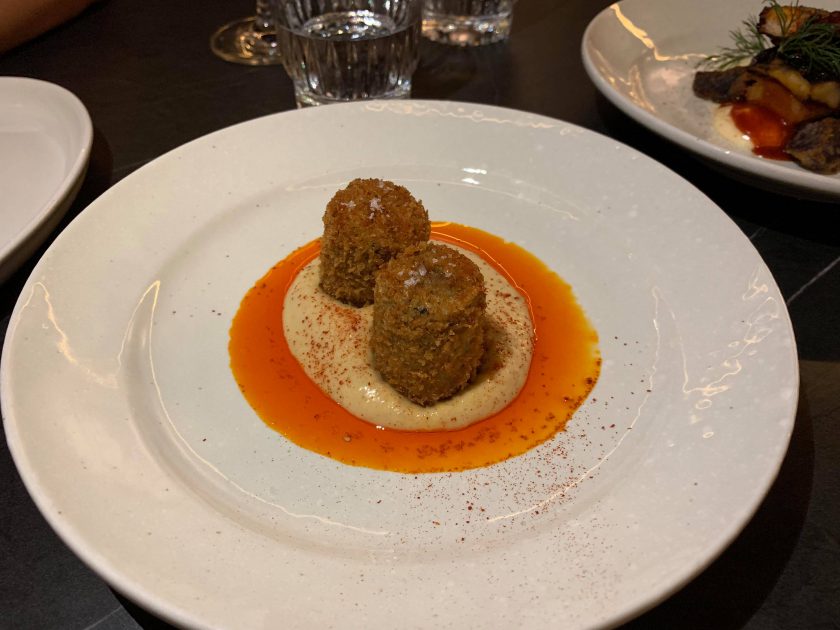 Black Pudding Croquettes ($16) are served on a spicy miso aioli. While pork blood sausage may not appeal to everyone, the crunchy crust that encases it should win over most diners. The creamy miso aioli acts as an island surrounded by a red hot molten lava like chilli oil. The chilli oil packs a punch that breaks through the pungent mix of garlic and meat that is encased in the golden nugget croquettes. 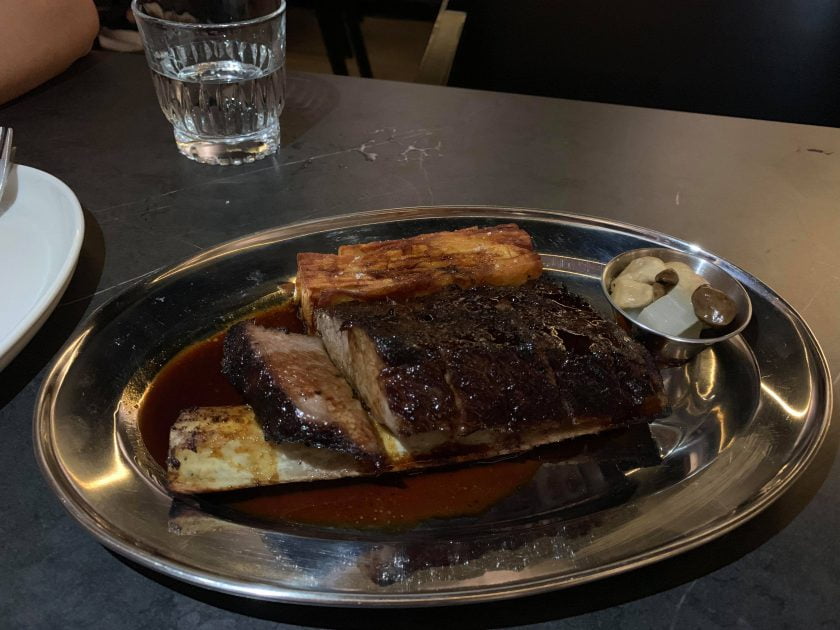 For main, try the juicy Beef Short Rib ($38), which comes with a crispy potato gratin and house-made mushroom pickles. The meat has bobbed in a 60 degree sous-vide bath overnight and from the first bite, it will dissolve in your mouth. The mushroom pickles add an acidic relief that cleanses the palate and cuts through the richly intense soy flavoured jus. 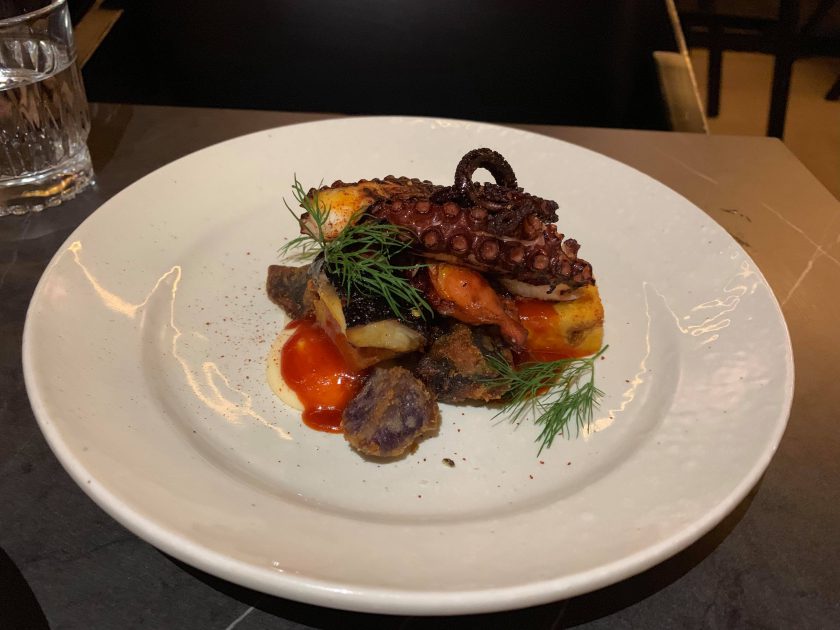 Grilled Octopus ($24), is served with triple cooked African potato, aioli, 3S sauce. A sprinkle of dill perfumes the dish and adds a lightness to the smoky charred octopus. Another seafood sensation is the Raw Kingfish ($24), which combines avocado, white kimchi and soybean paste. 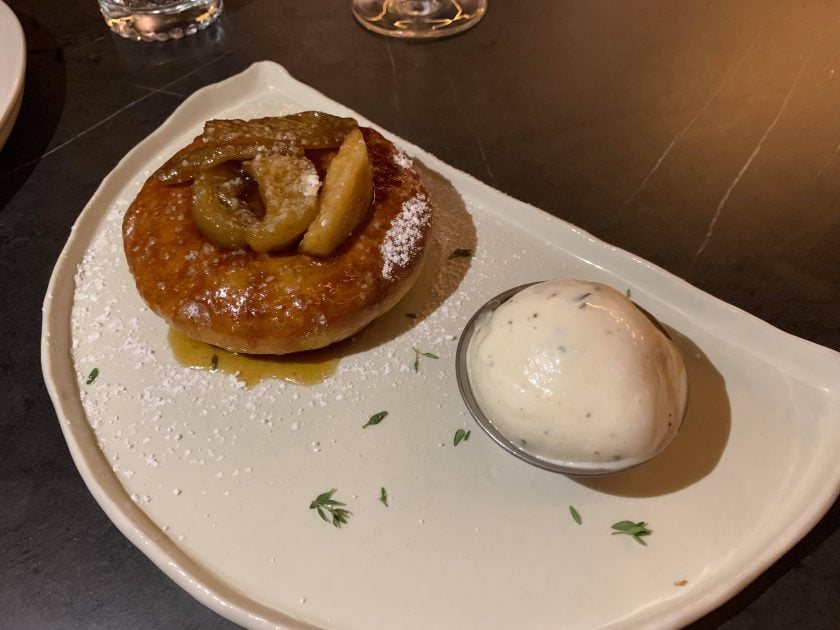 To finish the meal, indulge in their Cinnamon donut ($15), which comes with thyme vanilla ice-cream and stewed apple. The piney peppery thyme aroma adds depth to the vanilla ice-cream and elevates this dessert beyond just a nostalgic apple pie. To try all these dishes, we recommend you get the Chef’s Tasting Menu ($65).

While the food could be deemed modern Korean, it has subtly combined an array of flavours in a way that subverts cultural paradigms. The Soul Dining menu pulls together flavours, ingredients and techniques from a global pantry in the pursuit of deliciousness. You will taste a dish and not think it’s one cuisine or another, it’s simply enjoyable and in that regard unequivocally Australian.