Take a food safari around Sydney during No Meat May

Know a die hard meat fanatic? Why not challenge them to No Meat May.

No Meat May is an Australian initiative challenging carnivores to give meat the chop for the month of May. With more meat-free options available to Sydney diners than ever before, this year’s event is predicted to see a record number of partakers get involved across more than 50 countries. Now in it’s seventh year, No Meat May is expecting 10,000 new recruits to ditch meat, or all animal products (including all egg and diary) from their diets for 31 days.

To help you survive and thrive the month minus meat, Co-founder Ryan Alexander reveals a seven stop food safari showcasing the best in meat-free dining in Sydney.

As the first vegan restaurant in Sydney to score a hat, Waterloo’s Paperbark should be on your radar regardless of your meat-eating preferences. Working with small-scale producers, this plant-based restaurant really hones in on the use of native Australian ingredients.

Make the trip north side to Manly’s nautical themed bar and be impressed by their vegan offering. Here you’ll find a full vegan menu with an array of plant-based burgers. Made with an artisanal, property blend of natural plant proteins, you can enjoy nutritious ‘meat’ without the animal. Team it with a signature cocktail and you’ve got yourself a seaworthy night out. If you’re with friends who aren’t quite ready to commit to the meat free challenge, Mark & Vinny’s will appease both carnivores and herbivorous folk alike. This spaghetti and spritz bar in Surry Hills does everything from a plant-based carbonara pasta with its very own vegan egg yoke to more classical dishes like spaghetti Vongole.

The name says it all at this Darlinghurst café. Here you can expect top-notch friendly service and a winning vegan Thai menu to match. Situated in the heart of Darlinghurst, you won’t find any meat of fake meat on the menu. Just quality fruit and vegetable dishes including aromatic curries, soups, fresh spring rolls, roti and more. A flakey vegan chocolate croissant? Now we’ve seen it all. Gathered Kitchen in Glebe is well known for its top-notch vegan breakfast menu including totally plant-based toasted cheesy bagels, breakfast bowls and more. Haven’t been? Put it on your brunch list.

Sydneysiders further south can pop into Vegan Island In Campbelltown. With a child friendly and wide-ranging menu of meat-free burgers plus decadent shakes, you definitely won’t leave hungry. 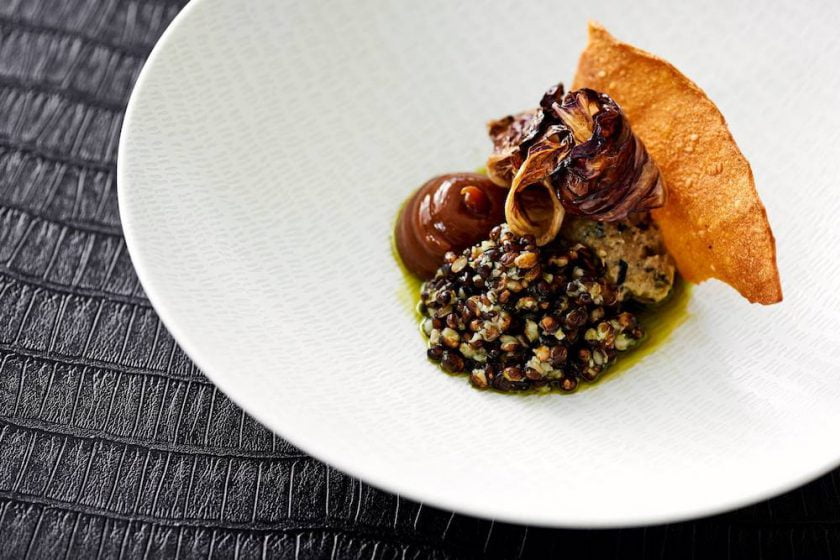 Situated in Sydney Harbour on the 47th floor is this iconic revolving restaurant, O Bar & Dining. Here you’ll find a dedicated plant based menu reflecting a collaboration between O Bar’s chefs, farmers and growers. All produce is locally sourced, between Hawkesbury, the Blue Mountains and the Hunter Valley.