Hennessy Takes Over Bondi Icebergs With A Pop-Up Basketball Court

Hennessy has launched a series of baller experiences inside Sydney’s most iconic lap pool to celebrate the NBA playoffs 2021.

Just when you thought Bondi couldn’t get any cooler, the worlds largest cognac producer Hennessy has transformed Icebergs Pool into a beachside basketball court. The night before the playoffs, Hennessy and the NBA brought their partnership to Australian shores to turn Sydney’s most insta-famous pool into a playing ground. Designed by Studio Messa, the monochrome court stands out against the turqoise waters making this the most picturesque court to play basketball worldwide. This may just be the only time you’d see ballers shooping hoops with a backdrop of surfers taking 3 foot waves into the shores. 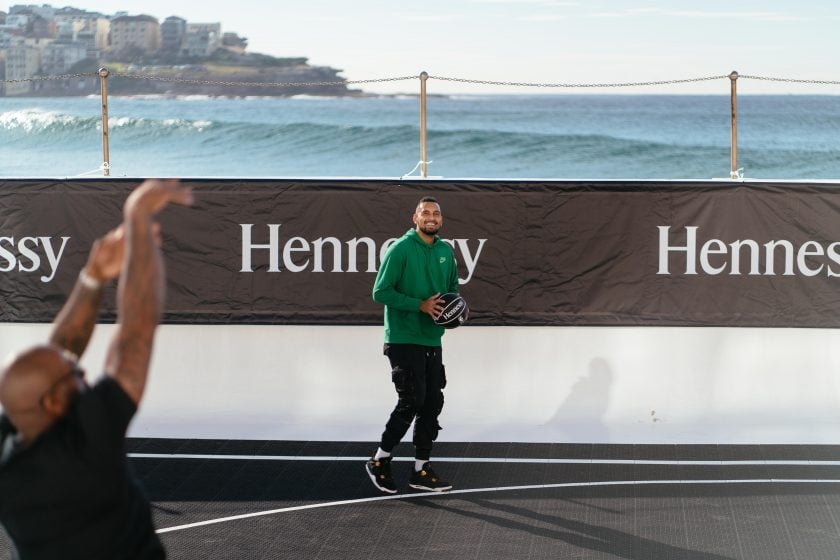 Fromer NBA players Andrew Bogut and Corey Williams were joined by Australian tennis phenomenon Nick Kyrgious for the officially court launch on Saturday, May 22. Kyrgious proved he’s a master at multiple ball sports when he beat a group of contestants in a half-court shot competition. Musician Flex Mami manned the decks and kept spirits high all morning with a mix of hip hop and R&B tracks.

For a once in a lifetime shot, Hennessy x NBA will also realease a $100K SHOT competition beginning June 7 until the end of July. Fans can purchase a bottle of Hennessy VS to be entered in the draw to attempt a half-court shot and win $100,000, as well as an exclusive Hennessy x NBA merchandise prize packs.

More details to be released soon.

If you’re heading down to check out the court, perch up at one of the Best Restaurants In Bondi.