In the ever-expanding melting pot of Glebe Point Road, it can be difficult to decide where to go. Glebe’s latest addition, The Charleston, stands out amongst the crowd and offers diners authentic Southern cooking.

The Charleston is the second Inner West venue from Sydneysiders, Rob Teitzel and Osman Misirlizade, co-owners of The Cottage Bar & Kitchen in Balmain. The dream for a Southern-inspired restaurant comes from their travels throughout the southern states of the US.

Helping shape this dream is an award-winning interior designer, Matt Woods (Beccafico, The Rooftop). Matt brings the 60-seater room to life with a pastel-palette of pink walls and exposed brickwork throughout the restaurant, which are notable features of Charleston’s historic waterfront homes. Similarly, high-tables, large hanging ferns and an open-kitchen area accentuate vibes of modern Southern living. In the kitchen, Head Chef, Ellena Kim (The Morrison, Uccello), incorporates traditional flavours of the south with fresh, local produce. The menu of seafood, barbecued meats and vegetarian dishes is inspired by South Carolina and Coastal Charleston cuisine. 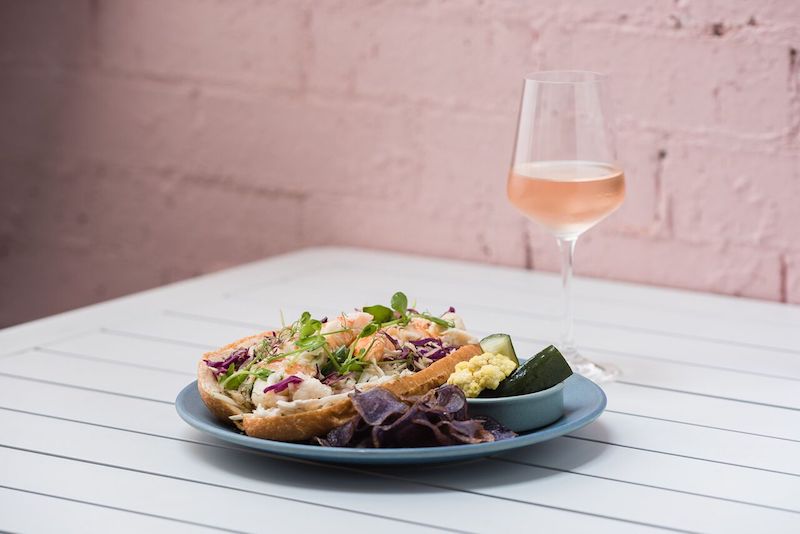 The Charleston’s signature dish is the Lobster Roll ($42) with kohlrabi, apple remoulade, house pickle – served in a luxe milk bun. The dish is a fine balance of both flavour and texture, with sweet lobster complimenting crunchy apple and sour pickles of cucumber and cauliflower. Similarly, the soft milk bun soaks up the slaw without becoming a soggy mess that disintegrates in your hands. The dish boasts 200g of lobster, which might not seem like a lot but this jumbo roll is a true American-sized portion.

Another American classic is the Hush Puppies ($12) with Cajun dipping sauce. While the name ‘Hush Puppies’ is synonymous with the American shoe brand, these golden crunchy treats will redefine your word association. They are similar in taste and texture to a corn fritter, only bite-sized, making for the perfect bar snack. 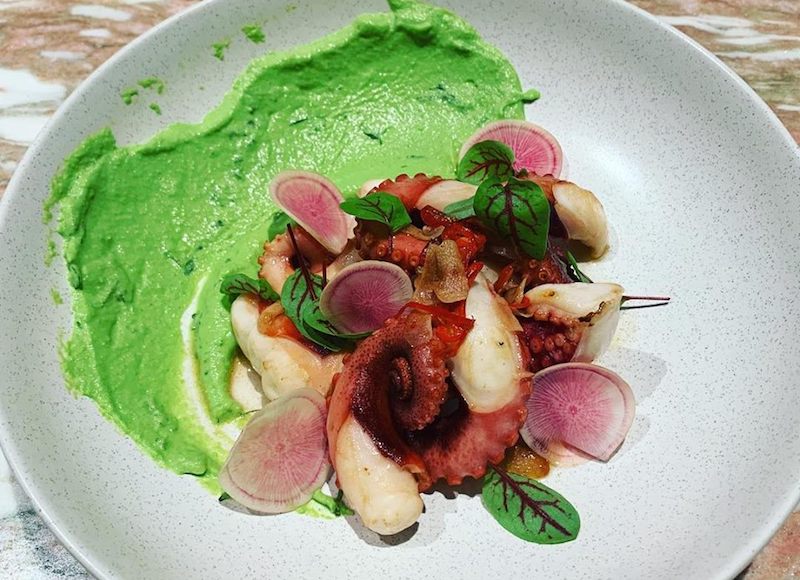 Also on the starters menu is Baby Octopus ($23), which comes with olives, minted pea puree, pea shoots and watermelon radish. This dish brightens the table with splashes of pea green and pink radish. Hidden beneath the colours are large tentacles that tantalise the taste buds. However, a heavy hand on the seasoning made the octopus a touch too salty and a little dry. This was offset to an extent by the mellow pea puree and sweet pea shoots.

Paying homage to the great BBQs of the South is the Beef Short Ribs ($32) with sweet corn and chimichurri. The layers of rendered fat and fall-apart meat are lathered in an intensely thick coating of sweet smoky BBQ sauce. To cut through this rich meaty mound is a vibrantly green chimichurri and charred corn that adds vibrancy to the dish.

To finish the meal, the Brioche Donuts ($13) bob in a Bourbon glazed pool that will satisfy your sweet cravings. Be warned, they are not light and fluffy but dense and crunchy on the outside with a soft cake-like centre. We suggest you dunk the donuts multiple times to soak up the addictive bourbon glaze.

If you prefer wine, indulge in a bottle of their Paxton Biodynamic Tempranillo ($58), which is a medium bodied red wine that pairs well with the smoky BBQ flavours from the menu.

With such a diverse range of eateries on Glebe Point Road, it can be tricky to know where to go. Next time you find yourself trawling the never-ending street, save your time by taking friends and family to The Charleston. Check out the full menu here, or head to the website for more information.