Ah the humble meat pie, emblematic of good ol’ straya. Teamed with an afternoon at the footy, it’s about as Aussie as it gets, right? Well what if we told you that meat pies actually belong to Europe? The first pies, called ‘coffins’, were in fact used as a way to preserve meat. The pastry, which some would argue makes for the best part, was not meant to be eaten at all! Whilst this news may baffle many, British born pie maker Ryan Broomfield would seem more than willing to take ownership of this culinary icon. He’s the owner of Broomfields pies.
These days, you won’t find Ryan Broomfield in drizzly London, but rather on Manly’s bright and breezy shoreline. He made the trip over to sunny Australia in 2011.
His mission? Well it’s pretty simple really, to make pies. These aren’t any old stodgy Four N’ Twenties you find at the servo though. Broomfields all-butter pastry pies combine the finest local ingredients with the iconic flavours of Ryan’s British roots. 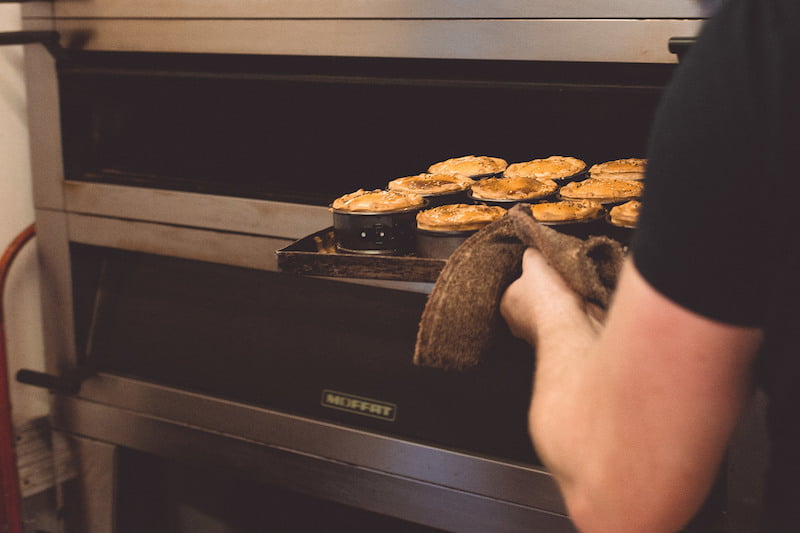 If you ask Ryan where he learnt the art of pie making, he’ll tell you that it’s from his brother Neil. Neil was dubbed Britain’s Supreme Pie Champion of Britain 2015 and is now a judge of the British Pie Awards.
As to where you can find Ryan Broomfields gourmet pies, Manly locals should keep an eye out for his PieCycle down at Manly Wharf. Broomfields PieCycle is a custom made Christiania cargo bike by The Bicycle Import Company, Byron Bay. The PieCycle is a nod and a wink to Sydney’s original flying pieman William Francis King who in the 1840s sold pies to Parramatta steamer passengers. It also references the pie hawkers of Victorian England who would sell pies from trays carried on the head. 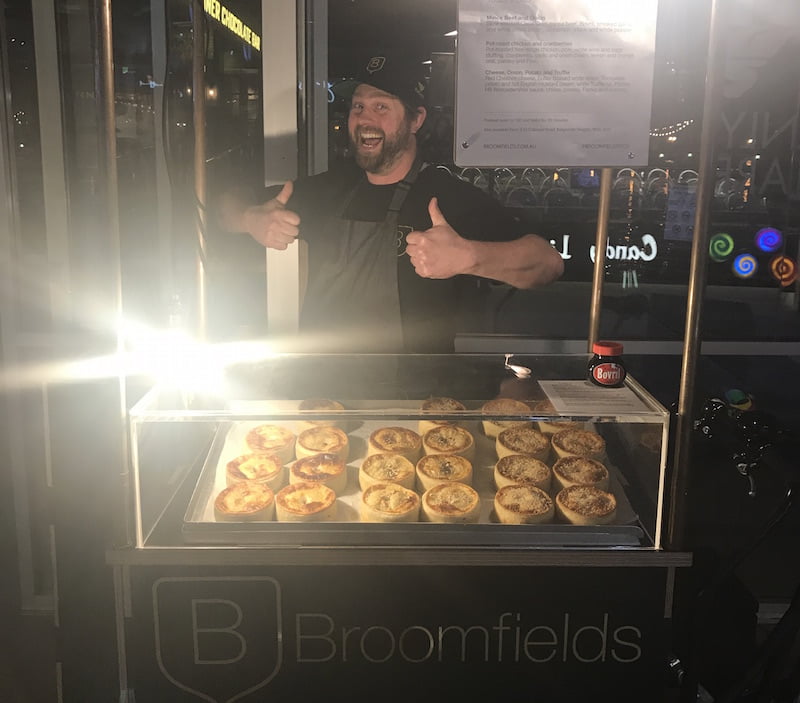 Ryan’s PieCycle sells an assortment of gourmet creations every Wednesday night from 3pm until sold out.
It’s on a particularly cold Wednesday night that I stumble across the Broomfields PieCycle. Tucked into a small fold of Manly Wharf’s recently redeveloped ferry terminal, a warm light glows from the little stand, luring you in. Ryan’s friendly smile is the first thing that greets you. The next thing is a clear box with his buttery, glistening pies inside.
On the menu tonight, a selection of three – pot-roasted chicken and cranberries, cheese onion potato and truffle and mince beef and onion (all $10). If you ask Ryan which pie is the most popular, he’ll argue that most locals can’t go past the classic pairing of beef and onion. That being said, it’s the pot-roasted chicken and cranberries and cheese, onion, potato and truffle pies that really grab my attention.
With my pies in tote, I make the brisk walk home.
A word of warning, don’t get too hungry and bite into your pie before you make it through the front door – all Ryan’s pies are sold cold. The idea is that you take them home and pop them in 180 degree oven for 20 minutes.
‘That 20 minute window gives you just the right amount of time to pour yourself a drink and whip up a lovely side salad’ Ryan explains. It also gives you the chance to put some of your own love into the pie. It’s more than just a fast-food or take-out option. 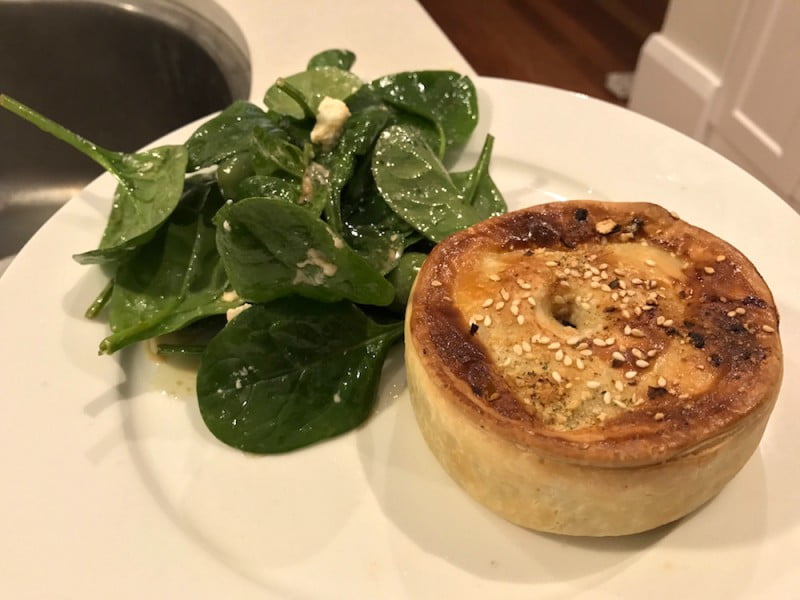 I follow these instructions, heeding Ryan’s advice about pouring myself a drink. With my pies in the oven, I whip up a quick and simple salad, comprised of baby spinach, Sicilian olives, goats cheese and a drizzle of olive oil. By the time I’ve done this, had a few generous gulps of my Cab Sav, the pies are hot and ready for eating.
Carving into the first pie, a warm plume of steam escapes from the flakey casing, carrying with it the divine aromas of the roasted chicken. Texturally rich, the chunks of chicken offset the smaller relics of pork. The sage and white wine stuffing gives the whole experience an added comfort factor, with the cranberries, garlic and onion cream offering a subtle flavour kick. Notes of lemon and orange zest may only be faint, but freshens up each mouthful.
Although it is tempting to demolish the entire thing myself, I practice restraint. After all, there’s still one more pie to sample. Making the first incision into the flakey pastry, the filling completely contrasts that of the first pie. It’s oozy, just like you would hope when cheese if is the first thing listed in the title. The butter braised white onion is again only subtle, the hot English mustard cream cutting through the white noise with it’s cleansing up-the-nose and down-the-throat effect. Unfortunately, the truffle oil is no where to be found, but perhaps this a good thing. The union of Red Cheshire cheese and hot mustard, a delightful one at that.
If these flavours don’t take your fancy, fret not. Ryan’s pie flavours change weekly, depending on the season and what takes his fancy. There will however always be a few constants on offer, like the Cheese and Onion and Beef and Bovril.
Reflecting on my first Broomfield’s pie experience, what I think I love most about Ryan’s pies is his unwavering devotion. It’s palpable in every direction. Waking up in the wee hours of the morning to hand made each pie. Standing in Manly Wharf’s gusty passageway behind his PieCycle. Meeting and greeting Manly locals. His story resonates with each decadent mouthful, and you can’t help but get caught up in the journey. Next time you’re hopping off the Ferry, I recommend saying hello and grabbing a pie. You’ll see what I mean.
If you can’t make it to Manly, Ryan’s pies are also available from 3/33 Dobroyd Road, Balgowlah Heights and a selection of farmers markets as listed below.
For more information and to check out Broomfield’s pies for yourself, click here

Wholesale and event enquires to ryan@broomfields.com.au or delivered straight to your door by FoodByUs.