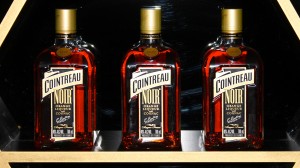 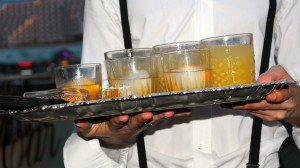 I was greeted at the door to the Cointreau Noir launch at Café Del Mar by my favourite sight in the world – a gorgeous man holding a tray full of drinks. On offer was Cointreau on orange-infused rocks with honey and almond, or a Cointreau with apple and soda water. It took all my willpower not to take one of each.
The launch was elegance embodied – Café Del Mar had been transformed beyond recognition with shining crystal and glass, flickering candles, blue silk and gilded mirrors. And of course, any excuse to look at beautiful men in sharp suits is fine by me.
Alfred Cointreau, the grandson of Edward Cointreau, was seven years old when he first shook a cocktail. His grandmother had told him that the most important thing was always to shake with a smile – advice he as followed to this day. Mr Cointreau demonstrated this to the gathered crowd by shaking a cocktail that he called the Cointreau Sangria. 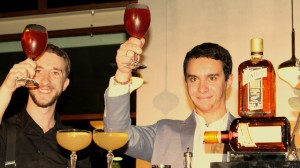 It’s made with Cointreau Noir, champagne, wine, orange juice, soda water, fresh fruit and ice. And it was delicious – better than any sangria I’ve ever had, and I’ve just come back from two weeks in Spain!
The only problem is that it’s much stronger than it looks, and I ended up wearing about half of it by the end of the night. (But apparently Cointreau looks as good as it tastes, because a guy who was hitting on me at the end of the night assured me that I wore it well!)
The gorgeous chef Ben let me watch him work as he prepared the Hors d’oeuvres, and watching him do all that hard work only served to augment the hunger. 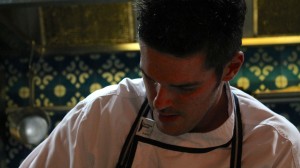 One of the reasons I was so excited to go back to Café Del Mar was because the food at the Bars March Launch – also held at Café Del Mar – has been in my dreams ever since. And I was not disappointed. The Spanish watermelon, fetta and cerrano appetiser was mouth-watering, as was the Chermoula chicken san choy bow. The Pig jowls with truffle mashed potatoes were every bit as good as I remember them. 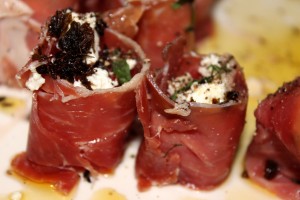 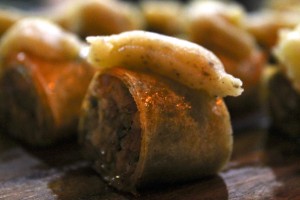 The tartar snapper with Spanish onion, toasted fennel, radish, parsley and salmon roe topped with lime juice was delicious, and the only problem with the mushroom and truffle risotto was that it wasn’t big enough. 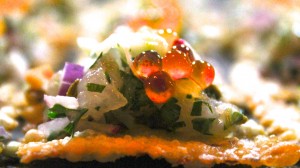 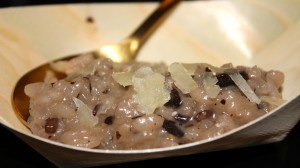 The Bressola dried beef with quail egg, tomato and truffle sauce tasted nothing like I expected but better than I could have dreamed. The black ink marinated salt and pepper squid with chilli was a little too spicy for me but I’m assured it was phenomenal. 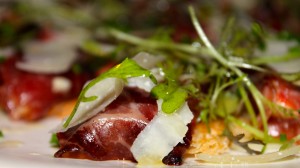 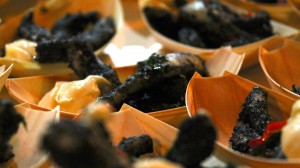 Entertainment was provided in the form of a beautiful violinist, in a dress that any A-lister would have been lucky to wear to the Oscars. Her upbeat music clearly affected some of the more inebriated partygoers, because dancing began to break out on the deck overlooking the beautiful Darling Harbour. 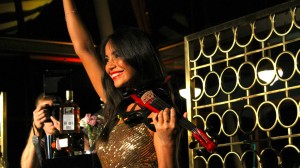 My final drinks were a pure Cointreau Noir and a Cointreau Noir shaken with vanilla and apricot. It was syrupy and delicious – like drinking a delicious pastry. I left thinking that if it was acceptable for breakfast foods to be alcohol-infused, then the world would be a much better place! 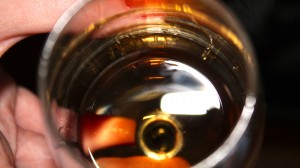 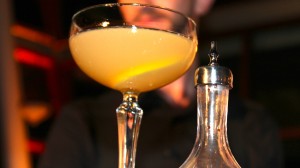 My final words is that if you, like me, often find Cointreau a little to orange-heavy, then Cointreau Noir is the answer to your prayers.
To discover more about Cointrea Noir visit their Facebook page: www.facebook.com/Cointreau
Thank you to Suntory for having us on the night.