Head to the Powerhouse Museum to catch this year’s best snaps in nature photography.

The Australasian landscape lends itself only too easily to awe inspiring photographs captured in our striking natural surrounds. Drought-stricken lands juxtapose vibrant aquatic worlds and the burnt orange desert sand. The result? An impressive showcase in the field of nature photography, as captured at the 2019 Australian Geographic Nature Photographer of the Year Exhibition.

Running from 16th August through until 20th October at Sydney’s Powerhouse Museum, the competition aims to shines the spotlight on the natural heritage of the Australia, New Zealand, Antarctica and New Guinea bioregions. Each year, photographers from around the world are invited to submit their nature and wildlife photographs, with over 2000 photographs submitted as part of this year’s competition.

Western Australian photographer Mat Beetson was announced as the winner of the 2019 Australian Geographic Nature Photographer of the Year with his incredible ‘Fin Whale’s Demise’.

Captured by Beetson while on a trip to Cheynes Beach in Albany, WA, the drone shot sees a beached Fin Whale being circled by sharks. The photograph is the competition’s first drone picture to be chosen as the overall winner, and was selected by a panel of judges from a selection of over 2000 submissions.

Competition judges Justin Gilligan, Glenn McKimmin and Tui De Roy said: “Despite seeing millions of nature photographs over the decades, we have never seen anything that remotely resembles this image. Unique and exciting, it reveals incredible beauty in death.” 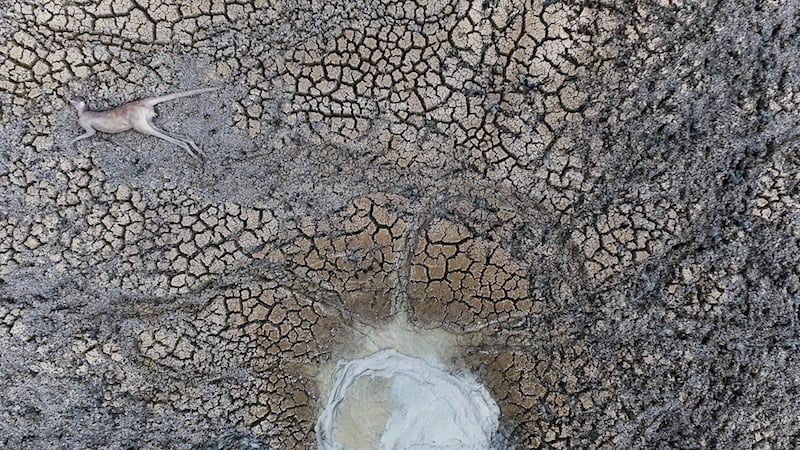 Other jaw dropping snaps include The Watering Hole, captured by Melissa Williams-Brown. Having made several trips out to Menindee Lakes in regional NSW, she captures the tragic reality of a drought-striken watering hole, where dead and dying animals can be found clinging to the dried mud.

Produced by the South Australian Museum, the exhibition is now open and will run until 20th October at Sydney’s Powerhouse Museum.