New, modern and contemporary creations don’t necessarily mean a loss of tradition. ARISTOTLE’s owner, Maria O’Meagher, understands the importance of the authentic Greek ethos of ‘philotimo’, in Greek dining. This is preached above all else in Greek hospitality. Ensuring the needs of the guest are put first, and that spirit and passion are prioritised in every detail, is essential. Our experience at ARISTOTLE’s proved that these traditions in food and service, are still very much around in modern dining. As our quirky waiter Miguel pointed out, their owner, Maria, has thought of every detail. Having worked as an architect and designer, as well as managing and designing Dee Why’s ‘The Crazy Donkey’. The architecture, the details, the service, the food and the drinks were all sprinkled with her finishing touch of ‘kefi’, separating this restaurant from the rest. 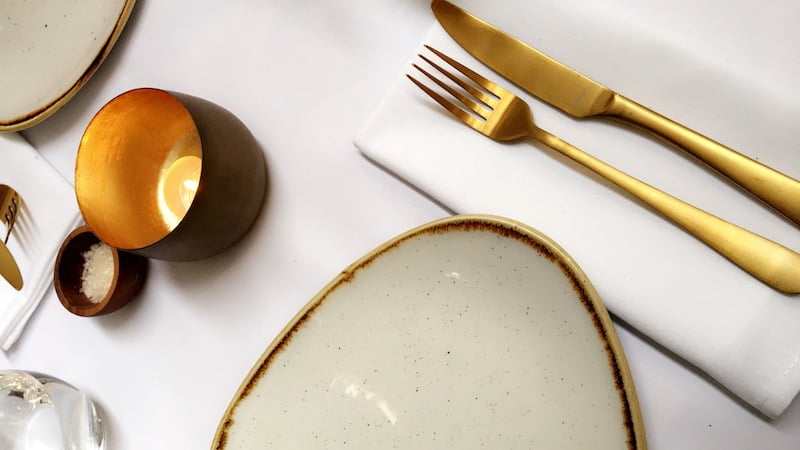 Being Greek and growing up on yiayia’s homecooked food our epectations were high going into Aritotle’s. Like all good Greek meals the menu here is designed to share, preferably with lots of friends and loved ones. You can either choose from a range of mezes, small plates and larger plates or stick to the ‘Aristotle’s Table’ set menu ($55 per person).
We went with the set menu, adding our own extras that sounded too irresistible to miss. 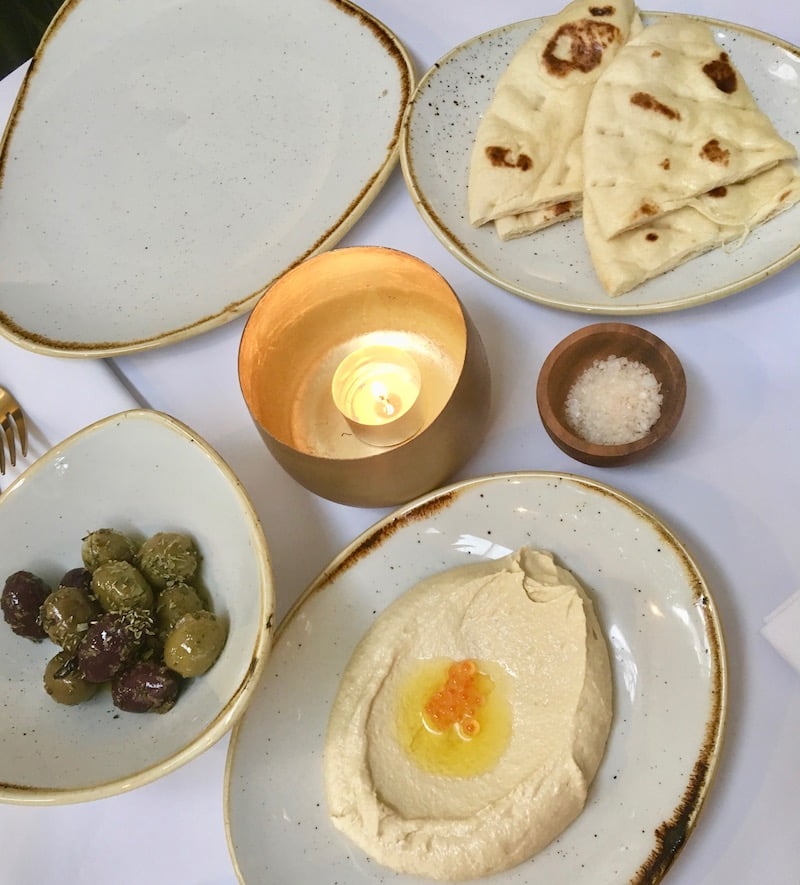 Every good Greek meal has to begin with a doughy, chargrilled pita bread, fluffy taramasalata, and marinated olives. The taramasalata was made with white cod’s roe and lemon, giving it a zestier finish with a less salty aftertaste. 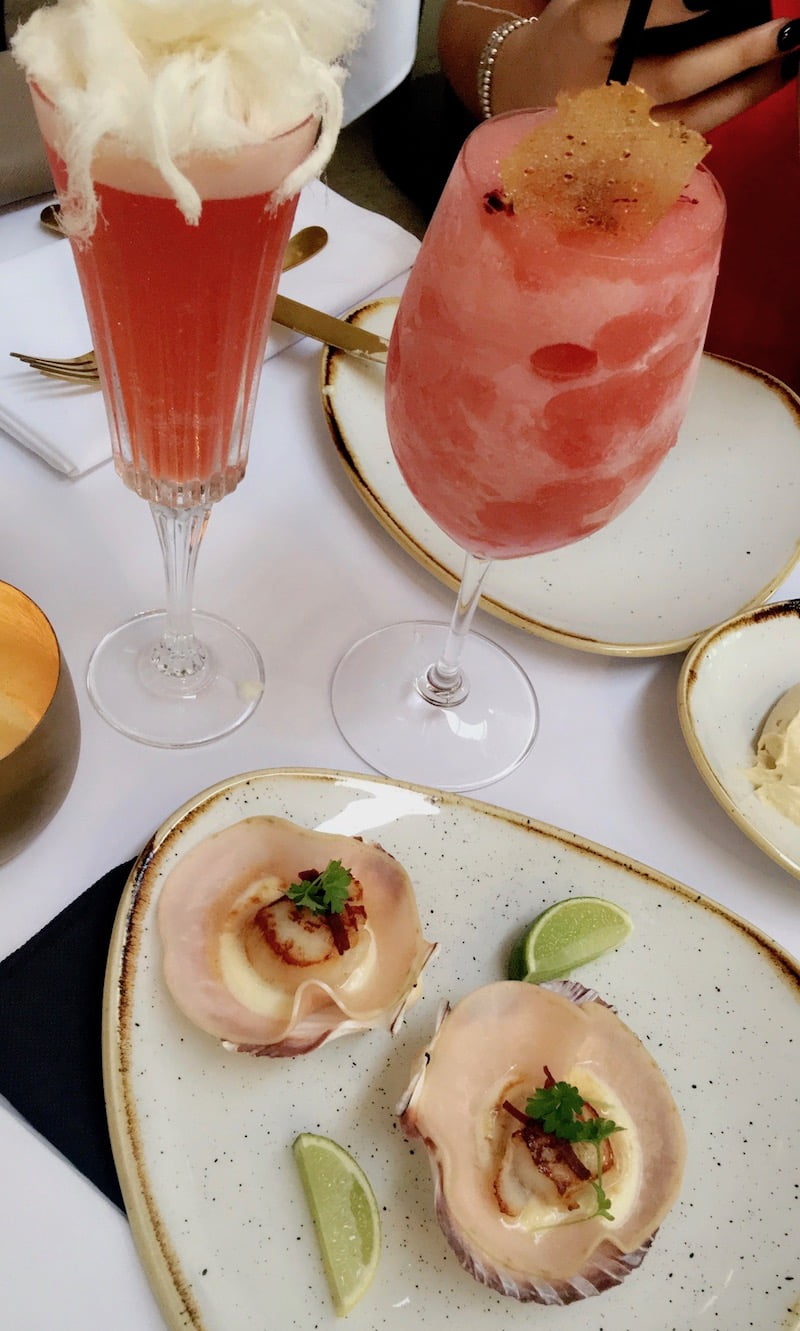 We also ordered some cocktails. The ‘Scarlet Asteria Frosé’ ($17), consisted of Fjordland Blue Duck Rare Vodka, Chambord, Greek rosé and watermelon, in the style of a frozen slushy. The ‘Greek Goddess’ cocktail ($17) was made with Sipsmith Slow Gin, Campari, Peychaud’s bitters, pink grapefruit, Greek Prosecco and topped with a vanilla pashmak.
Seared scallops came highly recommended and we weren’t dissapointed. Presented on a bed of pastourma, they were then topped with a pickled kohlarbi, cauliflower purée and fennel. A wedge of lime added a bit more zest, while the scallop, cauliflower and fennel all provided a milder taste. Scooping them all up into the pastourma and taking one big bite, added a saltier taste to the mild flavours. This dish was a creative take on modern Greek seafood that left us hungry to see what was next. 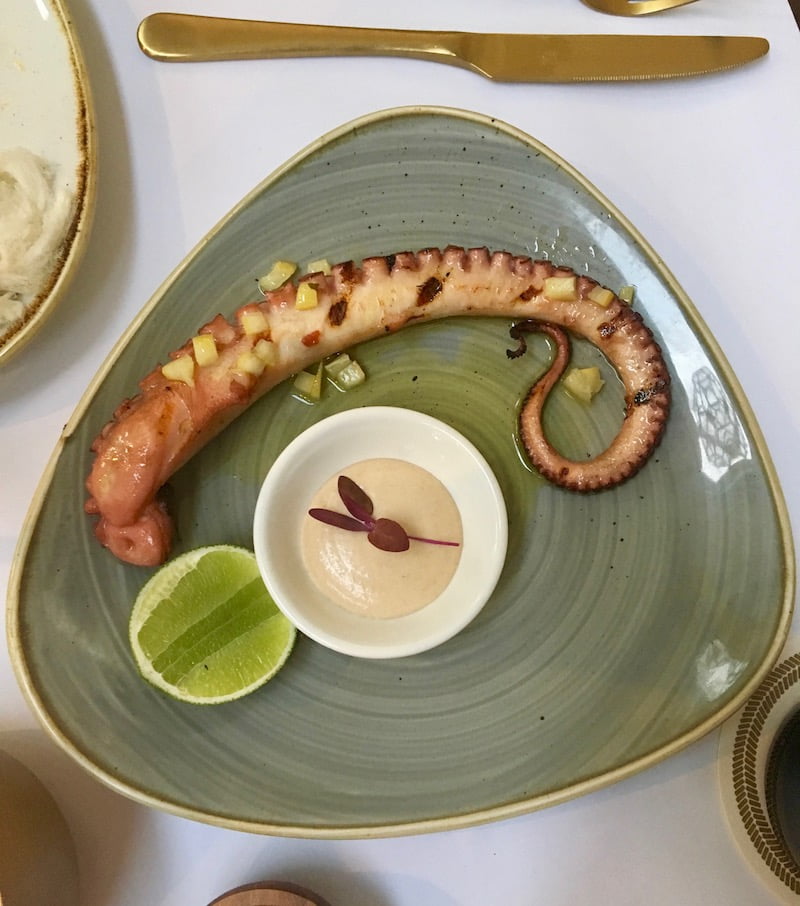 The chargrilled octopus was definitely a highlight. It was one of the softest, perfectly cooked pieces we’ve consumed. In order to keep the taste fresh and light, the octopus was drizzled with garlic, chilli, parsley and lemon. 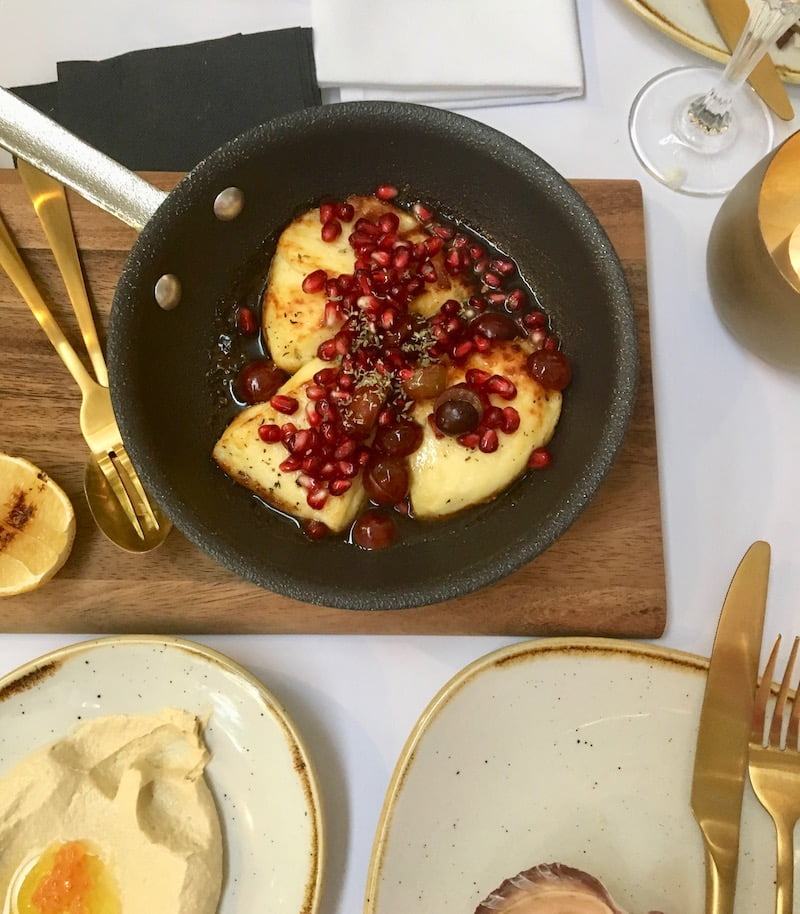 Haloumi is usually a safe bet at Greek restaurants. Though, it’s much harder to perfect than you think. You want to cook it enough to get it as soft as possible, but not too much that it over-grills. You’ll also find, it basically needs to be consumed as soon as it’s served. Or else you’ll feel like you’re eating a rubbery piece of salt. Coming in with such high haloumi expectations, we were completely blown away by Aristotle’s haloumi. The pomegranate, red grapes and honey subdue that sometimes overbearing salty taste. The balsamic made sure the salty zest was still there, with the cheese remaining as fluffy as a cloud coming served in a sizzling pan. 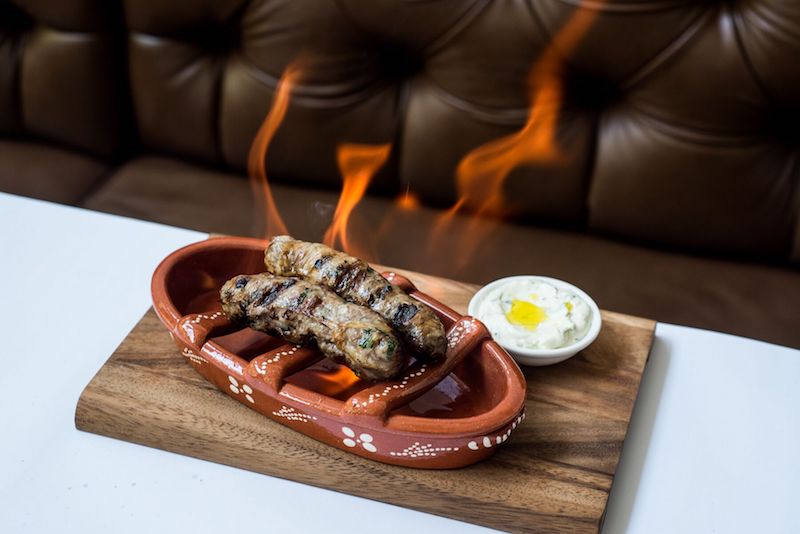 The barbequed Cypriot sausages were lit! No really they were lit on fire right before our eyes. Once all the commotion had been extinguished we tried the beautifully smoked meat which complimented the natural spice of the sausage. And what better side dish to go with this than a big bowl of tzatziki with lemon? 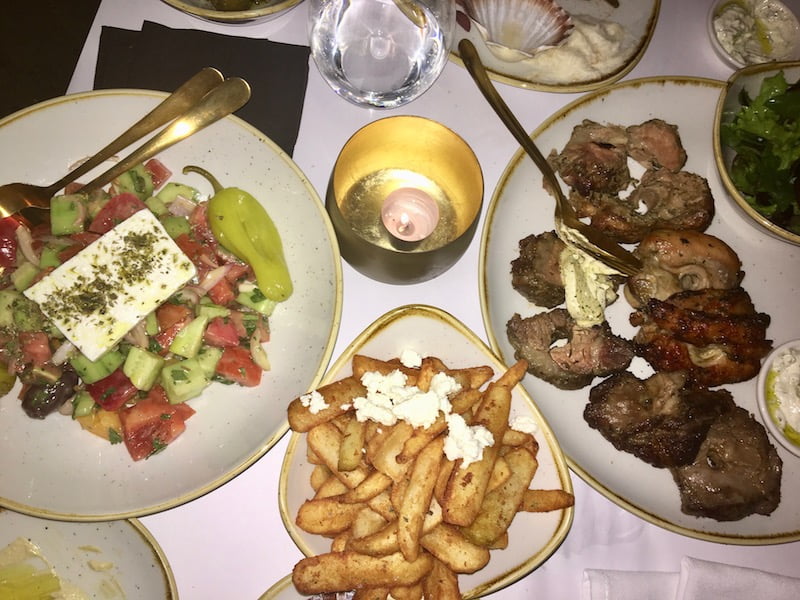 Sorry did you think we were done? So did we, until a selection of spit-roasted beef, lamb, chicken and pork came out. All the meats came topped with lemon and oregano spices for a home-made finish. Tzatziki and an Athenian-imported butter with a light spice complemented the soft meats perfectly. Greek salad and chips topped with feta tasted just like the ones we’ve had in Greece. 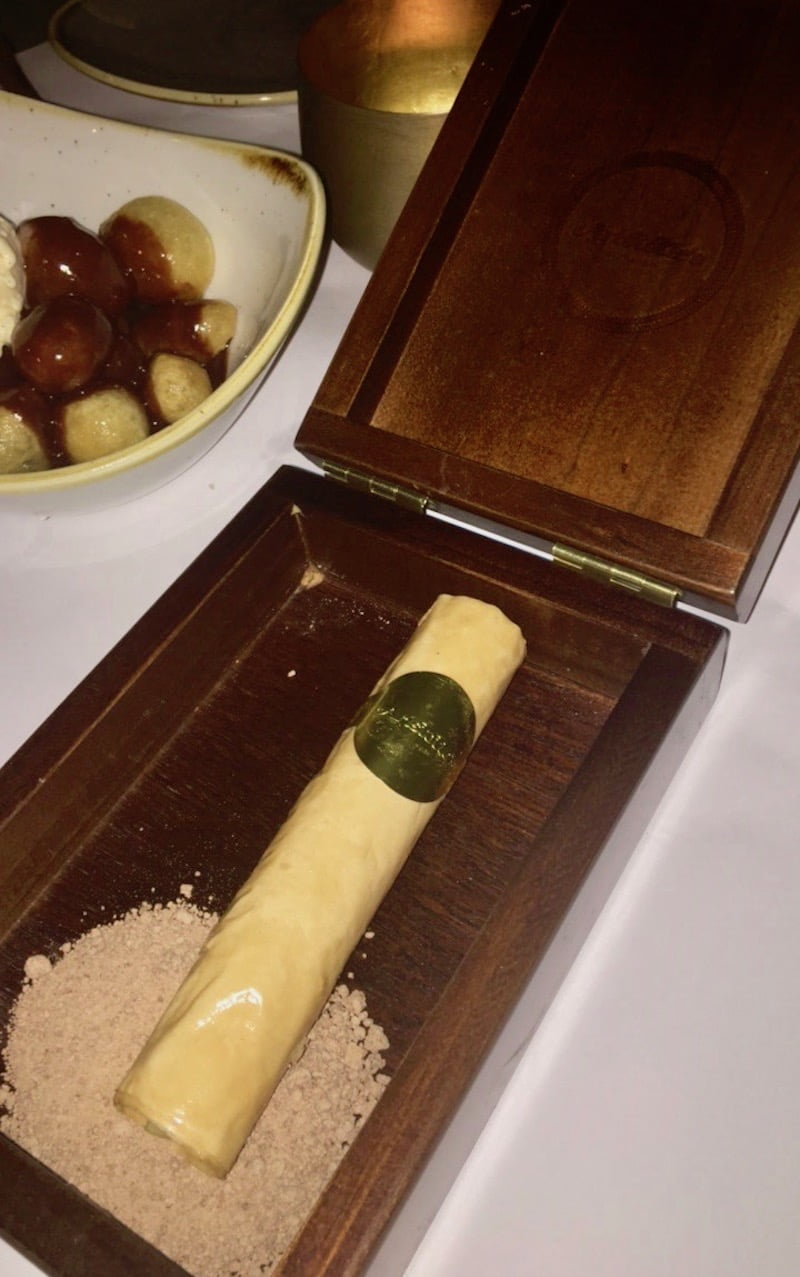 Then it was time for dessert. We absolutely fell in love with the Pistachio Baklava Cigar. They were served in custom ARISTOTLE’s cigar boxes, which were perfectly presented. The idea stemmed as a tribute to Aristotle Onassis, who was infamously presented his post-dinner cigar in the exact same fashion. Adding a wave of sophistication and a snippet into the life of the rich and famous of the 50s. 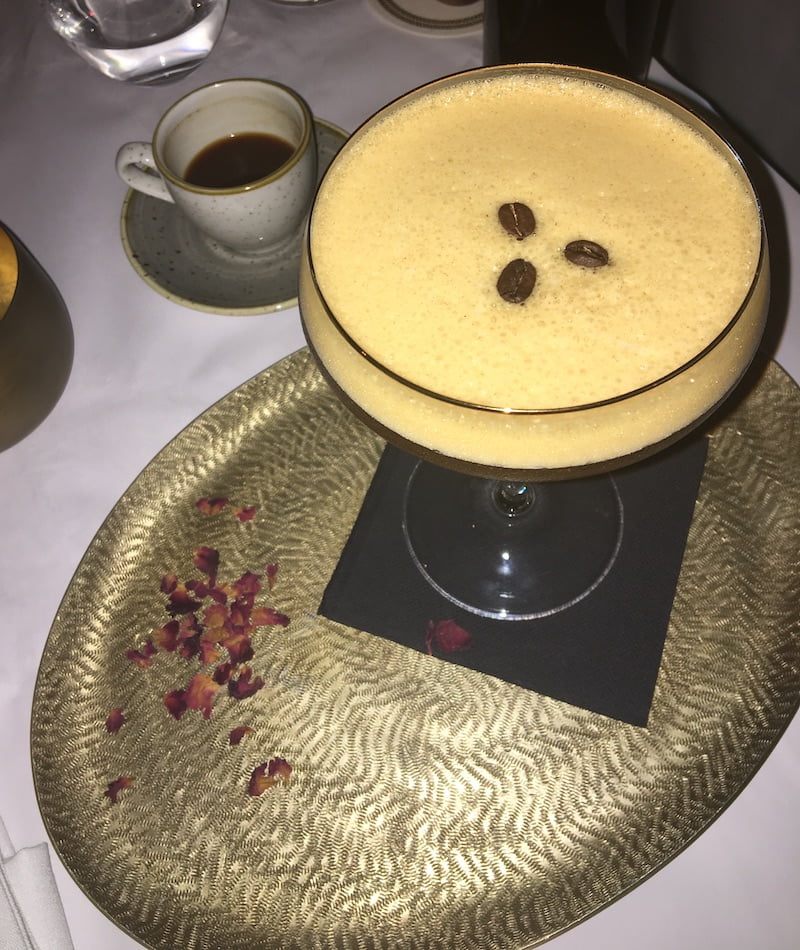 Everyone’s favourite pick-me-up cocktail, the espresso martini was gorgeously presented on a consistent gold-themed platter. The espresso bitterness was at a minimum, which was personally appreciated. With a light cacao taste and smooth vanilla running throughout. 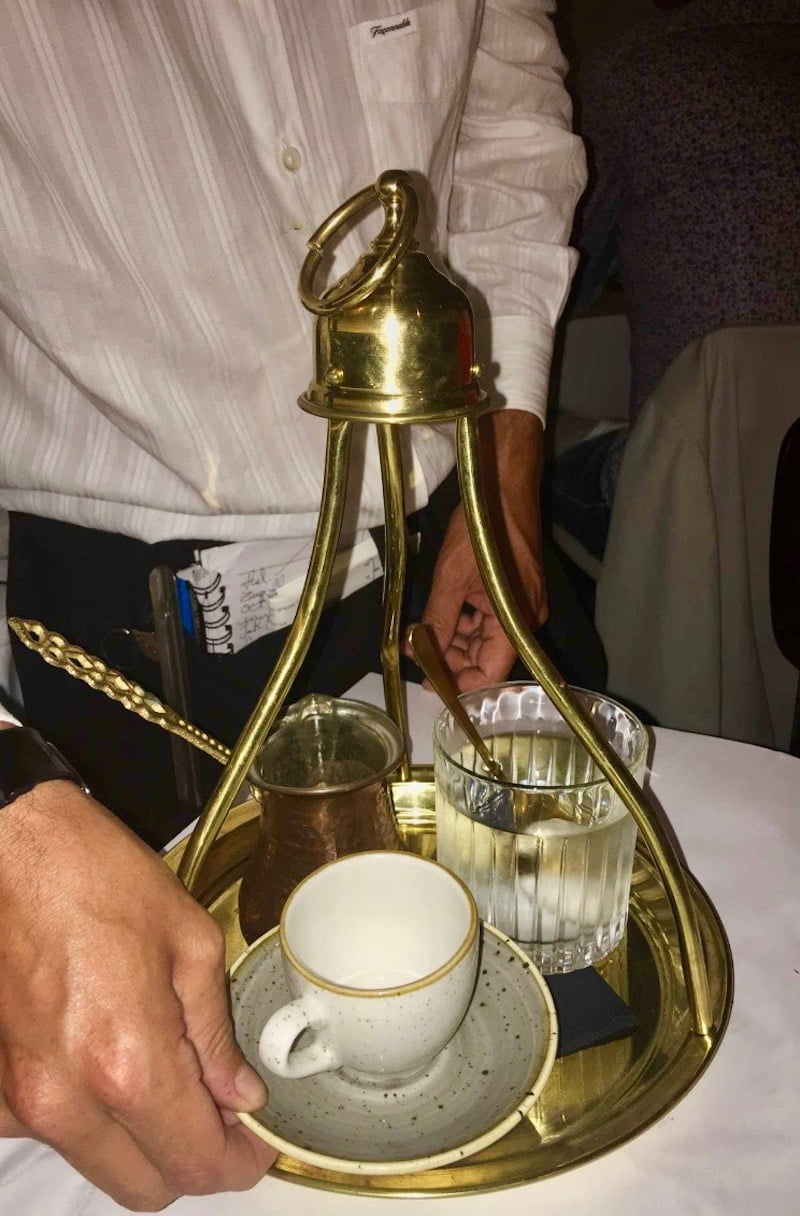 The traditional way to conclude a big meal is with a Greek coffee. Served in an extravagant, gold tray and poured in front of us to ensure it’s consumed fresh. Sweetened cold water is a very traditional practice that is served with your coffee, to soak up the bitterness of the coffee.
We were blown away by the authenticity, and respect for Greek tradition at ARISTOTLE’s. We’ll definitely be visiting again with our big Greek clan!
ARISTOTLE’s Neutral Bay
Shop 1 24 Young Street, Neutral Bay NSW 2089
(02) 8969 6900
Open for Dinner, Tuesday-Friday from 5pm, Closed Mondays.
Open for Lunch Thursday-Saturday, 12pm-2.30pm.
www.aristotles.com.au