There is a New York Bakery in Sydney. Sounds like the start of a joke but we’re serious about how much we like this place.
Brooklyn Boy Bagels have settled into Matraville, and are selling their wares like  Brooklyn style bagels!
The bagels are hand rolled, undergo fermentation and then boiled in the authentic style of NY. You will find Founder & Dough Raiser Michael Shafran behind the 1930’s cash register, making bagels in the bakery or at a farmers market selling his sought after treats!
We caught up with Michael recently to find out a bit more about his booming business. 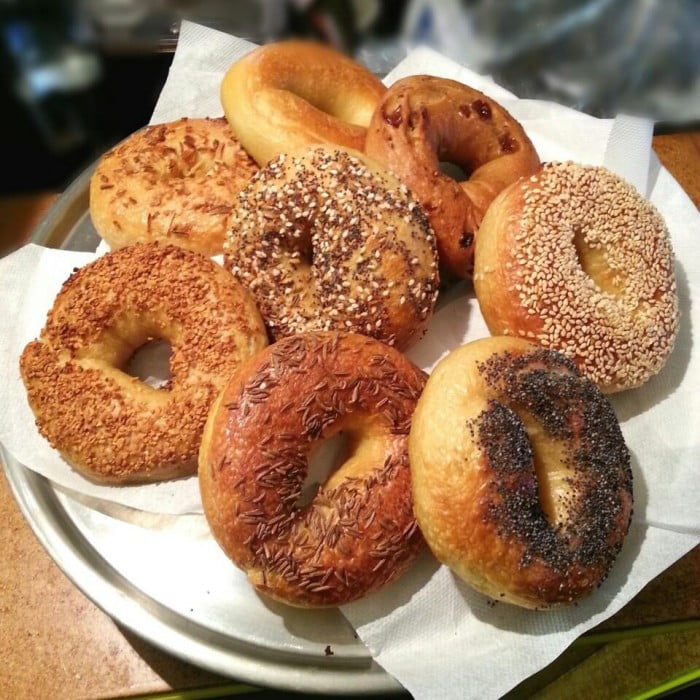 1. What inspired you to start making bagels?
I first came to Australia in 2001, and after a time, I started craving my normal Sunday morning routine in New York: you get up, grab a copy of the NY Times, score a bagel with cream cheese and choose between a pint of Tropicana orange juice or a cup of ‘cawfee’. I visited one Bondi bakery selling bagels, found it to be a fairly repulsive excuse of a bagel, all fluffy and tasteless, and then tried more. Once I ran out of places to try, people sent me to the bagel shops in Melbourne. And I found the same result.
So while I was working as the Chief Sub-Editor of Delicious magazine, I convinced our assistant food editor (Chrissy Freer, who now works on lots of cookbooks) and her then-boyfriend Luke Burgess (now among Tasmania’s best chefs and who just closed his beloved Garagistes) to make bagels with me at a brunch party at my terrace house in Paddington. I researched a ton of recipes online, chose what sounded to be true to me – including one called Real Honest Jewish Purist’s Bagels that had a crazy passionnate manifesto that talked about how skipping certain steps would breach the Geneva Convention – and then we made the bagels. They came out as wrinkly as a Sharpei, but they tasted amazingly close that the kind of chewy, malty, boiled bagel that I wanted from New York. 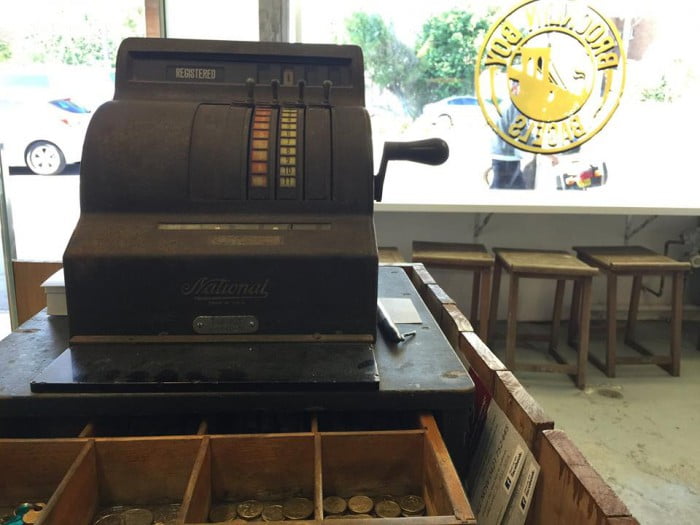 I did bagel brunch parties for years and people would always suggest that I start a bagel business, so it was always in the back of my mind. I came to a point where I had a cookbook deal and a TV production deal, and both fell through within two months of each other. After that, I didn’t want to have to rely on anyone else for my own success, so I decided to do a pop-up as a test case for my own business. So I was given free time to practise at a kosher kitchen in Bondi called Our Big Kitchen, and then convinced the owner of a cool small bar in Darlinghurst called Darlie Laundromatic to let me use his bar for the pop-up. I put it up on social media, convinced a bunch of friends to help me out (included butter maestro Pierre “Pepe Saya” Issa), and put it out on social media. When we rocked up, there was a massive line curling around two city blocks! We sold out of hundreds of bagels in 1.5 hours and turned away others who had been waiting in line for up to an hour. It was insane, but told me that maybe someone else besides me cared about NY bagels being baked properly. 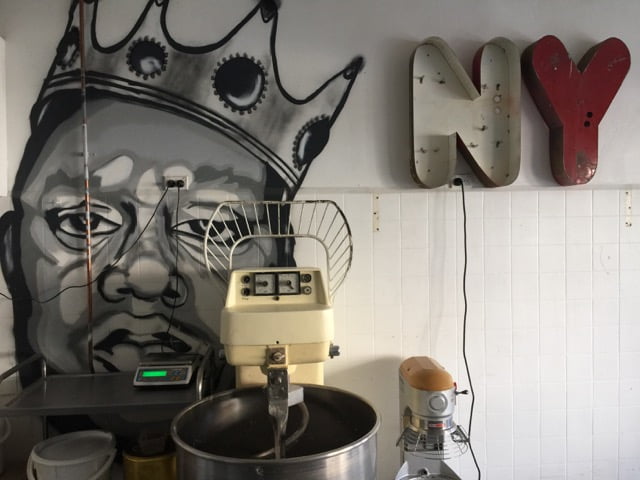 Since then, the reception has been incredible. Especially from North Americans, who know what a real bagel tastes like (well, most of them), and are constantly sending us thank-you emails about giving them a food experience that transports them back home. Every now and again I do get someone complaining about the price, since they’re used to having cheaply made bagels for half the price. But usually when I take the time to explain to people the difference between a manufactured, tasteless product that takes mere hours to make, and our artisan process of handrolling, long cold fermentation and boiling, they usually get it. There’s a lot of labour and love that goes into everything that we do, and you can clearly taste the difference. Just the complex, long fermentation process alone will give a rounded flavour that you can’t recreate with a bagel that was made by cutting corners. 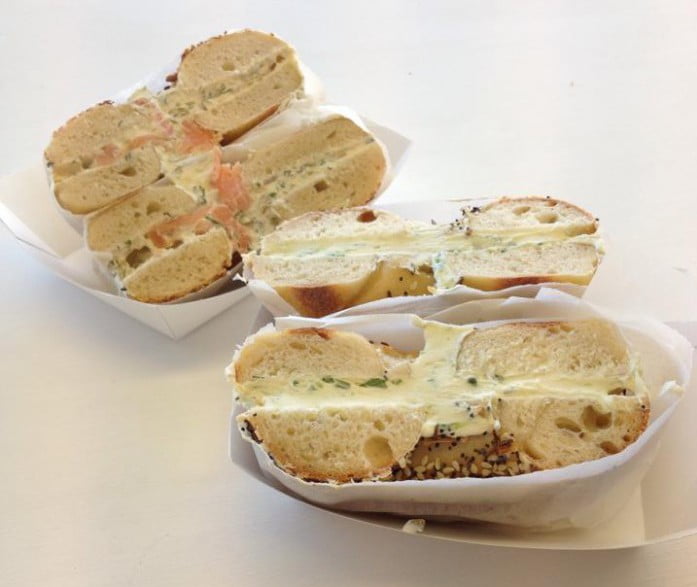 I’ll first tell you what they’re not: they’re not – blueberry bagels, chocolate bagels, cheese bagels or sundried tomato bagels. All of those flavours came into play when bagels finally left New York and got gentrified in the Midwest and California. Real New York bagels come down to a simple selection: Plain, Poppy, Sesame, Garlic, Onion, Salt, Egg, Pumpernickel, Rye and Everything. The only sweet variety is cinnamon raisin. That said, I have thought of doing an “unauthentic” bagel selection, including a blueberry bagel without that crazy sugar coating that local bakers here decided to do. To me, that’s a donut (or doughnut, if you’re so inclined). And if you want a donut, wouldn’t a real donut taste better? 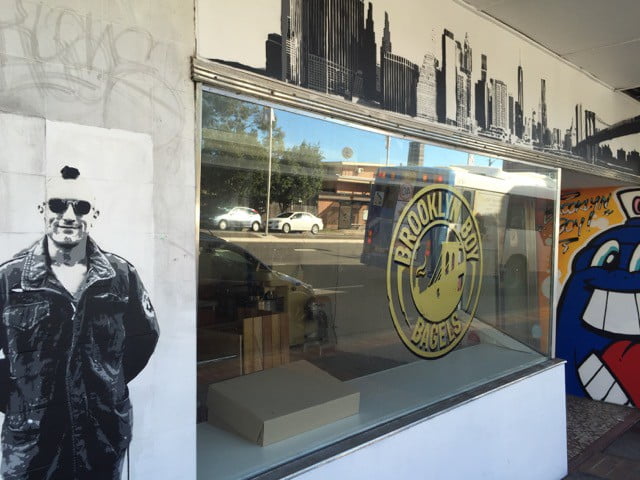 I originally chose Matraville simply as a production space. I needed to move out of the shared kosher kitchen that we were in, since we had run out of room, and I needed to grow my wholesale and farmer’s market business. Matraville was a cheap place to set up and it had all of the infrastructure I needed: a large coolroom, ventilation, grease trap and the like. What it also had was an ugly, depressing frosted front window, so I replaced it with a clear glass window with our shiny gold-embossed logo on it. Once the locals could see us baking inside, they started popping in and asking us if they could buy bagels. At the same time, being in Matraville allowed me to realise that it and its surrounding suburbs have been gentrifying quite a bit – it’s probably the last semi-affordable part of the Eastern Suburbs – and that the locals had very few options for good food and coffee. And no options for bagels and challah, of course! 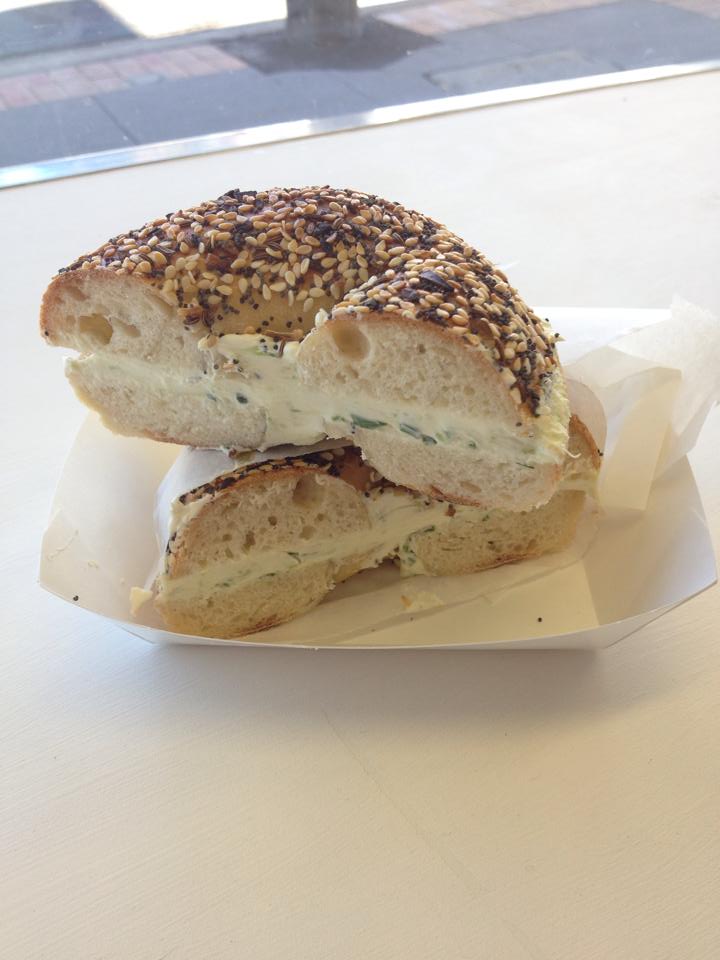 These bagels are like having children, I love them all, or else I wouldn’t make them. But the Everything bagel is our most popular. It’s a multi-seeded combination of poppy, sesame, garlic, onion and caraway. It’s full-flavoured and tastes as good as it looks. I love having it with our garlic, chive and spring onion cream cheese. I’m also loving having our new gluten-free bagel, since it is bringing in a whole bunch of the healthy and holistic-living crowd, who I identity with a lot. 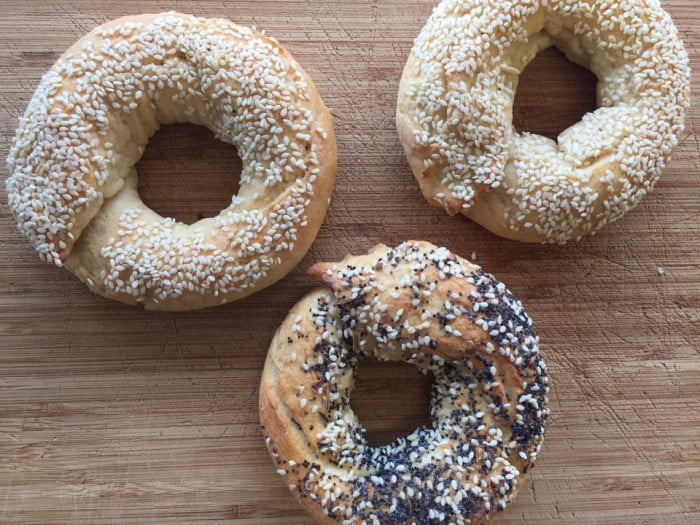 We’ll certainly outgrow our current space, so I’ll be looking to find a bigger production bakery for us in the next year or so. And I’ve been sitting on a full cafe menu for the past two years, so I’d love to have a 40 to 50-seater cafe where we can show the full vision of what we want to do. Brooklyn Boy Bagels is an expression of my love affair with New York, so everything I do is a way of bringing that feeling of my home city to Australia. There’s so much more in terms of food that I want to do. And I want space for at least one kickass pinball machine. 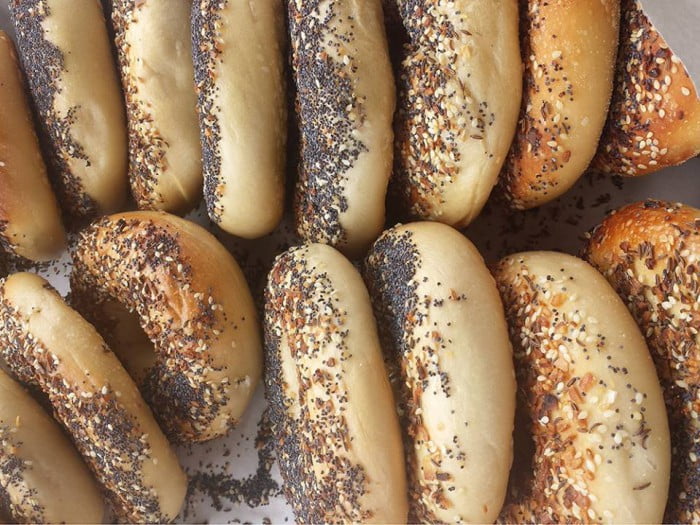 I like fine dining, but I never like sitting too long, so I usually opt for places that are intimate and comforting. Some of my favourites on the upper end included the wood-oven focused menu at Ester in Chippendale, and the modern-Korean flavours at minimalist Moon Park in Redfern. And I’m a pizza nut, so I usually bounce between Da Mario in Rosebery, Pizza Lucio in East Sydney (and visiting their new Rosebery site is at the top of my list), Gigi’s in Newtown and Via Napoli in Lane Cove. And for old-school places, I have a special place in my heart for Mere Catherine, this tiny four-seat Lyonnaise eatery in Kings Cross. It’s a bit of a hidden gem. My locals are Spice I Am, which is still doing great Thai food after all these years; Haymarket’s Chinese Noodle restaurant for its handled noodles with pork mince and crazy cheap prices; and Petaling Street, which was introduced to me by a Malaysian ex-girlfriend and for which I still go to for a noodle dish that translates to “rats tails”. 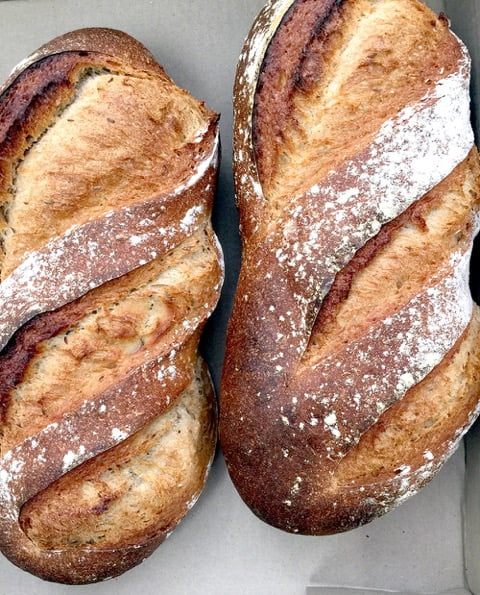 I love my whisky, so you’ll find me over at Surry Hills’ Wild Rover quite a bit. I’ve lived in Surry Hills for five years, but some of the bars are now a bit too sceney for my taste, which is my I also love the laid-back atmosphere at the Golden Age Cinema, which pours a mean Negroni. If I’m going to do wine, I’d rather go Italian, so any time I want vino, 121BC is at the top of my list. And if I’m fancying a cocktail, it’s a no-brainer: Darlinghurst’s Eau De Vie still pours the best tipples in town.

As a start-up entrepreneur, I don’t get a lot of free time, so I spend a lot of my time doing yoga, especially Yin and Vinyasa Flow. My main studio is In Yoga in Surry Hills, which is a beautiful space with fantastic instructors and a very zen feel. I’m a bit of a yoga floozy, though, so I also have ten-passes at Bondi’s Body Mind Life, Redfern’s House of Yoga and Botany’s Bottanix (great garden view from the yoga matt), all of which are fantastic yoga studios.
In terms of going out, one of my favourite things to do is to go the biweekly High Tea at Surry Hills’ Hibernian House. For very little money you get to see amazing acoustic music acts while you sit on the floor or on random vintage furniture, all while you drink tea or your BYO wine (in a teacup, of course). My most memorable music night was seeing Courtney Barnett, just before she broke out as a national music star, playing support guitar for a friend of hers. She was so close, I could have probably tied her shoelaces. 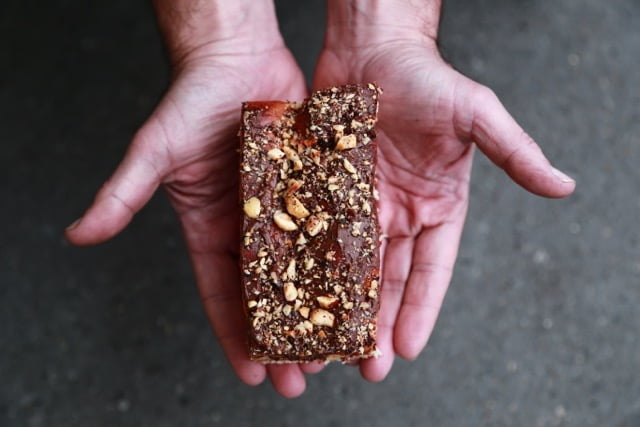