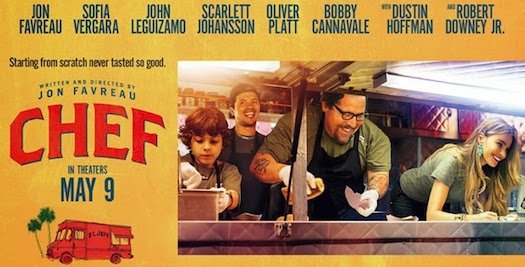 This film is like the puppy that fails puppy preschool but makes all the other dogs happy. Chef makes mouths smile and stomachs grumble, a film that makes you remember why people go to the movies!

After a series of unfortunate events involving Dustin Hoffman and an abuse of a Twitter account, Chef Casper finds himself unemployed, unambitious and kind of depressed. Luckily, his ex-wife, Sofia Vergara, whisks him away to Miami with his son Percy to help him get off his ass and get his life back on track.

The unapologetic close-ups of food make you drool in a way that is thoroughly indecent in the company of other moviegoers. In the scene where Casper cooks his son a grilled three-cheese sandwich, you could almost swear that you could smell the butter sizzling and the cheese melting. I could practically taste the bacon as it crackled in the pan. This film is FoodPorn to the max, and every second of it is enjoyable.

A hilarious cameo by Robert Downey Jr. and small roles for a brunette, tattooed Scarlett Johansson and an angry Dustin Hoffman only add to the film’s success. Along with the rest of the cast, their acting is impeccable and the humour just keeps on coming.

But the film does unexpectedly touch on some deeper, unexplored themes in a surprising manner. The unsteady relationship between chefs and food critics is played out in an almost-violent manner early on. The enormous power of social media is explored through Casper’s misunderstanding of the medium, and his son’s expert use of Twitter to publicise his father’s business. The father-son relationship and growing up the child of divorced parents also crops up, although the parents are amicably divorced and the son does have a good head on his shoulders.

Put it this way: if you like any one of the following – food, boobs, bandanas, food, kids, road trips, the underdog, food, the F-word or food – you will love this film.

Chef opened in cinemas May 8th.